SIX OF THE BEST… decluttering ideas

As you know by now, I’ll be moving in about two months, and one of the best parts of moving is decluttering and downsizing.

See, I have a ton of stuff. Just random crap that I’ve accumulated over the years. Things I’ve brought with me from apartment to house to apartment to house. Things I haven’t actually looked at in maybe a decade. And now that we’re moving to a smaller place with fewer closets and rooms, it’s time to make some hard choices. I’ve already thrown away five boxes of stuff (and numerous trash bags), and sold fifteen boxes of books, CDs, DVDs, and magazines to our local used bookstore.

Now I know that nerds like to hold onto things. We never know when we’ll need something, or want to read something again. But I’ve got six of the best decluttering ideas for you to consider — even if you’re not moving — and I’ve broken them down into things you need to get rid of. 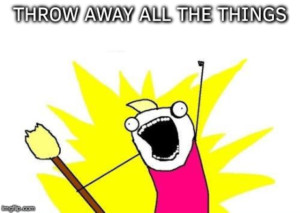 6. Books — This is probably the biggest offender for any nerd, because we all love to read, and we have all bought (or otherwise accumulated) hundreds of books over our lifetimes. Some of the books I got rid of were ones that I’d had since high school, and that was two decades ago. None of them were collector’s items; they were just books that I liked. I did manage to sell a lot of them on Craigslist, but even after getting rid of three full boxes I had too many, and they were just sitting there, not even displayed on shelves. If I’d put books on every flat surface I owned, I still wouldn’t have had room for them all.

What did I keep? My Discworld books, anything by China Mieville and Neal Stephenson, and a few things that I know will never come out electronically.

What should you get rid of? I don’t care how much you love the books you have in boxes or on shelves; if you haven’t read them in over three years, and you have no sentimental attachment to them (as I do to Villains by Necessity), then it’s time to say goodbye. 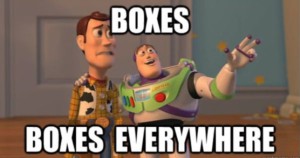 5. DVDs and CDs — Coming in at a close second are DVDs and CDs — physical media that we’ve bought over the years, often from secondhand stores, and probably haven’t listened to or watched in just about forever. My two boxes of CDs hadn’t been touched in at least five years, and when my fiancee and I went through our DVD collections, about 90 percent of our choices for elimination were easy ones. I even got rid of the first Blu-Ray I ever owned.

What did I keep? Several full-series box sets, all the Star Trek and Star Wars films, anything my daughter might like, and a few sentimental keepsakes.

What should you get rid of? If you have a film or album in digital format that you can download to your hard drive, it’s safe to get rid of. If you’ve only bought a license to it, and you have to listen to it off Amazon’s or Apple’s servers, you should keep the physical media. 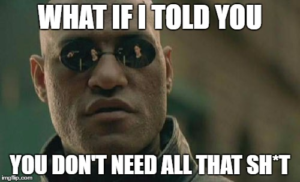 4. Backup Disks — Remember back in the 90s how long it took to back up a hard drive? Everything went onto 3.5-inch floppy disks. Ridiculous! (That said, I do still have a small drawer of floppies, even though I don’t have a working 3.5-inch drive anymore.) But with the advent of inexpensive writable CDs and DVDs, it became a normal thing to back up our hard drives. I found at least ten spindles (each holding 50 or 100 discs*) with media that I just didn’t care about anymore. They went right into the trash… after I checked the ones that were labeled with interesting music or video files.

What did I keep? Not a lot. Mostly discs that have fan films downloaded onto them.

What should you get rid of? As much as possible. You don’t need those backup disks. Trust me. Especially if your main device doesn’t have a physical media reader, as many new MacBooks don’t. 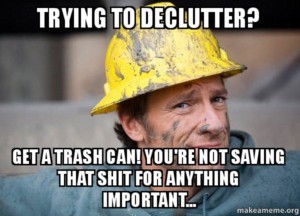 3. Things in Boxes — Every time you move, you find random crap that you didn’t expect, and you just throw it into boxes, label them, and move on. When you’re about to move into your 12th home in 20 years, you’ve got a lot of those boxes accumulated. It’s just a fact of life. It’s time to go through those boxes and decide what you really need. I got rid of so many things that I didn’t care about (like a box labeled “golf gifts”), hadn’t looked at in ages (my old school newspapers, which I mentioned in last week’s column), or didn’t need anymore (like the lunchbox I used to use for office supplies when I was a college English instructor). At least four boxes of crap went to the dumpster, and another one came to the office for the “please take these free items” table.

What did I keep? Almost nothing. My old stuffed animals, some photos that I haven’t gotten around to scanning yet, and a few technology items that I never managed to install.

What should you get rid of? If you haven’t taken it out of the box since you last moved, it’s time to seriously consider eliminating it. Old schoolwork should be scanned and tossed; unused binders need to go; even old computers can be eliminated (just take out the hard drives first). Hell, I got rid of four computers during this purge, keeping only the hard drives, and only until I can take them to one of those data shredding places. 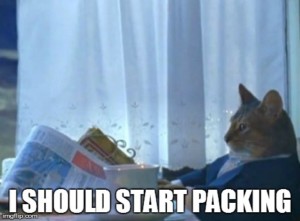 2. Clothing — I periodically go through my clothing for things that I don’t wear or aren’t in good shape anymore, but I’ve never done anything like what my fiancee did earlier this month. She’s lost more than 30 pounds since December, and a lot of her clothes didn’t fit anymore — in the good way. She emptied out her side of the closet and tried on literally everything, and when it was all said and done, she’d kept less than half of what she owned. She’d also found several things that were too small last year, but are too big right now.

What did she keep? Anything she could wear to work, anything that fit and was flattering, and anything that was still a little too small.

What should you get rid of? Google “get rid of your fat clothes” and you’ll find tons of articles like this, which say you shouldn’t keep anything that’s too big. I get that, but as someone who lost 75 pounds and then gained it all back, that’s a big step. I’d say you should set aside anything that’s too big and hang onto it for a year. If after that year it’s still too big, it’s time to get rid of it. Most of it can be sold online to people who it can benefit. Clothes for fluffy folks like myself are expensive, and if your too-big clothes are in good shape, you’ll definitely be able to help someone else out.

1. Cables — Oh, boy. This is a big one. Since 1999, when I first moved into an apartment with my then-girlfriend, I’ve had at least one box of miscellaneous cables. I guarantee you’ve accumulated a plethora of power cables, printer cables, audio cables, television cables, hard drive cables, ethernet cables, and phone cords. When I cleaned out my spare bedroom, I found four boxes worth of these. I got rid of at least half of them. I only own one desktop, so I only needed one spare power cable; the other ten were tossed. So were all the phone cords (I don’t have a house phone anymore) and all the cables from computers that no longer exist. It was time.

What did I keep? I’m in a bit of a different situation because I have a small studio. I need to keep the extra audio patch and microphone cables that I’ve bought for when I hook up microphones and instruments for recording purposes. Yes, okay, that hasn’t happened in a while, but they don’t take up a lot of space. Ultimately I have two boxes of cables remaining — one for audio, and one for everything else.

What should you get rid of? Anything that plugs into a device you no longer own. If you have adaptors, keep those, because they’re small, but you don’t need the cables themselves. You can get them again, and they probably cost less now anyway. 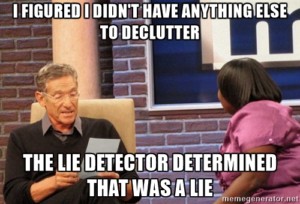 After we signed the lease on our new place, my fiancee and I put together a timeline for what needs to get packed and when, based on usage. I expect to get rid of at least 25 percent of what I own in the process.

Our timeline also includes the points where we need to complete certain tasks. Because as good as you might be at moving and getting everything done, you’re going to forget something. It’s going to happen. Accept it, plan for it, and be prepared.

And get rid of more stuff in the process. 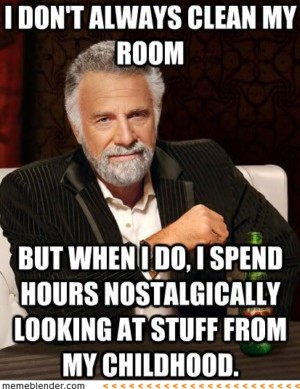