SIX OF THE BEST… contemporary changes in etiquette rules

I’m 38 years old. I’ve lived in five different decades. In that time I’ve seen many things change — among them, rules of etiquette that, while once absolutely required, are now optional. At best.

And with my wedding coming up in less than a month, you can damn well bet that I’ve been reading up on etiquette rules. Here are six of the best changes to them — mostly due to technology. At least, these are changes that I think are correct; your mileage, of course, may vary. 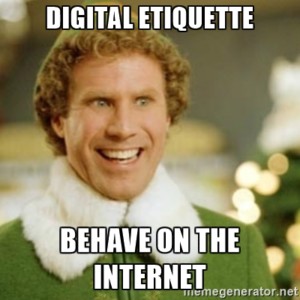 6. Evites and Facebook Events — While Facebook Events requires you to have a Facebook account and Evite uses literally dozens of trackers on their site (and sells the data), these products (and others like them) are amazing. You can save a ton of money on invitations and stamps; you never lose your list of who’s coming and who’s not; and if you need to make a change or send an update you just have to click “notify guests”. They’re also a boon to people who hate making phone calls just to RSVP for something.

But not when… …you’re getting married. Unfortunately, weddings still require a degree of formality not seen in most other event types. I have yet to be invited to a wedding via Evite or Facebook, and I have yet to RSVP to one that doesn’t require putting a card in the mailbox. For my upcoming wedding, every invitation cost us almost a dollar in postage alone (including the RSVP cards) — and we didn’t spend a bunch of money on our invites. For people who send out the ones with inner envelopes, tissue paper, multiple folds, and a zillion little cards, a dollar is a conservative estimate. 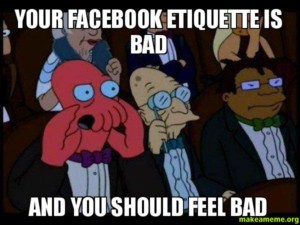 5. Birthday, Holiday, and Other Cards — I’ve been railing against birthday cards (and other wasteful cardboard rectangles) for over a decade now. The card companies keep raising prices, and while there certainly are affordable options, it’s still $1 or $2, plus the stamp, and not only do you have to send an “appropriate” card but you also have to write a personalized message inside. It’s not enough to send a card that says “You’re an awesome uncle!” with a picture of a kitten on it; you have to also hand-write something that says “We miss you and hope to see you next Shrove Tuesday! Happy birthday, Uncle Xavier!” (And thank-you cards are even worse, because you have to find a way to say two full sentences about each and every gift.) So, to get back on track: as much as I hate Facebook birthday greetings, I’m glad they exist, because hopefully they’ll put the greeting card companies out of business. (I personally prefer to send e-mails to people when I want to wish them a happy birthday.)

But not when… …the person is from a generation that ended before 1980. Look, I know it sucks, but your grandmother — even if she uses e-mail — is going to need a birthday card, and a Christmas card, and an anniversary card, and pretty much every other kind of card there is. Otherwise you’ll hear about it. 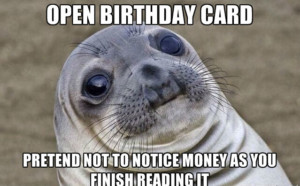 4. Gifts — Gifts are great. I love gifts. In the old days, you had to go and buy a present, and then box it up and put it in the mail. Now, though, the companies will do all the work for you, and the gift is just as thoughtful as if you went to the mall, bought the item, took it home, put it in a box, taped up the box, addressed the box, brought it to the post office, stood in line for an hour, watched all the windows in front of you close up for lunch, and then, finally, mail your package.

But not when… …you’re going to see the person in person. Maybe it’s me, but handing someone a card and saying “the gift is on the way from Amazon” is a little empty. Make sure the gift gets to your house in time to wrap it and bring it to the party. (Or just give the person a gift card. That works too.) 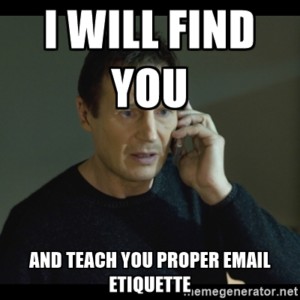 I think I’ve used this one before…

3. Multitasking During Meetings — Let’s change tacks a little and talk about work etiquette. Back in the old days, when you went to a meeting, you concentrated on what was happening right in front of you. You could take notes, or refer to your materials, but that was it. Now, though, given that we’re all expected to do sixteen things at once — and that many of us are scheduled in meetings nonstop all day (leaving us with no time to get any actual work done) — it’s de rigeur to bring your laptop and accomplish something when you aren’t actively participating. I know some people who’d never get any work done if they didn’t work during meetings they were invited to “just in case”.

But not when… …you’re in a one-on-one with your boss or employee, or you’re the one leading the meeting. There’s no excuse for that. Or when you are near someone who doesn’t like this — a friend of mine forbids use of emails or phones during meetings that he runs. 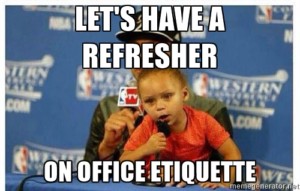 2. Attending Meetings — Why not take an even more general view on the topic? We live in a world where people who work together often live nowhere near each other — sometimes by choice, sometimes because someone has moved. A lot of people also telecommute, which is great, because it cuts down on pollution, time wasted in traffic, and gas and maintenance costs. In the old days, you could only have a conference call, but now, with help from Google, Cisco, Microsoft, or any number of companies, you can easily show all your meeting content in a single location. And on top of that, if you use your computer to dial in, your phone remains free for playing games on when the meeting isn’t really relevant to you — and the sound quality is better over the computer than over the phone anyway.

But not when… …you’re in the office. While it’s certainly possible to telecommute into a meeting from your desk, even if said meeting is happening down the hall, if you’re in the office you will be missed. It’ll be noticed and noted, and it’ll come back to bite you in the ass. Don’t do it. 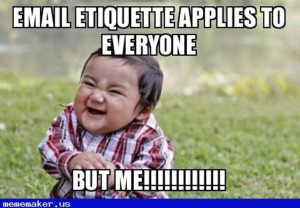 1. Staying in Contact — With the advent of technology, most of us can chat all day with our friends and significant others, to the point that we talk even more than we did back in the day when we actually talked to people on the phone. The voice part, not the data part. If I think of something I want to ask my mom, I’ll e-mail her. My fiancee and I chat all day about what’s going on in our lives. And every now and then one of my friends who I haven’t talked to in weeks will send me a link or tell me something funny — or vice versa. It’s awesome, and it helps keep friendships strong.

But not when… …you have someone who feels a compulsive urge to actually speak to you every day. With voice conversation, you might say something aloud that you probably shouldn’t, and there’s no way out. If you’re chatting or texting, you can always claim you put something in the wrong window — or, even better, you can revise your words so that you don’t get in trouble for saying what you really feel. Plus, if you don’t know what to say, you can always ask a friend and get good input; often it’s okay to not answer right away. 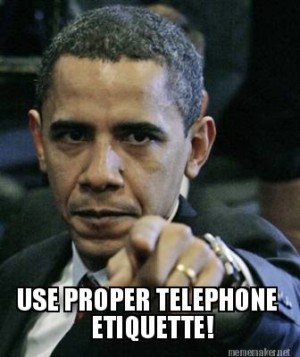 Etiquette books for the 21st century do exist. Unfortunately, “etiquette” is usually set by two generations prior. Etiquette for our current generation is set by our grandparents; my parents will set it for my daughter; I’ll set it for my grandchildren; and so on. And the younger generation will always chafe against etiquette that they consider outdated. It’s just the way of things.

It shouldn’t be a surprise, though; technology and policy adaptation is often way behind the curve. You’ll have a few people and companies adopt early or set trends, but the bulk of humanity will be late adopters, if at all. We’re just too afraid to change, and those of us who do are often forced to dial it back to make other people happy. It’s easier than getting into a huge argument that you’ll never win. 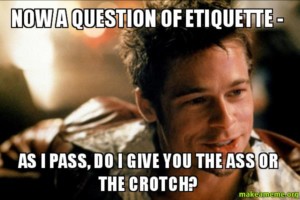 Ah, for the days when you could even do this. Now, everyone has to get up and move no matter how thin you are. Airplane seat pitch is that small.