I’m a huge NFL fan (although it gets harder every day with all the crap going on in and out of the league). My wife wasn’t, at first — still isn’t, as a matter of fact. But after getting her into a fantasy football league, she has developed an appreciation for some aspects of the game.

Other aspects, not so much. Some of the rules just don’t make sense to her, and I recently suggested she start her own football league, the CFL (Celestia Football League, and yes I know the CFL already exists). She’s not quite a football nerd, but I am, and so I’m putting together a column with six of the best changes my wife thinks the NFL should make to their rules, along with her reasoning. 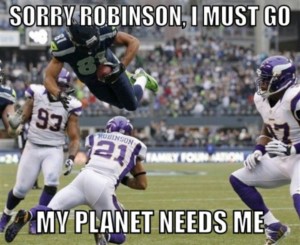 6. Play it where it lies. — This one is directly related to a recent game in which the Colts blocked a Steelers extra point. The NFL rule is that an extra point try (of any type) can be returned by the defense, and if they get into the opponent’s end zone (all the way down the field in the other direction) they get two points. In this case, the Colts defender made it almost to the goal line, but was stopped. Once that happened, the play was over and the Steelers lined up to kick off to the Colts.

Rule change: My wife believes that the Colts should have gotten to start their drive from wherever the player was downed during the blocked extra point.

But why? “They stopped the other team from scoring. Why shouldn’t they get to take advantage of their new field position? That’s what happens if the other team gets a turnover or goes for it on 4th down and is not successful.” 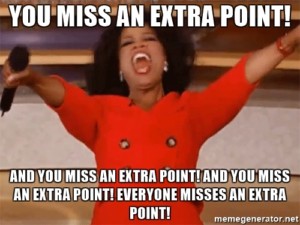 5. Change the overtime rules. — My wife is a big college basketball fan, and in basketball, when there’s an overtime period, you play to the end. Things are a little better than they used to be now that both teams get at least one possession, but still, last weekend the Redskins went three-and-out on the first possession of overtime and then the Saints marched down the field and won the game with a field goal. There were still a few minutes left on the clock, and the Redskins could conceivably have driven the other way and scored a field goal of their own.

Rule change: Games cannot end in a tie, and the entire overtime period is played to the end.

But why? “The better question is ‘why not’? If you put a designated amount of time on something, why would you not play until the end? And there’s never a good reason to end in a tie. I don’t like it in hockey or soccer either, for the record, but we don’t watch those so it isn’t a big issue for me. We watch ALL of the football, though.”

This could all have been avoided…

Rule change: Instead of calling it “offensive pass interference”, which doesn’t really make any sense to my wife, it needs a new name. “Illegal contact” makes sense to me, and it fits in some of the other rules around that particular penalty.

But why? “The offense’s goal is to complete the pass. If they screw that up for themselves, there is a natural consequence of not getting a first down. Why are they also penalized for it with yardage? Now, if it’s a foul of some other type, fine, call that, but a ref getting to decide if a player interfered with his own play is dumb.” 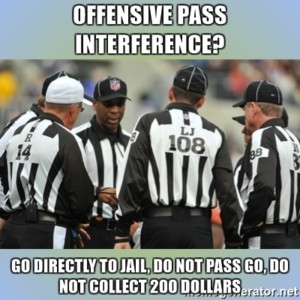 3. Read my lips: no new stadiums paid for by taxes. — This one’s not really an in-game rule per se, but in Atlanta we had two new stadiums open in the past two years. The first, Suntrust Park in Cobb County, will cost the taxpayers $400 million. That’s for an admittedly pretty-nice new stadium (we’ve been there) with no convenient parking, no mass transit access, and no affordable food. And that was to replace a twenty-year-old stadium that was nice enough, but wasn’t attractive to the suburban fans who had to take trains and shuttles or drive all the way into the city to see a game. The second, Mercedes-Benz Stadium in Atlanta, was literally built right next to the Georgia Dome (a perfectly nice stadium, may she rest in peace), will end up costing the city $700 million. At least the new stadium has affordable food and drinks — two people can eat a meal and get drinks for under $20 if they don’t want alcohol. And there’s transit to get there.

Rule change: Stadiums should not be paid for by taxes. I think both of us agree on this one. Sports teams — especially NFL teams — are multi-billion-dollar operations. They can get sponsors or just use their own money. Governments offer tax money as an incentive to get teams to go where they want them, but that’s a terrible policy for everyone except the teams.

But why? “There are plenty of other things my tax money should be going for. Recreational activity for grown men is not one of them, especially since they already get paid a CRAPTON of money.” 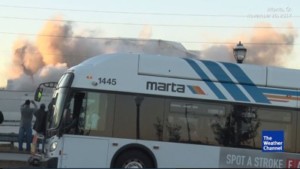 2. Eliminate intentional grounding and fair catches. — The NFL has decreed that they’re going to protect quarterbacks above all other players. We’ve seen tons of plays where a quarterback runs outside the pocket, extends the play, and eventually throws the ball away to avoid taking a hit for a loss. My wife believes that they should be able to throw the ball away from inside the pocket as well without taking a penalty. On the other hand, she feels fair catches are just an excuse for receivers not to take a hit instead of at least trying to advance the ball.

Rule change: The quarterback can throw the ball wherever and however he wants. If the defense is good enough to shut down the QB’s options, then the QB has to make something happen. As for fair catches, either you catch the ball and run with it or you let it bounce and let the kicking team down it.

But why? “If a quarterback is willing to throw the ball away to avoid getting sacked, why should we stop him? His team will receive the natural consequence of no first down. And if his coach is angry enough about him throwing the ball away too often, they will either replace the QB or yell at the offensive line to do better. As for fair catches, a receiver’s purpose is to advance the ball. Fair catches don’t do that. Either catch it and take a knee or run with it. You shouldn’t be able to, in essence, say to the other team, ‘I got this, but you can’t touch me, nannynannybooboo!'” 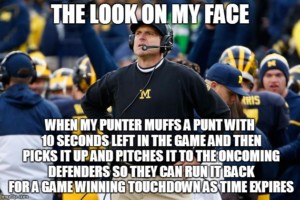 1. Make it clearer as to what is a catch and what is not. — Catch rules, and also ball placement, are kind of ridiculous, and everyone thinks so, not just my wife. If you catch a ball while standing, you have to complete two full steps for it to count as a catch, but if you catch it with your body already on the ground, that somehow counts as a catch as well and you can get up and run as long as you haven’t been touched, but if you’re on the ground and touched when you catch the ball, it counts. When you catch a ball, the placement of the ball doesn’t count for the spot and is instead the placement of the player’s butt — or wherever the down place is (elbow, shoulder, body, knee).

But why? “When scoring, as long as the ball makes it over the magical end zone plane extending in all directions infinitely (dumbest rule wording EVER), the player has scored. It does not matter if his body (other than a hand on the ball) also crosses the magical line (hi, Cam Newton!). When deciding ball placement for downs, however, the ball is down where the butt/knee/elbow/whatever part of the body was deemed down, not where the ball is. This makes no sense. If the player had the good sense to extend his arm with the ball as he was being tackled and did not lose the ball in the process, why would the spot placement not be where the ball is? The point of the game is moving the ball forward, not their butt.” 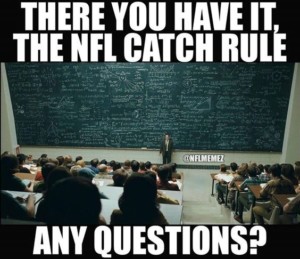 Spot fouls suck. Specifically, defensive pass interference (DPI). No matter where on the field it happens, that’s where the ball is placed. A player could catch a five-yard pass, but if DPI occurs while the ball is in the air on another player who’s 20 yards down the field, then the ball is placed 20 yards down the field. And the whole thing about DPI in the end zone meaning the ball gets placed on the one-yard line is just an unfair punishment for maybe hooking a player’s arm. 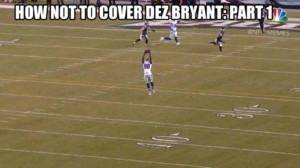 “Throwback uniforms need to stop, especially when the team used to have different colors (I’m looking at you Green Bay). It makes it too confusing to follow the game, and let’s be honest, I don’t need any more reasons to not want the game on. We all know it’s a ploy to sell more merchandise, and really, does the NFL need help selling crap? I think not.” 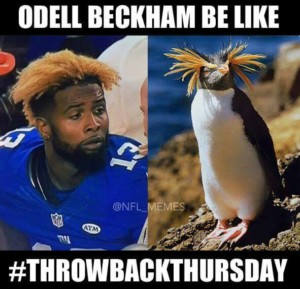 Here’s a list of six blah blah blah. Buy my book. There. Did that get your attention? Good. Okay, so, eleven years ago, a superhero named Alexandra saved the world from the Dark King, and then disappeared without a trace. The only person who knows what happened to her is Andrea Collins — 29, overweight, lonely, depressed, and wanting more than anything else to know why her powers went away. She’ll find out in Josh Roseman’s new novel, After the Apocalypse, which Sabrina Peña Young, author of Libertaria Chronicles, calls “a refreshing approach to the superhero genre, a Bridget Jones Diary meets Supergirl tale that immediately hooks the reader with its painfully honest portrayal of a young superhero years after she has saved the world.” Kindle and paperback versions available.