SIX OF THE BEST… annoying conspiracies no one is talking about

I’m sure all of us have heard about the big ones: chemtrails, the Illuminati, the Freemasons, Roswell, President Obama being foreign-born, global warming, and so on. But if you put all of those aside, you still have a ton of annoying little conspiracies that no one is looking into. Here’s six of the best of them. 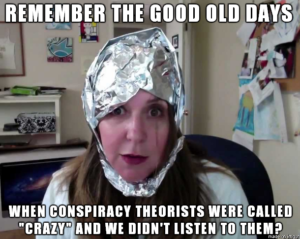 6. The Jet-Dry Conspiracy — Dishes only get clean and dry if you put some sort of rinse-aid in the machine.

The Truth: Technically this is not true, but if you want to get rid of detergent residue you’re pretty much stuck with it. It’s not expensive, and it’s not inconvenient, but, I mean, I bought a brand-new dishwasher and from day-one it didn’t completely dry everything until I put rinse-aid into it.

And on that topic… Okay, fine, rinse-aid helps dishes look cleaner and less spotty. My tupperware looks great now. But the first automated dishwasher made it into homes in 1960. Sixty years later and dishwashers still can’t adequately dry all my dishes? Is it laziness (rinse-aid gets the job done) or is it a conspiracy? What if they put a fan in the dishwasher, like they do with convection ovens? Has anyone tried that? Maybe they should. 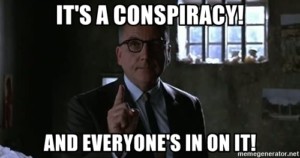 5. The “en.nametests” Conspiracy — You can’t block subdomains on Facebook, only top-level domains. In other words, you can block www.site.com, but not my.site.com.

The Truth: I don’t have an article to prove this, but I know it anecdotally. I’ve blocked nametests.org because I don’t want to see results from all the tests people take at work because they’d rather be on Facebook. Unfortunately, the results all come from en.nametests.org, and Facebook’s block doesn’t cover that. If you want to get around having your site blocked on Facebook, use a subdomain.

And on that topic… There is absolutely no reason for half of the “videos” I see on Facebook to be uploaded as videos. You’re posting a meme picture, but instead of letting me see it nice and clean, you’re showing it to me with a giant play button in the middle of it. I’m 100 percent unlikely to watch any of these “videos”, and 100 percent unlikely to share or like them. Stop doing this shit. 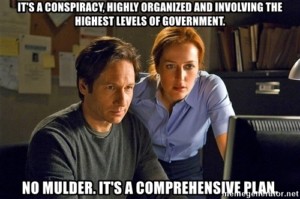 The Truth: This is somewhat accurate. Doctors have said they sometimes don’t trust their own diagnostic abilities, or are afraid of lawsuits, or just because their offices can make more money. That last one, I think, is rarer than others.

And on that topic… I really wanted to bring this up because I’m getting sick and tired (so to speak) of being surprised by lab fees. My doctor says “go to the lab and give us a blood sample”. Okay, fine, so I do that, and I don’t pay any extra on my co-pay. But then, about a month later, I get a bill (usually from Quest Diagnostics) for $50 to $150 that I wasn’t expecting and that I hadn’t budgeted for. I know people who perform lab tests, analyze samples, and report results all need to get paid, but the additional cost needs to be made clear up front. Surprise bills are fun for no one. 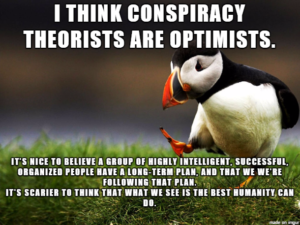 3. The Flu Shot Conspiracy — Flu shots don’t work, or they give you the flu instead of preventing it.

And on that topic… If you want definitive proof of American stupidity (beyond electing you-know-who to the presidency), you need only look at anti-vaxers. One of the primary arguments against vaccines is that they cause autism, which has been scientifically proven not to be true. Anti-vaxers look at one study from one doctor — and that study was debunked years ago. Also, what does it say about people that they’re more afraid of their children being diagnosed with autism than possibly coming down with a life-threatening disease? 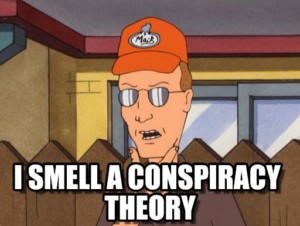 The Truth: Back in Ye Olde Dayes, cars weren’t nearly as efficient as they were before. Now, though, with improvements in engine and oil technology, most cars don’t need oil changes every 3000 miles. I have a car that’s model-year 2017, and the best practice is to change the oil every 7500 miles.

And on that topic… I don’t know much about fixing my own car. It has an electric motor, as well as a gasoline one, and there’s a lot of computerized stuff going on there. I do know how to change a tire, though… except that many new cars (including mine) don’t even come with a spare. There’s a place for it under the floor of my cargo area, but it’s empty. I’d have to spend $175 to buy one, which seems kind of ridiculous for a tire that’s smaller than the normal ones and can’t handle as much wear-and-tear. On the other hand, I have free roadside assistance, including towing, so even if I had a spare why would I bother? I’ll just call for help, have the car towed to a tire shop, and save myself the trouble. 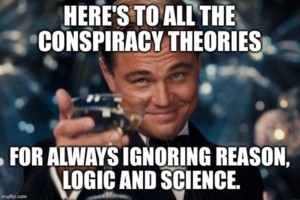 The Truth: It legitimately costs a little more (about $1.50 per day as of 2013) to eat healthier. Why? Because we think it should. That’s really the only reason. The ingredients in, say, “Psst!”, “Kroger”, and “Private Selection” products are often exactly the same, and they’re sold next to each other on the shelf in the same store. But there’s a stigma against buying “Psst!” because it’s considered “cheap”. But rice is rice, garlic is garlic, and canned fruit is canned fruit. Save the money.

And on that topic… Too many people don’t understand how to read a label on a food item. We all think “oh, great, they put the calorie count on the front of my box of cereal”, but we don’t think about reading the other nutritional facts, or the ingredients. How much sodium is there? How much protein? How many preservatives or artificial ingredients? At the very least, you need to be looking at protein, sodium, and location of sugar and sugar substitutes in the ingredients list. Your life will change. And yeah, you may spend a little bit more, but your health will thank you. 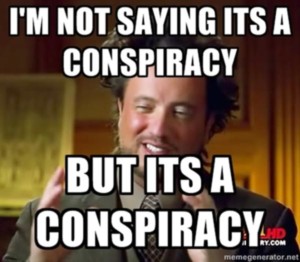 This isn’t really a conspiracy, but more like a weird thing that keeps happening to me.

I drink a lot of water at work. In the morning, I fill up my cup with ice and water. I drink it, and around lunchtime I go to the kitchen, spill out anything left, and get fresh ice and water. In the morning, the water tastes cold and wonderful, but at lunchtime it has this peculiar metallic taste — like, y’know when you drink from an older water fountain or a garden hose and you taste metal? But like thirty times worse. Why does this happen? Is it a conspiracy? Or is it just me? 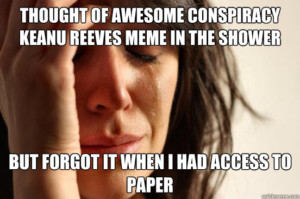