Home/Unsung/SHAUN THE SHEEP MOVIE: if you only see one animated movie this year, make it this one.
­

Aardman Animation’s Shaun the Sheep started out as a supporting character in the Wallace & Gromit short “A Close Shave”. Since then, he’s gotten his own spin-off series of animated shorts under his own name. Shaun lives on a farm with many of his sheep friends, as well as a farmer and his dog Bitzer. Given Shaun’s mischievous nature, it’s never long before the sheep get themselves and the farmer in trouble, which always makes for hilarious effect – especially since the series has no dialogue. It’s all baas and grunts.

Now Shaun and friends have their own movie, and it is pretty much the best animated film of the year by a long shot. 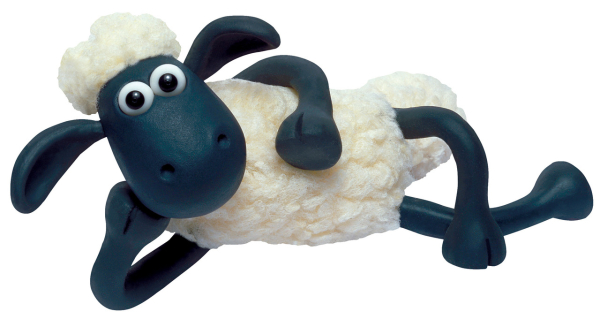 In Shaun the Sheep Movie, Shaun – growing tired of his humdrum life on the farm being counted, sheared, counted and sheared again – hatches a plan to take a day off by putting the farmer to sleep (by making him count sheep, of course) and hiding him in an old trailer. But when the trailer rolls off into the city, Shaun and friends must go find him and bring him home, all while evading animal containment officer Trumper.

All the important characters (aside from the cat) show up – Shirley the giant sheep, Timmy the little sheep, even the naughty pigs! But the addition of mainly human supporting characters to this film doesn’t hurt it either – Shaun and friends in disguise as humans makes for a lot of laughs when they try to copy the humans, especially when dining at a fancy restaurant. 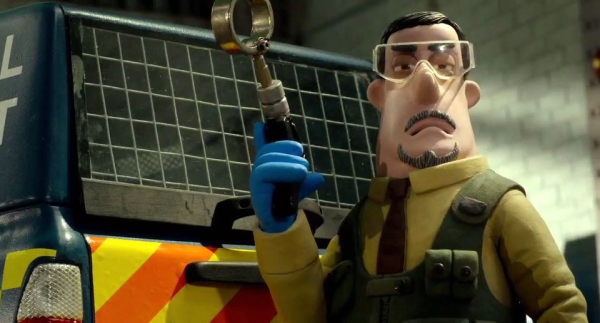 The very nasty Officer Trumper, voiced (if you can call it that) by Omid Djalili.

In keeping with the original series, be sure to keep an eye out for many, many little references to other films – most obviously (and credited in the credits) Silence of the Lambs, but there’s also little digs at Ferris Bueller’s Day Off, Terminator, Pitch Perfect, Taxi Driver, and even Aardman’s own Wallace & Gromit. (Look for them on a newspaper!)

The movie doesn’t just feel like one long Shaun short (though I would have been more than okay with that). There’s a little backstory, a couple of dramatic moments (which are still funny, though) and some twists you might not expect from Shaun. There’s even a catchy soundtrack with songs from Primal Scream, the Foo Fighters, and even a remix of the original Shaun theme song featuring rapper Rizzle Kicks. The original series’ humor is still intact, though – a lot of slapstick and situational gags, plus the occasional fart/poop joke. (Wouldn’t be Shaun without it.) 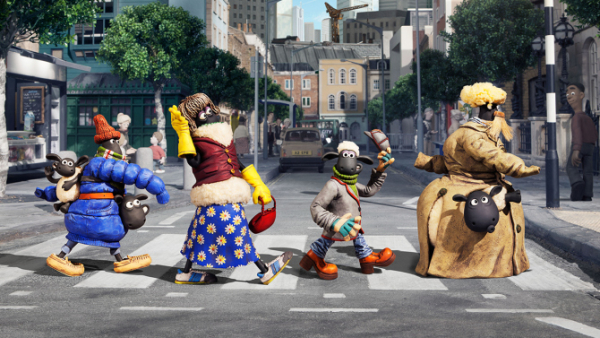 Why did the sheep cross the road?…

Even with recent animated movies like Inside Out, this is easily my favorite animated film of the year just because it’s so SIMPLE. It’s not heavy or emotional or super high concept. It’s just sheep in a city trying to get their farmer back home, and it’s warm, good-hearted, and hilarious.

Shaun the Sheep Movie is currently playing in theaters everywhere (and it has nothing offensive aside from the fart/poop jokes, so you can feel free to bring the whole family). If you want to check out the animated series, it’s on Amazon Prime (and a lot of people post the episodes on YouTube) and on DVD. I guarantee you won’t be able to stop singing the theme song after you’ve heard it as many times as I have. 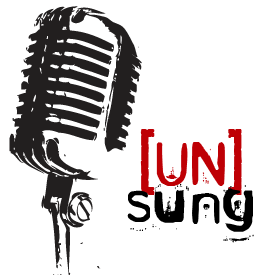