What would YOU do if you found out you could stop time whenever you had an orgasm?

(That’s one way to start an article.)

Suzie and Jon know. Suzie works at a library. Jon is an actor who works at a bank. Suzie’s library is in trouble. Suzie and Jon hook up. And they decide to rob the bank where Jon works in order to save Suzie’s library. Simple, right? Not so simple. Turns out that they’re not the only ones who can freeze time. And they’ve got the Sex Police after them. Among many, many other things.

Welcome to Sex Criminals. Written by comic book superstar Matt Fraction and illustrated by Chip Zdarsky, it’s a surprisingly good combination of sex comedy, crime comedy, coming-of-age story, and superhero origin story. And there’s a little bit of romance in there too.

Much, much less pleasant than it sounds.

Despite all the sex, this is not a comic meant for people to be titillated by. This is a comic to laugh at and maybe even relate to. Sex can be really awkward and really awesome (apparently!) and Suzie and Jon illustrate that perfectly. Suzie is used to disappointing sex from the other people she’s been with, so the moment she realizes that she’s actually had a good time with Jon is surprisingly calm…and then they both realize they’ve both stopped time and all hell breaks loose. And the first issue alone is all about how Suzie has to give herself a sex education all by herself, learning made-up positions such as the Chocolate McKitten and the Queeps and the Swaffle and the Dutch Microwave and the fan-favorite Brimp. (The fandom call themselves Brimpers. Look it up, it’s hilarious.)

This comic is just really, really, really funny. Extremely so. This may be one of the best sex-related comedies to never make it to the big screen (though Fraction has been in talks to make it a TV show!). There’s a sex shop where Suzie and Jon go to test out their, ahem, quirks. Jon’s dick glows when time stops (and Suzie makes fun of it). There’s a made-up porn parody of a Coen Brothers film called “Hard-on Fink”. There’s a hilarious background gag where there are posters for a teen heartthrob singer named Sexual Gary. All kinds of little things that are pretty damn guaranteed to make you laugh. 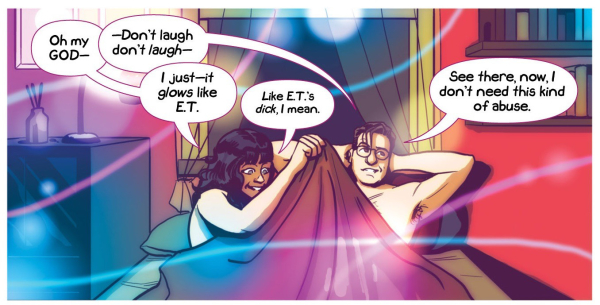 On the technical side, the art looks like something straight out of a TV cartoon. About sex. Chip Zdarsky is amazing at illustrating Matt Fraction’s incredibly weird story, full of colors and fourth-wall-breaking narration. Especially when one of them stops time. When they enter what Suzie calls “The Quiet” and Jon calls “Cumworld” (of course), the colors pop and everything glows. The Sex Police themselves glow in The Quiet.

The creators themselves have a wonderful sense of humor. There’s one scene where Suzie gets drunk and sings “Fat Bottomed Girls” by Queen, but they couldn’t get the rights to the song, so Matt Fraction covers up her speech bubbles with captions telling the readers that sorry, they couldn’t use “Fat Bottomed Girls”. Matt and Chip put “sex tips” in every issue that you can use in your own sex life, such as: “Ladies, is your man “ready” to “go”? Grab it hard and sing all of “Blue Christmas” into it. That’ll chill him the fuck out.” Not wrong.

I mean, they’re not WRONG.

Sex Criminals is available in trade paperbacks collecting five issues per book and a hardcover collection called Big Hard Sex Criminals (har har har) that has all of the first ten issues. And there’s even a special book of tips called Just the Tips. Get some!