People who play tabletop RPGs and wargames have always had an… interesting relationship with novels, anthologies, and short stories based on the properties that they play. On one hand, you have companies like Wizards of the Coast, who could shit in a box and label it “Forgotten Realms” (and I would contend that they often do) and it would sell very well. The Black Library imprint of Games Workshop is exceptionally popular as well. This is to say nothing of the way that World of Darkness and Shadowrun books sold back in the days of yore.

On the other hand, gamers tend to deride and mock gaming-inspired fiction a lot. I often hear that it’s something that “real” authors don’t do, or at least that real authors don’t put much effort into (ie, they’re throwing some lame stuff together for a paycheck). Gaming fiction is also often derided as being sub-par, poorly-written, or (mostly) doesn’t follow the rules/setting of the game closely enough. If fantasy and sci-fi writing in general is considered the fiction ghetto, then gaming fiction is often consigned to the worst part of it by the very same people it’s supposed to appeal to.

I’m not one of those people who hates gaming fiction. Admittedly, I think that a lot of it is kind of poorly written for one reason or another and I think some of the more popular gaming series out there are rather overrated at best. But that doesn’t stop me from enjoying more than a few books based on tabletop gaming properties. Some of the most entertaining books I’ve ever read have been based on RPGs or wargames, as a matter of fact. Maybe not high literature, sure, but in the end I often read for fun, not as an academic exercise.

In the last year, I’ve gotten no less than 4 different short story anthologies based on tabletop RPGs. Three of them have been by way of kickstarter, while the fourth I bought separately. The first one I’m going to talk about is Have Blaster, Will Travel edited by J.R. Blackwell and set in the Bulldogs! Sci-Fi That Kicks Ass! tabletop setting. For those of you unfamiliar with it, Bulldogs! is a setting that is best described as resembling all the gritty, blue-collar and criminal elements of Star Wars. No Jedi, no intergalactic politics, no philosophy, just people scraping by on a beat up old transport, often dipping into the wrong side of the law. Firefly is another pretty good comparison.

Have Blaster, Will Travel is a 216 page softcover short story anthology containing 11 different stories and a preview for another. None of the authors, with the possible exception of Mur Lafferty, are ones you’re likely to recognise from your local bookstore. You are considerably more likely to recognise some of them from your local tabletop gaming store, however. Some big, respected, and/or popular game designers have contributed stories to the collection. 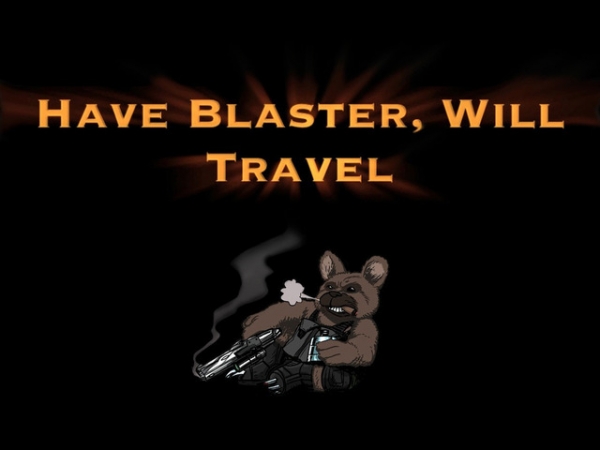 Despite a couple of soft spots, I absolutely recommend the book if you like sci-fi that’s fun and down to earth (in a manner of speaking). The stories range from the relatively serious (Motherlode) to the really funny (Being Green) to the action-packed (By Gods Damned And Bounty Blessed) to the tense and creepy (A Fist Full of Urseminites) and others that are just classic sci-fi. If I had to pick a favorite story, it’d probably be a tie between Being Green and By Gods Damned And Bounty Blessed. I want to make a character based off the priest in the latter story and that’s high praise from a gamer.

The main problem is that it’s sometimes difficult to understand unless you’re familiar with the setting. There will be references to places, organizations, and species that aren’t really explained. The better stories don’t assume that knowledge and devote some effort to keeping people informed, but not all of them do. In fact, what I felt was the worst story in the collection (Dinner At The Spacesick Restaurant) is absolutely bogged down in unexplained babble and references that would even put Star Trek to shame and loses even a fan of the setting like me.

While I do understand that they can’t really explain everything in the space allowed, some of the stories just throw things at you without even trying. Which is a shame, because otherwise this anthology would be an excellent gateway into the game itself.

I really really want to recommend this book to everybody as there are some great stories within and I enjoyed reading through it. As it stands though, it’s a difficult thing to do unless you have a high tolerance for references and information that are given no explanation or context. On the other hand, if this anthology inspires you to pick up the RPG, I’m all for it because Bulldogs! really is a kick ass sci-fi game that more people should be reading and playing. If you’re already a fan of Bulldogs! I absolutely recommend getting this one.