Art By: Shannon Ritchie
Story By: Kenton Daniels
Cover Art By: Asya Yordanova
Letters By: Jaymes Reed
Logo Art By: Michael Sumislaski
Release By: AlternaComics
Where to find this book: Comixology (for digital download)
Amazon or through Diamond Distributors (for hard copy)
www.alternacomics.com (for more information) 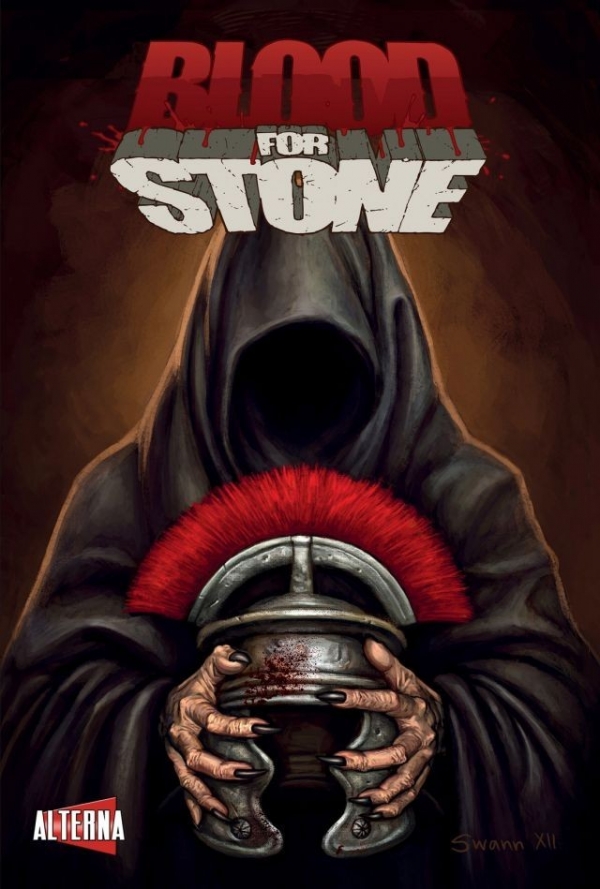 I’ve always thought that stories concerning Greek & Roman soldiers of old were tough fare to tackle.  Truth be told, aside from Miller’s “300”, there really weren’t any books out there that would have the (can’t believe I’m saying this) stones to tackle the subject. I’m so glad I was wrong.

“Blood For Stone” takes us on a journey through the Alps in 126 A.D. with five Roman Centurions.  Yes, it is your standard five man structure of the leader (Centurion Titus Crispin), his second-in-command (Durio), the spearman (Otho), the brute (Dio) and the bowman (Getha) but, though this set-up normally feels a bit cliché, there’s never that sense of “been there/done that”.  The characters somehow feel fresh and new thanks to the art and the tone of their dialog.

Let’s start with the art, shall we?

Shannon Ritchie’s art is A Double + good.  The nuance and minutia is so clear and complicated on every single page down to the scars and bone fragments.  There were times I had to, no, I was compelled to go back and look at a page again and just drink it in.

The art looks as though it was lovingly carved from wood and pressed upon the page in the blackest of inks.  It felt just that raw.  That being said, I think that it would have been a benefit to add some sort of grayscale to the piece just to allow some things to pop more than others.  But if that’s my only complaint then, trust me, there’s little to find in the way of shortcomings here.

Before I jump in on the story itself I want to take a moment to throw praise to the story’s letterer, Jaymes Reed.  Lettering is something that doesn’t get enough attention or love.  Letterers are the master chess players in comics and Reed feels like Bobby Fucking Fisher here.

The goal of any good letterer is to get the words on the page and not fuck up the art.  Reed goes beyond that and somehow gets the words to seamlessly work into the page without once causing us to wonder what’s behind the balloons and captions.  Now, let’s get to those words.

I’ll get to the story in just a minute, but I want to delve into the story with respect to the dialog.  It can be easy when you’re writing a very “proper” character to sound like you’re either preaching or just pompous as all hell.  Kenton Daniels never once drifts into this territory.  Instead the characters seem like they’re part of some Greek tragedy or epic poem of yore all with very distinct and well crafted voices.

The story itself is as well crafted as the characters themselves.  It seems like a fairly straightforward rescue mission to start but it throws you more than a few curveballs along the way. Our five Romans, along with a slave woman named Velka, are off to save a kidnapped girl named Adelina from a brigand.  What could be simpler than that?  Then they get to the cave and it all starts a nasty slide down into a completely different tale altogether.

Before all is said and done there will be blood and by the buckets.  The story keeps you guessing but always keeps you entertained.

In short: Why don’t you own this already?