Rebel Without A d20

Rebel Without A d20

Jim was a mixed-up kid from a mixed-up home, where his dad wore an apron and his mom wore the pants. Except she wore skirts; but you know what I mean.

The first time I saw him, he was obsessing over a cymbal-banging monkey. He’d been picked up by the cops for carrying some Magic: The Gathering cards in a Monopoly neighbourhood. I was at the police station because I’d been busted for Warcraft, while Judy had run away from home to get away from her father who’s refused to pay her $200 when she passed go. Parents, they can be cruel.

Me? My name’s Plato. I wasn’t named after the philosopher, but after Play-Doh. Unfortunately my parents were illiterate.

“You’re tearing me apart!” I heard Jim yell out when his parents came to get him. They were full of sympathy, encouraging him to avoid the wrong type of crowds and maybe give pictionary a chance. He didn’t seem to want anything to do with it. Jim wandered off with a cop who seemed like he kind-of understood.

The next day was Jim’s first at school. He got off to a bad start by stepping on the school seal, a guy dressed up with flippers who was the mascot for the Debate club. The tough guys of the school, Buzz, Woody, Hopper and the gang, they instantly gave him trouble about it.

Things got worse when we went to the Planetarium that afternoon. It’s a happening place, and I liked how they showed the world ending on a regular basis. It reminded me of some of the hairier times I’d spent in Azeroth, and the bad old days before they were MMORPGs. Once the world had ended, I saw that Buzz and his crew had started giving Jim and me the evil eye.

We headed out to the parking lot, but the bullies were waiting for us. Judy was with them. They’d mocked me years ago for buying Final Fantasy gamebooks, while they all read Lone Wolf. Judy had never given me trouble though, and I knew that she had her own problems ever since I saw her carrying a Choose Your Own Adventure. I knew Jim and I were in for trouble though. 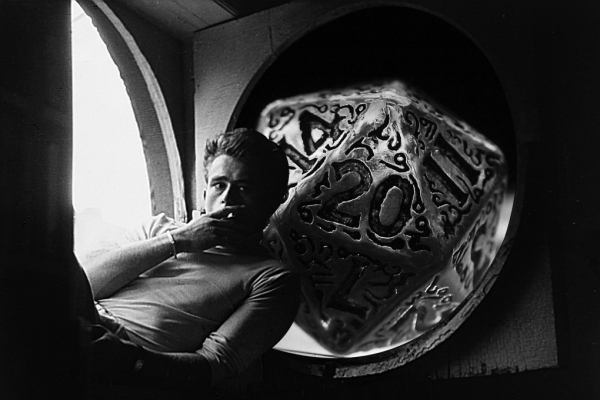 “You’re one of those card-guys, ain’t ya?” Buzz asked Jim in his mocking tone. “Vampire: The Eternal Struggle, is that your bag? Huh, daddio?”

“It’s come a long way…” Jim replied, playing it cool. “Rage was good too. I like Magic though.”

Buzz grinned. “Magic, huh? You gonna use trample on us?”

Before I knew it, Buzz had piled on to Jim and pulled Jim’s deck out from his pocket. He quickly opened it and poured the cards onto the floor. “You should play a real game. A dice game.”

“I thought only punks played with dice,” Jim said.

Buzz pulled something out of his jacket and waved it about menacingly. It was a four-sided dice. A shudder went through me as he tossed it to Jim. Jim caught it and felt the weight of it.

“This is dangerous,” he said. “Someone could get hurt…”

“Nah,” Buzz said. “This is just how we roll. It’s just a game, man… but without a Dungeon Master. We don’t need even need no Monster Manual sometimes. Just a handful of d’s and some imagination…”

“Not Dese, d’s! Dice, man!” Buzz scoffed. “That’s what all the cool kids are playing with right now. I tell you what, why don’t you meet us tonight at Wizard Point. It’s up on the Coast. Unless you’re chicken, that is.”

“We’ll see when you get there,” Buzz said. With that, he and his crew left, leaving Jim and I to ponder what the future brought. We had no idea it would be so bad.

We got to Wizard on the Coast at a little after 9. I knew it was a late start for any kind of game to start, but some kids just won’t listen. I warned Jim about how they chewed up novice gamers and spit them out, but he wouldn’t listen. He wouldn’t listen to me talking about that movie with Tom Hanks, or how creating a new character could take hours. I tried getting him into Warcraft, or even Elder Scrolls: Oblivion, but he had his mind set already.

Nobody was going to call him chicken.

“So we’re playing AD&D?” he asked Buzz as we approached the board that had been set up. I saw that some of Buzz’s crew had brought beer and pizza and feared that it would be a long – and dangerous – night.

“Whatta you, some kind of joker?” Buzz asked with a sneer. “It’s called D&D. They dropped the A years back, and replaced the old system with the AD&D one to make it clearer. But nobody calls it that anymore.”

Buzz smirked. “Do you know the rules?”

“You’d better be,” Judy said, as she stepped out from behind Buzz. I don’t know what she was doing there. She tossed three books down on the ground, turned around and ran away as if she expected people to follow her. Man, she was crazy.

Jim scooped up the books and flicked through them. “What else do I need?”

Buzz threw a small leather pouch at him. He opened it up and removed several dice. The more sides they had, the worse my feelings grew. Jim leaned down and covered his hands with dirt before rolling the dice on the board for practice. “D’s, huh? They’d sure make for a crazy game of craps.”

“I like you,” Buzz said. “I mean, not like-like, but you’re alright. You’re lacking some XP, but we’ll get you up and running before you know it.”

All through the night he flicked through the manuals and rolled. He grabbed any scrap of paper he could find, working out formulas and tables, the d’s taking on a life of their own. By the end of the night he’d created his character, a Human Cleric called Gygax. Everyone laughed at that.

They didn’t laugh when the game started.

The first thing he suggested was that his character play Magic: The Gathering.