When I was but a wee Blitzy, I had a Cabbage Patch Kid. She was blonde, and soft, and hand-stitched. I thought she would look better with rosy cheeks and red lips, so I took to Mama Blitz’s makeup case and painted my tiny Cabbage Baby up like a lady of the night. Mama Blitz was none-to-please and I learned, later on, that fucking doll would be worth a few hundred dollars these days. Dammit anyway. 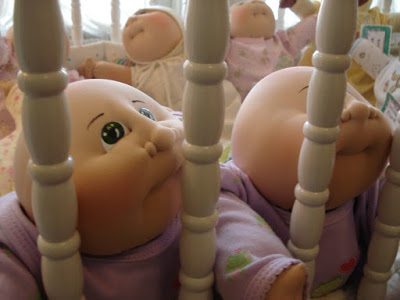 The popularity of Cabbage Patch Kids has always kinda ebbed and flowed – their cute little faces turning from soft cloth to hard plastic and their marketing swaying between babies for girls to buddies for boys. Hell, I remember when Babyland General started popping out babies for bath time; because that’s not creepy.

I never had another Cabbage Patch doll after the first one that I thoroughly ruined and turned into a picassoesque working gal. I did however experience the birth of some Cabbage Patch Kids at Babyland General when I lived in Georgia. Explaining the process of the gyrating cabbages is a bit weird – because it’s a fucking cabbage giving birth. So, here’s a little video for you instead. You can thank me later…

I can honestly say, touring Babyland General was a bit creepy: walking through nurseries and maternity wards, talking in whispers, and tiptoeing past the cabbage patch – hoping and praying you didn’t cause the expectant veggies to go into labor. Oy.

Now, having all of that information is it any wonder that someone finally made a movie about the secrets behind these veg-born babies of cabbage? I don’t think so. It’s pure nightmare fuel without the bleak imagery and singing provided within Patch Town. 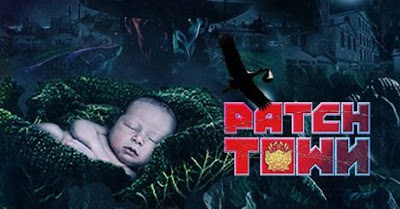 Okay, fine, Patch Town isn’t really about Cabbage Patch Kids but because Cabbage Patch borrows from cabbage-lore (it’s a thing), I can make the leap from one to the other.

Patch Town is a full length horror-musical (although, less musical than you would expect) based on an award winning short film of the same name. It tells the tale of Jon, a factory line working, who spends his days prying babies from cabbages to turn into dolls. (Yeah.) Falling deeper into a depression, because who wouldn’t while shucking cabbage babies, Jon learns that he was once a doll; loved and happy. When the evil baby catcher learns that Jon and his wife have stolen a cabbage baby from the factory floor, Jon is determined to find a safe home for his wife and cabbage… errr… child.

They move to the big city – a world apart from Patch Town – where Jon must learn the ins and outs of the human way of life. As the family begins to find their happiness, the evil child catcher tracks them down and kidnaps Jon’s mother (mother here being the woman, then a child, that adopted him as a doll). Jon has to decide whether to save his mother, save his family, or once and for all save everyone in Patch Town. 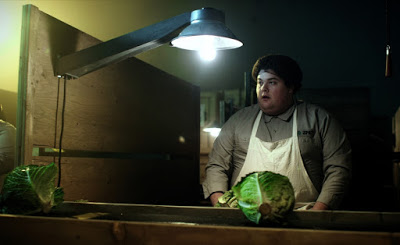 That’s a whole lot to process, yeah? However, it’s kind of a bit o’fun. There are so many off ramps to weird that I couldn’t help but be delighted, in a very child-like way, about everything happening within Patch Town. But, that’s because I’m an adult. Mostly.

If this were a movie made for adults… Oh wait.

Patch Town manages to fall squarely in the middle of creepy and child-like, which is pretty much where I like to live. I’ll be watching this one again. And, although it did make me wonder what Mama Blitz ever did with my poor painted girl Cabbage Patch doll – it did not make me want to buy another one. It did however reinforce my belief that children should be eaten. Especially if they’re actually cabbages.

Zombie Honey Rating: 3 Odes to Cabbage out of 5