Home/Nerdery Publications/NERDIST PRESENTS THE HIVE: for a movie about remembering you won’t feel bad about forgetting it.
­ 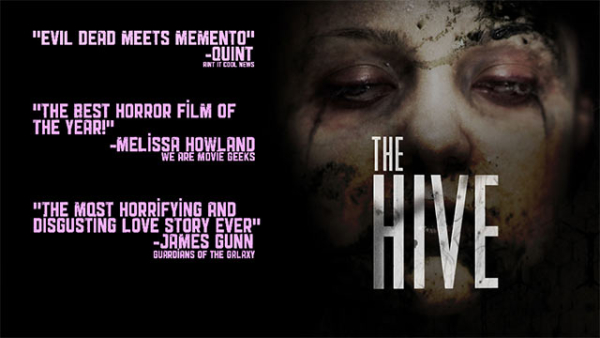 Spoilers for Nerdist Presents The Hive abound within. Also spoiler alert: I didn’t like it.

Let me preface this by saying: I am a HUGE fan of Nerdist. I love their podcasts. I love their web shows. They have good nerd news coverage. I just think they need to maybe pick a better film to proudly present for their next Nerdist Presents…film.

Nerdist’s first production is a horror film called The Hive, co-written and directed by music video director David Yarovesky. It’s been called “the most horrifying and disgusting love story ever” by none other than James Gunn (whose brother Sean appears in the film). I have seen it as of the other day, and I can safely say that it is neither this, nor “ridiculously fun” as Nerdist’s own Chris Hardwick calls it.
The Hive begins as a seemingly random guy covered in skin sores and black goo wakes up in a cabin with no memories. The plot unfolds through flashbacks, Memento-style, as the guy – who soon finds out his name is Adam – uses clues left around the cabin to piece together the things he’s forgotten. Only trouble is, the things he remembers aren’t always his own memories. 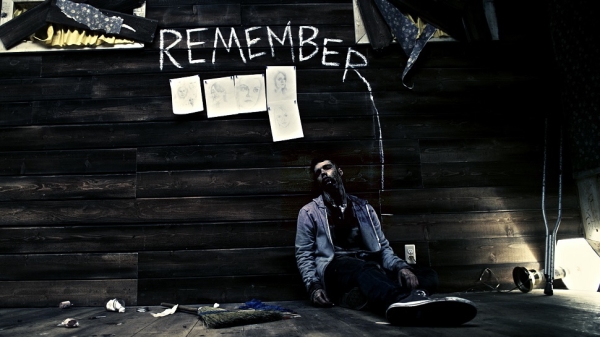 I’d rather not, thanks.

Sounds cool, until you realize the flashbacks are a super contrived zombie apocalypse story. The first half hour of the film consists of womanizer Adam – counselor at a summer camp (surprise surprise!) – falling, both literally and figuratively, for Katie, one of the female counselors. Things don’t even get INTERESTING until the two witness a plane crash on a hill near the camp, which they go to check out with two of their extremely forgettable friends. And then, as you can guess, all hell breaks loose in the form of a virus that was in a suitcase on the plane.
Here’s the one part I DID enjoy about the story: this particular zombifying virus (which we find out the history of through completely unnecessary flashbacks from the memories of two scientists) not only makes you throw up black stuff and look kinda gross but still kinda hot because you’re a sexy teen at summer camp, but it connects you to everyone ELSE infected with the virus. Everyone infected becomes a single hive-mind, completely coherent and able to speak, Evil Dead-style. Which is why Adam, who we discover was infected at one point, is able to experience the memories of people that aren’t him.
Aside from that, this movie is pretty much a dumpster fire. First off, it all takes place while Adam is locked in the same cabin remembering things. Some movies that all take place in one location work fine…but not this one. If you’re going to have a zombie hive mind virus, put it in a really populated area instead of four kids in a cabin! That’s WAY scarier. Secondly, instead of focusing on the virus like any good zombie apocalypse movie should, The Hive makes the super annoying decision to focus on the “romance” between Adam and Katie (which, first of all, happens after ONE FUCKING DAY, half of which Katie spends hating Adam). The actual exposition of the virus could have been handled a lot more smoothly, rather than having ninety percent of it being done through NARRATION. Ugh. This movie felt like it was either talking at me or shoving romance in my face.
When I first saw the trailer for The Hive, I got the feeling that the movie didn’t know what it wanted to be, and those expectations were proved right by the film itself. It starts out for too long making you think it’s going to be a romance story, but when the hive zombies start happening, you get a little excited and hope to all hell that it throws the romance out the window. Nope. The tone is all over the place. It wants to be horror, but also drama, but also romance, but also a little bit of comedy (there’s an unfunny part where Adam remembers having sex with Katie from Katie’s perspective, then shouts “I JUST FELT MY OWN DICK IN ME!”), and it kind of falls flat on all fronts. This scattered tone is proved just by looking at the soundtrack – whoever’s idea it was to have dance-pop producer Steve Aoki not only provide songs from his album (which includes titles like “Born 2 Get Wild”) but also executive produce a film that wants to be SCARY and SERIOUS should be fired. So hard. 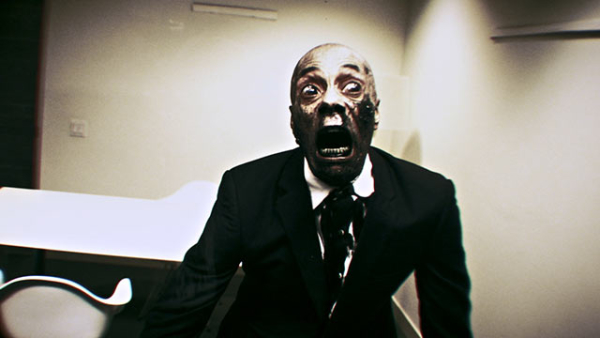 There’s just a random slow motion shot of this guy dancing. Why is there that shot. This guy isn’t even relevant to the plot in any way whatsoever.

The two good things this movie does are the interesting zombie virus concept and the cinematography once the virus starts to take hold (this is a very good-looking movie, I’ll say that for it). The script made ME want to start throwing up black goo, and the acting didn’t help (amnesiacs do NOT, I repeat, do NOT just start shouting “WHO AM I?!” when they wake up!). And the ending was both really mean to Katie and a massive eye roll (spoiler alert: the virus causes the downfall of society, but Adam doesn’t tell Katie that because he wants her to still have hope).
Nerdist, I love you, but pick better films. Preferably my own films. Hint, hint. And Yarovesky, maybe stick to music videos. 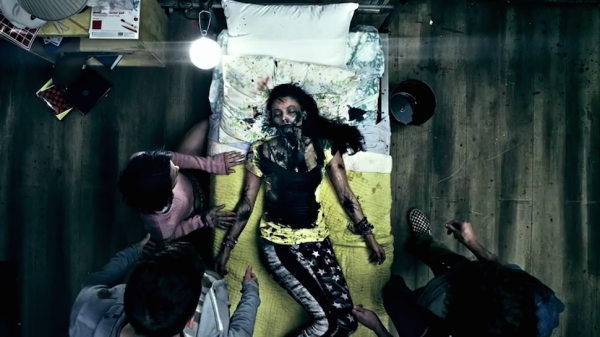 Once you go black goo you never go back goo.

Rating: 3 zombified-but-still-sexy teens out of 10
The Hive is available on VOD if for some reason you’re still curious and would like to rent it. I wouldn’t recommend it.