RICK: It’s not like it’s the first time. In the last couple of years she’s had flings with Batman, Superman and others. She’s been pretty active!

SAM: Wonder Woman and Superman together is a giant step backwards for the characters, WW in particular.

JESSICA: To see the relationship as diminishing her status is too short-sighted. Why is she Superman’s squeeze? Why isn’t Superman her boy-toy? 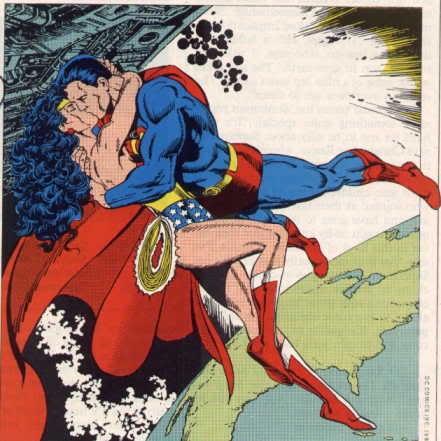 RICK: Good point, like in New Frontier or Kingdom Come, where she dominates him instead.

RICK: Isn’t that a bit demeaning to Lois Lane? She’s got a lot of fire, and isn’t exactly Daphne Blake in terms of the damsel-in-distress routine.

JESSICA: I love Lois, but let’s face it. DC has to get in on that Twilight style sex that destroys bedrooms somehow. Creativity and a willingness to explore that which hasn’t been done before is the very foundation of pushing boundaries. If readers know that writers will never go somewhere than the excitement of what’s to come is completely gone.

RICK: True, but Alan Moore always points out that just to push boundaries for the sake of turning heads isn’t exactly deep and meaningful. I worship the Bearded One, and I’m not going to argue with him!

JESSICA: Have you read Fashion Beast? Gotta remember to add it to my pull list…

RICK: Sure, it makes sense for her to be a romantic interest for Superman, but it’s just not what I want to see. It doesn’t diminish her as a character in any way, but if you want to make her “real” then you have to show her with emotions and how she relates to others, not have her knock boots with the Mister Rogers of comics. I get that the NEW 52 series is a huge reboot but I just don’t the relationship lasting just because they’re going to get back to Lois and Clark as a couple at some point. Every few years they try to shake things up and get attention, like when they changed her costume. It didn’t stick, and I think it’s only a matter of time before this storyline gets ditched.

SAM: Wonder Woman was introduced into relationships within a pseudo relationship with Steve Trevor. That was always doomed to fail though. 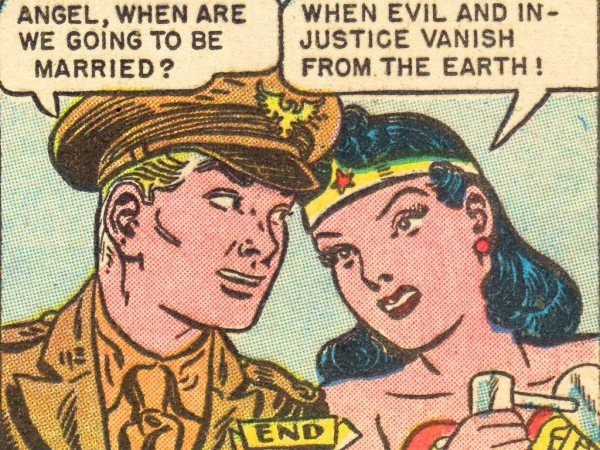 SAM: It taught Wonder Woman that relationships aren’t necessary. That they are nice, but they don’t prevent anyone from being a great person. Within literature, WW is supposed to be the strong, bold, and independent female. She is the one constantly turning heads because she refuses to bow down to our society’s depiction of females. Society has always then attempted to shackle her (sometimes literally), this is another attempt at shackeling Wonder Woman. The only “story telling process” I get out of this is two things 1. Trying to make their premier super hero more relatable (because apparently a super hero girlfriend does that) and 2. Shackle Wonder Woman to the male ideology of how women should be depicted in media. Don’t get me wrong, I’m a straight male who enjoys some fan service every now and then…

RICK: Fan service? Is the crap hitting that again?!

JESSICA: So let me rephrase this, “Wondy can’t be with Mr. Perfect, because then she’s ruined to be with me!” Heaven forbid she wants to get some with a guy that can keep up with her. Since when was this about her being weak and NEEDING a man? She probably just wants to get some and not worry about breaking the poor guy.

RICK: Is this an issue about feminism or good storytelling? I suppose in her case, it’s both.

PROMPT 4
What do you think is the ideal venue for Wonder Woman to break out and make a bigger impact?  Is it time for a film?  A TV series?  Solo, or as part of the Justice League?