I want to write elegantly about Mad Max: Fury Road. I WANT to. But instead I just keep thinking about it and flailing around like a war boy headed for Valhalla – less the shiny, chrome facial paint, of course.

When I heard about Mad Max: Fury Road, I was skeptical. When I heard that George Miller was doing it, I was less skeptical. When I saw the first trailer and heard the first drum beat, I was fucking sold. I didn’t care if the movie was going to be the 3 minute trailer on a loop, I was going to throw my money at this godsdamned movie as quickly as I could dig it out of my couch. It never even occurred to me that it could be disappointing.

Because it couldn’t be.

And it fucking wasn’t. 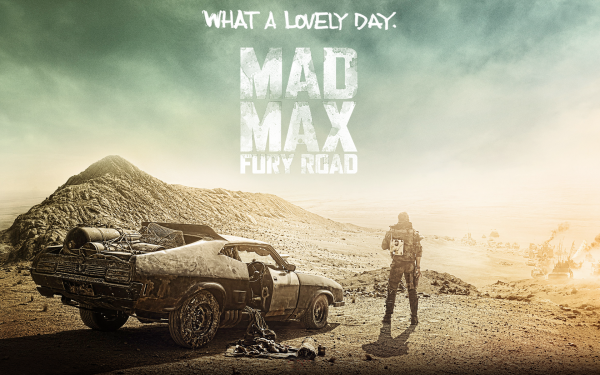 My movie going experiences are always hit or miss. Mostly because of my desire to burn people alive who annoy me, or who just happen to be in the vicinity. I had high-hopes for a good audience at the “midnight” (actually 10pm, because anything after that brings the devil, apparently) show. Right as the movie started there was only one douche-nozzle that wouldn’t shut his mouth, but with the onset of non-stop action on a grand scale, and a very angry-eyed @0ne2w0 telling them to shut the fuck up, the rest of the movie was, more than enjoyed, in silence. Or as silent as you can get during a Mad Max movie.

I’m not going to give you a plot summary, you can watch the trailers for that. I’m not going to give you spoilers, because why the fuck would I? Instead I’m going to tell you this: Tom Hardy – as Max – is fucking brilliant. He brought all of the ticks and dysfunction from the original portrayal of Max Rockatansky to this version of him, plus a certain believability that was never exactly there with Mel Gibson. And, Hardy’s ability to say more with a grunt or a look is impressive, to say the least. Charlize Theron is fucking bad ass, tortured, beautiful, and did I say fucking bad ass? Furiosa was aptly named. Her strength, determination, and ability is hardly matched by anyone – because a woman with conviction is a terrifying thing. 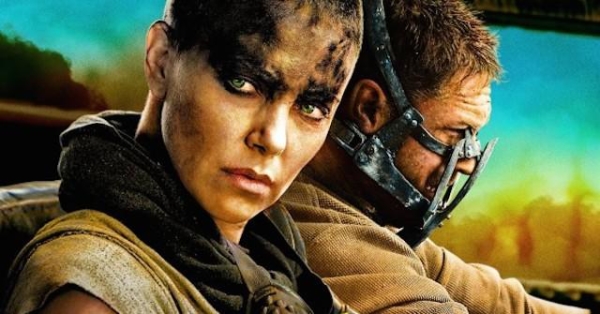 When are people going to stop pissing women off. Most of us will cut you.

Can we all just take a minute to bow down to George Miller? To appreciate that this man brought more than just his A-game to the table. He invented a new fucking game. From the moment the movie starts you are left with little breathing room. One intensely, action-filled scene after the next keeps the movie moving, literally. Miller OWNS us during this movie… from the practical effects and stunts, to the custom designed vehicles, to the mounted drummers and flame-throwing guitar players, you can’t look away. You can’t not pay attention. Your ears are filled with the cacophony of percussion, engines, guns, and ass-beatings. Your eye holes are replaced by dust storms, painted war boys, explosions, and high-flying men. Your mouth, let’s face it, your mouth is fucking chapped because just looking at the scenery makes you thirsty – and every time you see a chapped lip, you lick yours, praying the Gods that your dehydration is just in your imagination.

A friend of mine, @JaredOldham said that: “George Miller watched the Fast and Furious movies and said, ‘awww, that’s cute…’ then set them on fire with a flame-throwing guitar.”

Another tweet I read said: “Fury Road makes me retroactively angry at the last decade of action movies.”

I wish I could sum it up better than either of these statements, but I cannot. Because both are accurate and beautiful succinct. And if there is one thing I am not, it is succinct. 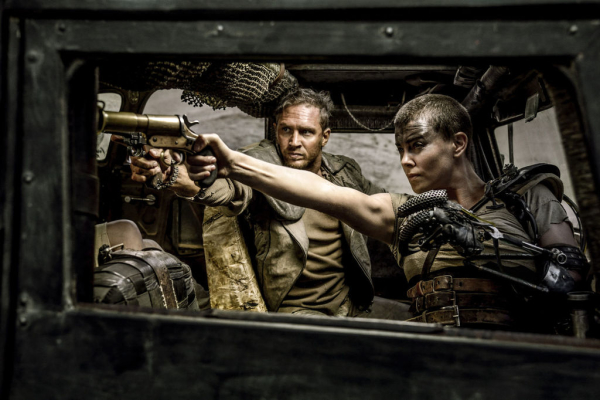 Look at these equals. Equally bad ass. Equally strong. Equally owning the fuck out of those guns.

Immediately after the movie was over, I wanted MORE of the movie. The same movie. Just play it again, Sam. Fucking NOW. That’s how amazing it was. I came home and stayed away fro an hour or so just letting it swirl through my brain and pump through my veins. I think, ultimately, that’s what Fury Road manages to do – pump through your veins. Then, I woke up and made the mistake of reading reviews. Don’t get me wrong. I didn’t read any of the “male rights activist” reviews. Because that’s all fucking bullshit. I’m sorry if you are so insecure your “masculinity” that you can’t handle having a female anywhere around you that is equal to you, or better than you. That’s not my concern. And if you were caught off-guard by a Mad Max movie being a Furiosa movie, well – you weren’t paying attention to the trailers and that’s not my concern either, Stupid.

Even the glowing reviews had me wondering if I had been watching the same Mad Max movies that these writers were.

Some stated that Max wasn’t so much a hero, but a sidekick. My interpretation is that he was neither. As I recall Max didn’t want to be a hero in any movie, he just wanted to survive – he stumbled into being the hero and then walked away from it. Every time. I also didn’t see him as a “sidekick” here. I saw him as an equal. As a partner, in the end. And I think that’s pretty fucking complimentary to dudes and dudettes, alike. (Yes, I kinda hate myself for putting it like that – but it’s early and I’m not editing it down right now). 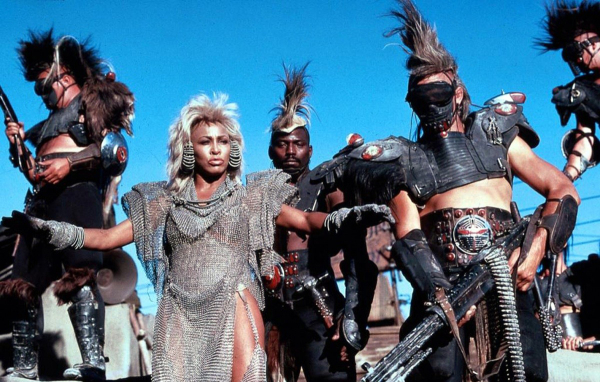 Do you even remember this? Come on!

Another review I read said Max wasn’t so much a warrior in this movie, but an individual driven to survive by his own haunted past. Well, no shit. That’s what he was in all of the movies. And, a lot of people were impressed and awed at the power of Furiosa in this film. As though NONE of the previous Mad Max films had powerful women. Maybe not the original, but come on. There was a warrior woman with a strong presence in Road Warrior and fucking Tina Turner owned the world in Beyond Thunderdome. So easy we forget, I suppose?

My favorite thing about reading through the reviews was the interpretations of purpose. Max doesn’t need a purpose. He’s a man doing what he can to survive a wasteland and his own ghosts. He’s human, and occasionally he’s reminded of that. Furiosa wasn’t setting out to save these girls because that was her road to redemption – it’s left ambiguous as to WHY she’s doing what she’s doing – except maybe to get herself out, get herself home… and before anyone gives me shit for that interpretation (which is Miller’s own), you can read it here for yourself.

Either way, maybe just go into the movie expecting a good time. Because that’s what you’ll get. You might get a little dirt in your face and a little parched. You might get a flame-throwing boner and a new vocabulary in grunts. All of which, completely fun. Ultimately though, you’ll get the shit kicked out of your endorphins – and when you remember to breathe again, you’ll ask for more of the same.