There are many ways to stick it to the Man, but doing it in Klingon takes flair.

Screenshot of the Klingon letter from Mr. Waddell’s Facebook page.

We’re talking a resignation letter in Klingon. Proper Klingon. The alien alphabet included. That’s pretty impressive to begin with, as any nerd can attest. The fact that it was a resignation letter from a politician (by the name of David Waddell)… wow, that’s impressive. It doesn’t matter if he’s a Trekkie, Trekker, or just a guy who wanted to make a point. That’s boldly sticking it to the Man in ways that no one has done before. Or if they have, it’s a fair bet they weren’t in politics. Seriously, check out this story:

Now that you’ve read that, let’s get down to the nitty-gritty of it. David Waddell is a guy who seemed to be sick of the lack of ethics in politics (and other politicians) and so decided to pack it all in. Amazingly he has goals of running for a higher office, and if he thinks that corruption at the lower echelons of government is bad then when he hits the big time he’s going to be in for a real shocker. If he quits there, he’s going to crash a Borg cube into congress as he leaves.

Before you think I’m looking at this as some kind of a joke, I’m not. Based on what I read, I’m proud of this guy. He stood up for what he believed in, and that takes courage and honour, something that… well, it’s something that a Klingon would do. Okay, maybe a letter of resignation may seem against the Klingon way of fighting. Klingons don’t quit, right? Maybe… but they’re also smart, and pick their battles. If he wants to continue in politics at a higher level, he may be trying to bring some honour to government on a bigger scale.

There are those who can scoff about his actions, and maybe he just resigned in this way because he was having a joke. I don’t think so. The longer resignation letter went on about things that the Klingons in Star Trek would have objected to in their own political system, a level of dishonour that needs to be addressed. It may have been an extreme way to make a point, but it’s certainly one that’s garnered some attention and that’s a good thing. In a world full of backstabbers, yes-men and people out to line their own pockets, it’s nice to see a politician who seems concerned with honour. 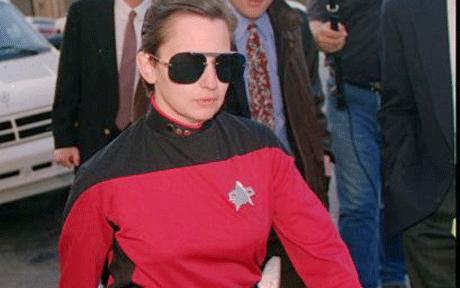 I remember Star Trek fan and juror Barbara Adams, who defended her choice of wearing a Star Trek uniform to the Whitewater trial. Trekkies and Trekkers are usually ethical and honourable by nature, and even if they get knocked as geeks and nerds by those who don’t appreciate the show, they carry some good messages with them. They hope that people can be better to make a better world together.

I don’t know if David Waddell is a Star Trek fan, although I believe he is. I don’t even know if he’s an honourable man, but I like to believe that he’s that too. I’ve only read the article, so I’m no expert. But if he is, then he’s every bit the Klingon that a good politician should be.