Days of the Dead or What About Bub?

So, without further ado… 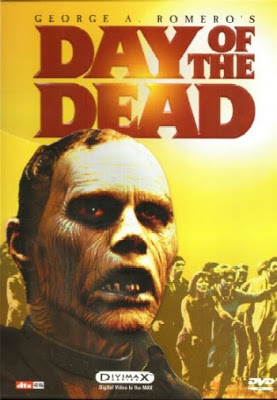 Day of the Dead (1985) shows the zombies regrouping above ground; shuffling their way through baron cityscapes and barely surviving, as it were. All the while, underground, a team of scientists and military personnel search for a cure, a reason, a something to keep them going. Searching for survivors reaps little reward and the military men are getting restless. The scientists below are experimenting on the living dead and learning more about them. As the science gets weirder, the zombies get smarter and the military men get madder with their mediocre amount of power. What could possibly go wrong?

Here is what I love about Day of the Dead (1985): pretty much fucking everything. 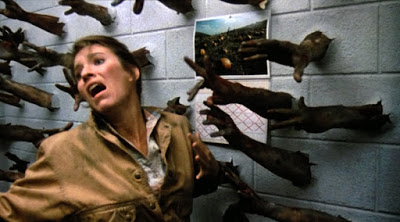 Romero has spent the better part of two and half films (I’m counting the remake of NOTLD) making up for the piss poor excuse for a female character, Barbra, and here we get to see an intelligent, compassionate, badass in Sarah. I don’t always ask for my females to take the lead, but when they do, I say +1 to that shit. Not only do we see better written and developed characters on the whole, we see increasingly intelligent zombies. Now, while this is something that I believe Romero has poo-pooed** in other films, here he does it exquisitely. The build up to an intelligent zombie was two previous films in the making, and even within Day of the Dead (1985) does it takes some time to learn whether the zombies are actually intelligent, or acting on instinct. Brilliant.

The progression of madness amongst the lead scientist, aptly nicknamed Frankenstein, can presumably be paralleled with the progression of aggression amongst the military unit. I’m assuming anyone stuck underground long enough will go a little kooky. If you have guns, you shoot some shit. If you have zombies, you dissect some shit. Yeah? Yeah! As we learn more about how the zombies function – for instance, they don’t need to eat to survive, they just instinctually crave to do so – we watch civility slowly devolve into something worse than becoming the undead with an unfounded desire for brains. I see what you’re doing there, Romero. I see it. 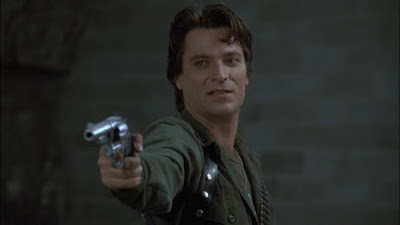 It doesn’t take much to get you hating on the military in Day of the Dead (1985), which doesn’t say much, really. But what does say a lot is how Romero manages to get you feeling something for the zombies; they are herded like cattle for slaughter – except for research; they are shown processing information and even put on display to showcase how they can still utilize their skills from their “alive” life. It makes you question for a moment if you should really be sharpening your machete. (You absolutely should be, by the way).

And all of those feels you start feeling for the zombies are only highlighted by Bub. The most likeable zombie in all of cinema. The most… human. Fuck movies like Warm Bodies, I don’t care that that zombie was falling in love. Turning human to get laid, essentially. Bub develops a relationship and begins to remember and learn and process. And, just like Frankenstein’s monster, he loves his “creator” and eventually gets sweet, sweet revenge for the mistreatment of humans at the hands of the big, bad military leader. *Insert maniacal laughter here* Honestly though, Bub is spectacular. I salute him. Ha! 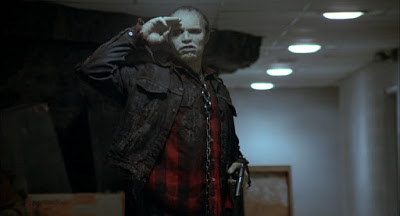 So, yeah, Day of the Dead (1985) is probably my favorite Romero Dead movie, and really, it’s a movie I require other all zombie movies to try and live up to.

Enter Day of the Dead (2005). This is everything a re-whatevering shouldn’t be. Really, who thought this movie was a good idea? I have to admit, first: I only just watched this for the first time yesterday, and second: I was so bored and uninterested that I spent most of my time watching bat videos on the YouTubes. 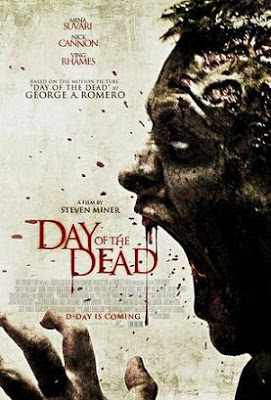 The gist of this pile of shit is that there is a zombiepocalypse taking place in a po-dunk town that is now being run by the military (surprise). The virus is slowly spreading and no one quite knows what to do except keep people in quarantine and try to get the situation under “control.” The main character is Sarah, a military Corporal with what is supposed to be a presumably complicated past – she doesn’t load her guns, what?! As Sarah and her Private cohort, Bud, make their way through town discovering new infected and trying to get to safety, her Private becomes infected (yes, I know what that sounds like, I high-fived myself as I typed it). Lo and behold her Private had a crush on her making him “intelligent” and keeping him from attacking her and their group of survivors. Some shit goes down and JUMP SCARE. The end.

Honestly. This heap is a prime example of everything you can do wrong when remaking a movie. First, Day of the Dead did NOT need to be remade. Second, you made a piece of shit. The characters were uninteresting and hardly strong. The military presence was a non-issue. The zombies looked more like they had the plague, boils, or leprosy than a case of being fucking undead and rotting. Did I mention I wasn’t interested in this and paid more attention to bats? Ugh. 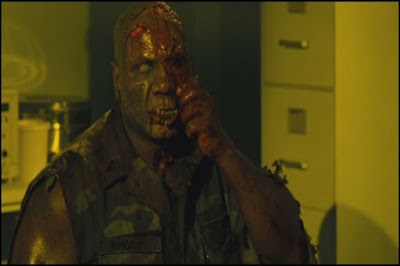 There were a couple of saving grace moments – mostly having to do with Ving Rhames. Who, sadly was not brought back as a boat captain – living or undead – despite the ending of Dawn of the Dead (2004). Firstly, when Ving Rhames insults your town, you say “yes, sir” and muster on. Secondly, when Ving Rhames becomes a zombie and starts eating his own face, you stop watching bat videos and relish in that shit.

But that was pretty much it.

This movie did NOT live up to the standards of the original – which I recommend promptly rewatching to wash the taste of the re-fucked up version out of your eye holes. *salutes*

*Not to be confused with the unofficial sequel Day of the Dead 2: Contagium (2005).

**AUTHOR’S NOTE: I don’t begrudge Romero any of his ranting, raving, or poo-pooing of other zombie films. They all owe him credit for paving the way for them. So, keep on grumpin’ on, George.