JOHN FINNEMORE’S SOUVENIR PROGRAMME: the cabin pressure guy has more than one trick up his sleeve.

Home/Nerdery Publications/JOHN FINNEMORE’S SOUVENIR PROGRAMME: the cabin pressure guy has more than one trick up his sleeve.
­

JOHN FINNEMORE’S SOUVENIR PROGRAMME: the cabin pressure guy has more than one trick up his sleeve.

Very nearly as critically acclaimed in its native Britain as that other show John does, the Souvenir Programme is performed by John and fellow voice actors Simon Kane, Carrie Quinlan, Lawry Lewin, and Margaret Cabourn-Smith, as well as piano player Susanna Pierce. John’s sketches deal with a variety of topics, from classic literature and children’s stories to historical figures to dealing with people in modern life. Sometimes clever, sometimes silly, and often both, the one thing the show is not is boring. 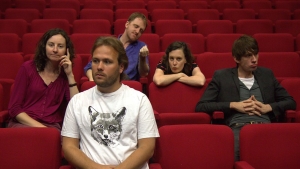 Every episode features a string of totally unconnected sketches, save for one running gag every show. The gags have included the British army in World War II attempting to use cats as airplane navigators, an art museum audio tour aimed at five-year-olds, even – in a brilliant fourth wall break – the cast of the show attempting to say some nice things about Belgium in their sketches after making a joke at its expense early on in the show. Some of these may sound either stupid or boring, but trust me, John is able to squeeze all the humor you could possibly get out of them.

The sketches do pop-culture and historical references better than anything I’ve ever seen on SNL or any other show. The very first episode has a sketch where Winnie the Pooh comes home to his friends having set up an intervention for his “honey abuse”. (“It used to be funny how a bear likes honey, but it’s not funny any more!”) And when the sketch skewers modern life, it gets deep and sometimes way too relatable – like the guy John meets in a bar who just speaks his mind, or the moment when Lawry calls out John for pretending he doesn’t know who’s calling him when he answers his caller-ID phone, or even when John attempts to express the inner thoughts of a dog at the vet’s. There are even musical numbers. “My Dog Doesn’t Know He’s Ugly”, “My Baby Don’t Care”, and “Captain Dinosaur” are some of the show’s greatest hits, made even funnier by the fact that John is the one member of the cast who can’t sing, and knows it. 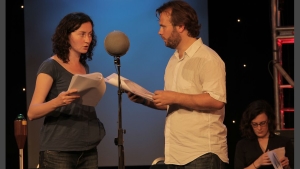 John tells Carrie a bedtime story. Carrie doesn’t like it.

The majority of episodes end with a “ghost story”, narrated by John himself. These stories pretend to be suspenseful and terrifying, and are loaded with clever wordplay and surreal silliness. “It happened when I was leaving this club one night not two months ago…but four years ago.” “I leapt into my car, and in no time at all, there I was in my car.” “It was he who had famously shot three tigers with the same bullet after tricking them into posing together for a photograph.” Etc, etc. The stories deal with witches, spirits, pirates, trains, and even a Christmas tale, never without John’s signature way with words. Here’s the first one.

John Finnemore proves he’s a man of more than one comic talent with the Souvenir Programme that bears his name. Every episode is full of endlessly memorable quotes and moments that I laugh at for weeks (then again, I never get tired of comedy). It’s available on iTunes right now – go download some episodes and thank me later.