John Constantine: The HECKblazer OR Just Another Nail In The New 52’s Coffin

John Constantine: The HECKblazer OR Just Another Nail In The New 52’s Coffin

It has recently been announced that DC/Vertigo would be canceling the long running and well loved series “John Constantine: Hellblazer”. The news saddened me as this is one of my favorite all time series and, in my humble opinion, one of literature’s (yes, literature) finest characters.

My sadness was, however, short lived and quickly turned to rage when, in the same breath that they canceled the book, they announced that the character would work his way over to the “New 52”.

And I growled “FUCK YOU” out loud to a room filled with furniture that was soon reduced to kindling.

Now I’m not going to say it wasn’t John’s time to go. He got 300 issues out of it. That’s pretty amazing in a world where fans can’t seem to keep a Moon Knight series afloat to save our lives. (Yes, I am a die hard Moon Knight fan. What of it?) 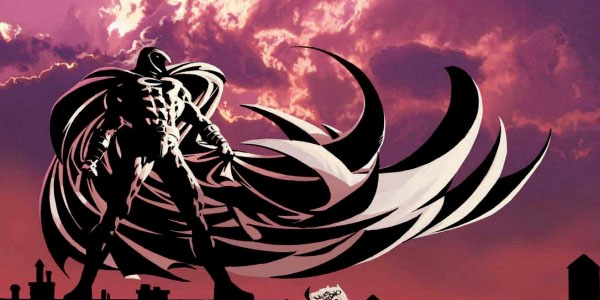 But to have him jump on the New 52’s sinking ship? Are you FUCKING KIDDING ME!?!?! Not that there isn’t a precedent for this, mind you. DC has a long history of bringing Vertigo books either into or back to the fold of the main universe (see Swamp Thing, Doom Patrol, Animal Man & Jonah Hex for examples) but did they not get the memo?

Say what you will about how any of the above examples have done in the main universe but if you want to argue with me about whether they were better suited in the main stream versus the more fringe-oriented Vertigo I have three words for you. Two Gun Mojo. If you don’t get the reference do yourself a favor and go pick up Landsdale’s “Jonah Hex” runs and you’ll quit with the discussion.

All that being said, you could scrub any of the above examples clean and wedge them back into the box from which many of them came from but you’re gonna try to do that with John Constantine? ARE YOU FUCKING HIGH!?!?

You’re going to take possibly the most un-heroic, cowardly, chain smoking, hard drinking, drug using, Judas with a pocketful of silver style hero since, well, Judas and try to make him work in a mainstream book. You’re going to take a bastard dreamed up by Alan Moore and had runs by Garth Ennis, Brian Azzarello, Mike Carey and the Right Royal Reverend Warren Ellis with all of their complexity and heresy and affronts to common decency and try to shoe horn it into “JLA: Dark”. And you think that people are going to show up to this illustrated abortion?

You would have to scrub him so clean and shiny that, guess what, he wouldn’t be the same character anymore! And that just ain’t right. It just ain’t.

This is the same character who betrayed everyone he ever knew to save his own ass up to and IN-FUCKING-CLUDING John Fitzgerald Kennedy! If you haven’t read “Damnation’s Flame” by Garth Ennis, let me set the scene for you: 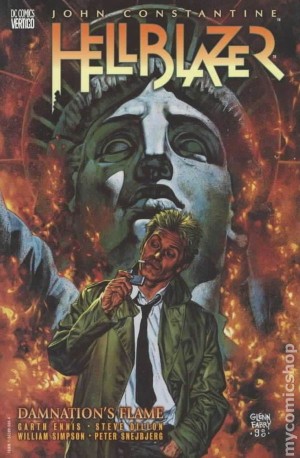 John has wound up in a hellishly twisted version of America where it rains deadly dollah-dollah bills (y’all), Lady Liberty is gangbanged and the only friend he has who can help set things right is JFK who’s walking around holding his brains in the back of his head.

The two wander this nightmare version of America to find their adversary in the White House. They arrive at the enemy’s office, pop open the door and walk in for a confrontation. Guess who it is? Yes, it’s a demonic and frightening version of another martyr president, Abraham Lincoln.

Well Ole Convertible Headed Jack steps up to the plate and tells Honest Abe how it’s going to be. Monologue out of the way he turns to Constantine for a high five and a “You feel me, dawg” only to find that his backup has bugged the fuck out.

Kennedy gets his arms ripped off and is forced to wander this dark world with his brains leaking from his head while John is getting the fuck out of dodge.

Now let me set this scene for you:

The forces of Darkseid are invading en masse. The world is in jeopardy of being completely over run. THE JLA SPRING INTO ACTION!

Superman takes to the front of the pack and says, “Okay, I’m going to need you to this and you to do that and, oh, JOHN!”

Constantine fishes out a smoke, lights up and says “Wut?”

“I’m going to need you to take out that flank of massive, well armed, insane aliens with your dark magi…where’d he go?”

John’s stolen a spaceship and is headed off world with five crates of Silk Cuts, all the dark ale and whiskey he could find and whatever illegal substances weren’t nail down before the big blue Boy Scout could finish his speech. He’s gone and he ain’t looking back.

Now he’s gonna feel guilty about it and he might even come back to save the day. If he does come back, though, he ain’t gonna do it until after Superman’s head is on a pike, Wonder Woman is in a family way, the Flash has had his limbs cut off and Aquaman is being slowly roasted on a bar-b. 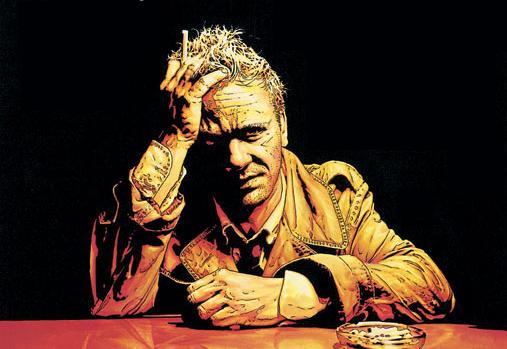 That’s the John I know.

That’s the John I love.

He is the guy who would call Superman a wanker to his face, call out Batman for cozying up to his young “wards” and probably get cheeky with Wonder Woman (which is probably why she’s really in a family way in the post-Darkseid scenario now that I think of it). But guess what, you in the New 52? That ain’t the hero you’re gonna get.

You’re going to get a watered down version of the real deal that could never smoke, drink or fuck up as much as the real deal did. That’s one of the reasons he’s managed to get a 300 issue run, because he is more like us than we want to admit.

We’d all like to say that when the shit hits the fan that we would be Superman or Captain America or, at the very least, The Tick. The reality is, though, that when shit really, and I mean REALLY, hits the fan most of us are gonna try to save our own skins first and foremost.

Now, yes, probably not to the extent that John does but we are going to take care of ourselves. We’re not going to dive headlong into trouble, doing our best Jesus Christ Pose and blindly have faith that might will make right.

We’re going to have doubts.

We’re going to be afraid.

John Constantine, The Hellblazer, didn’t just have a wonderful run because he was a horrible bastard, though admittedly I loved that too. He had a wonderful run because we could all look at him at his worst and see a bit of ourselves in the images. We could see us at our most appalling and desperate and pathetic and then we got to see that image of ourselves some how come out on top and survive the fight.

He had failings, short comings and more issues than Time/Life magazine. He was human (which is more than I can say about any of the cartoon characters in the New 52) and I think that’s a fitting epitaph for the book and the character.

“John Constantine. He was human. Now piss off you tosser.”