I’ve got three names for you, ready:

Yes, I am going to assume that his middle name is Fucking – and no – there is nothing you can do about it.

Why is Harrison Ford important to the next generation of nerdery? The next round of impressionable minds of baby geeklings? Oh, I don’t know – let’s find out: 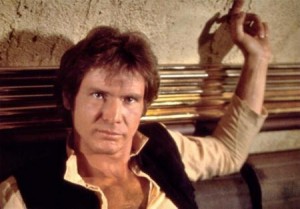 I don’t care if you have zero nerd leanings, you know who the hell Han Solo is. Why do you know who Han Solo is? Because, he’s a fucking intergalactic pimp. That’s why! The intention to make him a throw away character with a giant fucking furry by his side (I love Chewbacca by the way, so fuck off you think that was derogatory), failed in the most epic way imaginable. Han became the hero that Star Wars fans WANTED. Because, lets face it, Luke was a bit of a ninny (thanks to @ThatCarlyGirl for that wordspiration). Also, because someone had to get the girl, it could be Darth Vader it wasn’t going to be Luke (they really tried to push the envelope with that one didn’t they. Incest is wrong mmmmkay?) – so, enter Han.

He’s a Smuggler ,Space Flyboy … A SMUGGLER, SPACE FLYBOY! Did you take that journey with me? I sure hope so. Flyboys are hot enough, navigating through the skies like they own that shit, but put them in space, doing bad things, with an amazing ship, a giant gurgling best friend, and an interstellar record for making the Kessel run in less than 12 parsecs and you’ve got a hero on your hands, my friends. A confident, anti-hero that can train young minds to make friends with any species, get the girl, save the day, and shoot the fucking bad guys FIRST.

And no, I’m not talking about the steaming pile of dung that is the Kingdom of the Crystal Skull. Because, fuck. 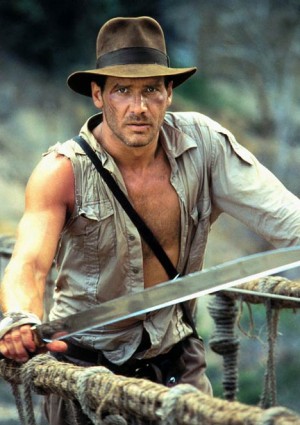 Indie is that guy that everyone wants to be. Even me. Shit, especially me. He’s smart and funny and handsome and everyone loves him. And he gets to travel the world and be an archaeological pimp. He’s got books – which is good for teaching the baby nerds that reading is good! He’s got fighting skills – which is good for teaching the fledgling geeks that being able to protect yourself and others is important. He’s got a fear of snakes – but fuck that – snakes are creepy. He’s got a whip – which teaches us things we can’t talk about in the presence of children.

He travels the world, being brilliant, getting into scrapes, fighting bad guys, winning women and generally being awesome and dirty (dirty in the sense that he’s outside, geesh, minds outta the gutter guys). WHICH, teaches nerdlings that a little dirt won’t kill you, because the geek gods know, kids need to be outside now and again. AND if they are outside fighting off Nazi’s and recovering priceless artifacts even better. ALSO – if they are pretending their father is Sean Connery – well, you’re doing something right! 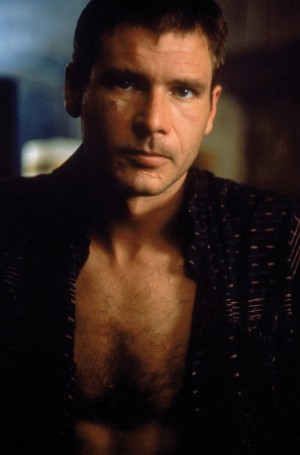 Ok. So, Bladerunner’s not your average geekling movie – but hey – who’s to say that teenagers can’t still be called geeklings. Deckard is a little dark. A little mysterious. A little too smart and a bit angsty about his plight in life. But he does his job well, and teaching tiny nerds about a good work ethic surely keeps them from turning into useless nincompoops (again – thanks to @ThatCarlyGirl for the wordspiration).

Deckard is an amazing character for all nerd generations because he MAY be (I say MAY, because I like the mystery of it) a replicant. A biorobotic, outing other biorobotics. You know what that is? That’s, fucking biorobotic pimpage, is what that is. Why is this a good thing? Because, Deckard isn’t aware of whether he is or isn’t a replicant – he just keeps keeping on, and that teaches the geeks of our loins to be okay about who and what they are!

Now, I’m all for putting books, like Neuromancer and Snow Crash, into your newly spawned nerds’ hands – but let’s face it, at the rate we’re going, they’ll be able to stream movies straight into their brain pans with a blink of an eye – so, why not start them off right – and leave them feeling a little less sure about their actual parentage. Because, really, that’s what good nerd parents (nerdants?) do.

SO – All of that said, Harrison Fucking Ford, has made an impression on geek culture as a whole, not to mention, when you’re baby geeks are older and can handle even more awesomeness, he dominates some more amazing film genres that will keep them admiring his epicness for years to come.

I leave you with this: Breed geeks because you love the nerd pimp that is Harrison Ford. And he knows it.

10 Fucks
were given in this article.