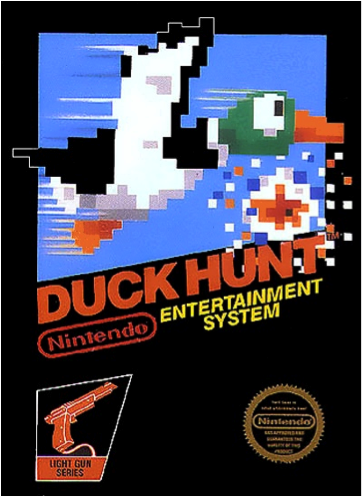 I played my first video game at age 4. As I took that brightly colored rifle in my hands and shot at the pixelated ducks flying across the screen, I felt a certain kind of accomplishment that has stuck with me for two decades. After my Duck Hunt days, I quickly branched out into the joy that was my SEGA Genesis and Game Gear. Do you remember those?! At age 8, I was HOOKED on trying to get young Simba to hop from one giraffe head to the next, always falling to my doom. Years later, with my gaming prowess significantly leveled up, I went to defeat Scar and his cackling minions. Sadly, my Game Gear had flashed the final “GAME OVER” and the winning end credits have eluded me ever since.

Gaming has been a constant in my life; maybe it was the escape, or maybe it’s just because video games are f*ing awesome. I attached myself to mostly guy friends because none of the girls my age could understand the fun of evading obstacles in a starship or storming a beach against the Nazis. Some of my fondest memories include my father, who diligently encouraged my enthusiasm as he attempted to teach me how to crack the puzzles in MYST (I never got it) and learn German history thanks to Wolfenstein (AchTUNG!). My dad was always there to play a round of Medal of Honor or try out the latest joystick (Woo!) technology with a sweet aviation game. (X-wing, anyone?) It’s one of those things, looking back, that I really didn’t understand at the time. I thought gaming was a normal father/daughter activity. Surely every girl in my class dreamed about Sonic’s glittering gold rings? (Not their style of jewelry, apparently.)

It wasn’t until high school that I began to realize my hobbies weren’t exactly popular. Girls snickered at my conversations with guy friends about the latest TCG or rolling characters for a new campaign. I gravitated toward like-minded nerds, hiding away in a classroom during lunch playing Axis & Allies; I wasn’t popular and I wasn’t being fawned all over. Fast forward to age 26 and the “Golden Age of Geekdom.” In the past 5 years, being a geek has become the coolest thing ever. From light sabers to critical hits, it’s all mainstream acceptable. Things have definitely changed in such a short time. It’s even somewhat acceptable to be a Star Wars junkie in corporate America. I can tell business executives about nerd-related items and I’m not shunned; I’m considered cute, or adorably weird.

And every day, I utilize my skills honed through hours of Counterstrike (respawn = second chances, people!) to play a productive, professional member of society.

So why the switch?

As technology continues to advance, the need for video games increases exponentially. Games allow for a constantly changing environment/stimulus that perfectly caters to our diminishing attention spans. (Oh, shiny!) Until we can successfully recreate the Holodeck, gaming is our outlet for imagination, creativity, escape, strategy – you name it! So rock out with your d20 out and X, Y, Left Trigger your way toward a screen to work on your skillz.

Fads come and go, but gaming has always been, and will always be, an epic part of our culture. Game on.