Dungeons, Dragons and The Doktor

Hello, my name is The Doktor and I’m an addict.

Many of the articles you’ll find on Gaming Addicts Anonymous deal with one player’s experience with one particular game. My own story is a bit more abstract, as it deals with a game that I’ve played only rarely, but that I’ve felt glued to for most of my life. I’ve grown up with console games from Nintendo to Xbox360, I’ve done my tours in the World of Warcraft, but there is always one game that I find myself staring at from outside, my nose pressed up against the glass of it, like a hungry street urchin staring down a plump prized goose.

This game, my friends, is not just any ordinary game. It’s Dungeons & Dragons, and it’s bigger than all of us. I’m not one to say that “my nerdy interest is more important than your nerdy interest,” but any serious take on American gaming culture has to begin with the riptide influence of D&D, the game that syncretized a century’s worth of fantasy fiction (Lord of the Rings, Conan, and HP Lovecraft, to name a few) and tied it all together with a dizzying array of points and algorithms.

To a 5th grader exposed to the game for the first time, it seemed like something impossible: a fusion of math and storytelling. I don’t know if I can tell you much about the first time I played the game. Only that it was the next neighborhood over, in some friends’ sunroom, that I played a Lawful Good Fighter, and that at some point I acquired a bow that shot insanely over-powered lightning bolts. I remember smaller, more ephemeral, details, like laying eyes on a d20 for the first time and hearing the satisfyingly bouncy clack it made against the table, or looking at the minefield of erasure marks left by the pencil as it scribbled in and erased entries on my character sheet. 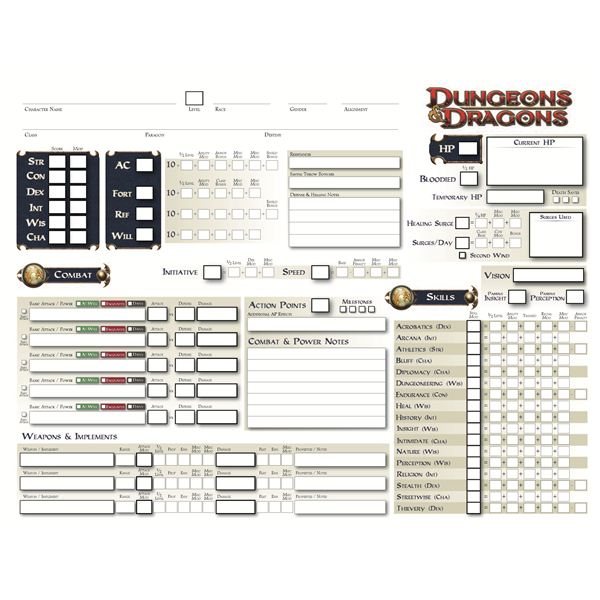 The hooks were in. I wouldn’t play D&D for another 15 years, but somehow it was never far from my mind. I’d sometimes invest birthday money in RPG sourcebooks for other games, just to enjoy the emotional and mathematical tethering to the original. Console RPGs, driven by some similar mathematical logic of slow self-improvement, filled the gaps for a time, but always with the frustrating knowledge that “chance” was being moderated outside my cone of vision, by some impersonal silicon processor. Years spent in high school drama covered the bases of social play, perhaps, or afforded some degree of creative role-playing. But even after college, my nose was pressed firmly up against the class of the one, the only, the original.

Why, after all this time, was D&D such a profoundly addictive and seductive topic? Why, after so brief an exposure, was I so hopelessly contaminated?

1. The fiction. D&D is not just a fantasy universe, but a fantasy multiverse. The Final Fantasy series may have been my first exposure to the combination of sci-fi and fantasy elements, but the D&D framework, so infinitely extensible, was always part of it.

2. The drive for mathematical perfection. It’s no small feat to try to model the chaos of combat in a few mathematical rules, but D&D had its ways to adjudicate complex situations with a complex array of algorithms and rules.  There was an exciting new language embedded in those arcane acronyms: HP, XP, AC… I’m even old-school enough to remember THAC0.

3. The combination of the two. Roll a dice, get a story. Tell a story, roll the dice. Videogames, as a sheer fact of their existence, combine these two spheres, but they can’t do so with the same scene of rampant and restless imagination as a crowd of D&Ders can. Every math problem tells a story; every narrative encodes the logic of the game’s algorithm. To a generation falsely convinced that math and language proficiency were purely a model of left- or right-brainedness, the combination felt, and still feels, revolutionary.

And to tie all three points together, you get the social scene of it all. Let’s face it, no one born in the last 30 years hasn’t at least heard of the game and doesn’t have at least some pre-set notion of the game’s constituency. (D&D is, perhaps, the single most stable and recognizeable reference you can use to define “nerd culture.”) To the callous outsider, it combines two of nerd culture’s less savory traits: escapism and mathematical purity.

To the insider who might take the time to play a session, read the books, or talk to those that play, it can be something more profound. It can be creative, funny, and challenging. Better yet: it can be an engine, an infinitely extensible engine, for creating more creativity, more humor, and more challenges. And for a 5th grade kid whose tastes and aptitudes drifted towards the pratical and the applied, D&D was exactly that: a creative engine into which I hoped to plug myself, in the hopes that my natural taste for mathematical reasoning could be converted into something more authentic.

Perhaps that’s the key. My D&D addiction, such as it is, is one tinged with hope. It’s the hope that a lot of awkward kids have growing up, that they might find some way, some language, for converting the strengths they have into strengths they don’t recognize yet. I still haven’t played much D&D in my life, though I certainly hope to do so. All I know is that my fascination with it has nothing to do with seeing it as one of the great totems of “nerd culture,” and everything to do with feeling out some impossible space where math and story can be the same thing, and where my taste for one doesn’t have to rule out the existence of the other. If that’s not a reason to keep playing, I don’t know what is.