Home/Nerdery Publications/Don’t Bury This Movie, It’s Not Dead: The Serpent & The Rainbow
­

The things we do for the advancement for medical sciences are pretty extensive. From lab rats, to human trials, to personal zombification… Okay, well, maybe not so much that last one. But, once upon a time… 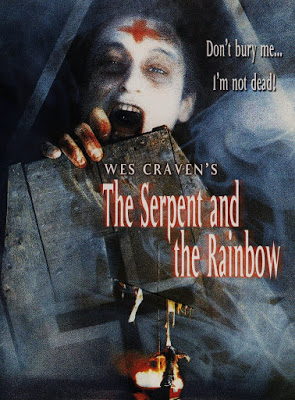 The Serpent and The Rainbow is a 1988 horror-thriller loosely based on a true event penned by Wade Davis. It’s a retelling of Davis’ investigation into the drugs used by a voodoo society in Haiti to induce zombification. Literally, the drug lowers the metabolic rate, causing the person to appear dead and allowing them to later be dug up and “reanimated”. While Davis didn’t actually become a zombi – at least not anymore than any other researcher – his book did inspire the nightmare fuel that is the movie.

Bill Pullman plays our hero, researching the “zombi drugs” to find a new anesthetic – only stumbling into something more hellish – he must battle his own demons, deadly cats, corpse brides, giant spiders, and being buried alive. Through him, we are thrown into a world of voodoo that is far more serious than other movies ever let on. Instead of focusing on what we know are not actual zombies – instead zombis – we get a titillating taste of a mystical religion that is secretive and scary. 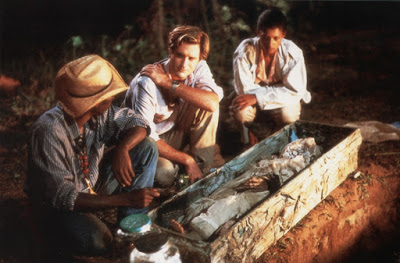 While our focus is typically, solely on Pullman, without the side characters his story wouldn’t move forward. He is joined by the beautiful heroine, Marielle, who runs a clinic; a well-connected local leader and voodoo priest; and Mozart, an expert in all things voodoo – and lying. Mozart is the character that keeps our feet planted in reality as he lies and swindles Pullman about the power of voodoo. As Mozart’s “magic” becomes real, so does the rest of the voodoo.

Each segment of the film moves you further within the occult circle, creating a sense of suspense and fear of what you will find closer to the center – which is a rare find in the world of horror films. The Serpent and The Rainbow never loses sight of the original story – medical research – all while continuing to pile on the horrors of a drug induced state combined with an unfamiliar land and an unknown way of life.

What I really love about this movie is that it is filmed on location in Haiti – aiding in taking the viewer to a foreign place. Unlike other zombi movies you aren’t in tune to where the sets begin and end. The costuming and makeup effects are impeccable – even when Pullman awakes from a zombi-dream, to an equally horrific scene in his own bed, and has to battle the Haitian military in his tighty-whities.

In my opinion, this is one of (if not THE) best film that Wes Craven has directed. Most well-known for bringing his own nightmares to life with A Nightmare on Elm Street, Craven actually managed to bring other’s nightmares to life through The Serpent and The Rainbow. What we often find laughable about mystical religions, here we find horrific. What usually is lost in translation regarding hallucinations, here seems completely plausible. And, what we don’t know about voodoo (which is way more than we think), here seems like a very good thing.

Zombie Honey’s Rating: 4.5 out of 5 fears of being buried alive in tighty-whities.