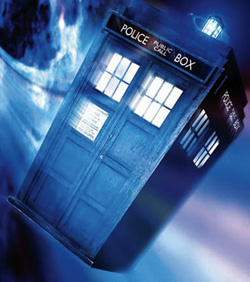 A month ago, if you had showed me a photograph of a blue police box, I would have been able to tell you it was called a TARDIS. I would also have been able to tell you that the LED flashlight my friend Sarah carries is supposed to be a sonic screwdriver. I even knew that the bronze colored the trashcan robots wielding a mixer blade and a plunger are called Daleks and they tend to scream, “EXTERMINATE!” in a high-pitched mechanical voice.

While I had a basic cultural knowledge of Doctor Who and some of its canon, I had never actually seen the show. David Tennant was still Barty Crouch Jr. from Harry Potter to me. Billie Piper was the British girl on the show about prostitutes and Harriet Jones: Prime Minister was Mrs. Crowley from Downton Abbey. (Actually, Penelope Wilton will probably always be the plucky Mrs. Crowley to me, but I digress.)

I write as if this Doctor Who ignorance was a period buried deep in my past, but the terrifying and unbelievably shameful truth is that I watched my first episode of Doctor Who, “Rose”, only three weeks ago. Aside from a five-year love affair with Battlestar Galactica, sci-fi has never really been my thing. I’ve never watched an entire Star Wars film all the way through in one sitting and I have never seen Star Trek. Ever. (Ok, that’s a lie. I did see the recent re-boot of Star Trek in the theater but only because I really like Zachary Quinto.) I don’t even think I like Wil “Wesley Crusher” Wheaton enough to go back and watch TNG. Now before people show up at my door with pitchforks and torches and threaten to take my geek credentials away from me, I’ll explain that I’ve always been a magic, elves and talking-trees fantasy nerd. As a child, The Hobbit, The Princess Bride and Willow captured my imagination. Aliens and outer space never really interested me, even though I did get to attend NASA’s Space Camp in middle school.

Nerdy (and even non-nerdy) friends have been telling me that I should hop on the bandwagon and watch since the 2005 re-launch of Doctor Who. I resisted for over seven years, mostly because the show always seemed really campy and cheesy. Well, it is campy and cheesy but that’s exactly what I love about it now that I’ve powered through four seasons in less than a month. It took a few episodes to really get into it. The walking mannequins in the first episode touched a phobia I didn’t even know I had, and I had quite a bit of trouble connecting with Christopher Eccleston’s Doctor.  It wasn’t until the episode “Father’s Day” left me weeping in the fetal position that I knew the show was more than sci-fi cheese. It was raw and emotional. It also had me HOOKED. 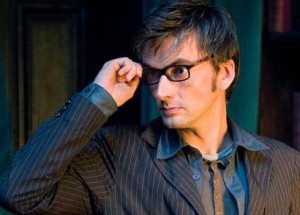 Even though I had trouble connecting with Nine at first, I was still a bit bereft to see him go. That lasted all of one hour, until the new Doctor finally changed out of his post-regeneration pajamas and into his famous pinstripe suit and Converse trainers. Beyond the fact that the 10th Doctor and I share a proclivity for stripes and Chucks, he was instantly relatable and likeable with that wicked grin and tousled hair. David Tennant also seemed genuinely thrilled and geeked-out to be playing the part. He never seemed like an actor playing a role; he seemed to utterly embody the persona of “The Doctor”.  It was love at first sight for this budding Doctor Who fangirl.

Ten’s first season was a rollercoaster of adventures with Rose, and when he left her on Bad Wolf beach, I was crying right along with her. The Martha and Donna seasons were a blur of wacky fun, though by the end of season three I think I missed Rose more than The Doctor did. When their storyline finally got resolution, I was a bit embittered, but happy. As of today, I’ve finished season four, but haven’t dredged up the courage to watch the specials and say goodbye to my beloved Ten(nant) yet.

Despite the fact that I hear Matt Smith’s Doctor is his own special brand of foppishly endearing, I’m just not ready. It’s strange to care this much about something that wasn’t even a part of my life a month ago, but here I am. Eventually, I’ll watch seasons five through seven and move on to Torchwood (Oh, I could write PAGES about Captain Jack Harkness. He’s my spirit animal.), but for now I’m taking a little break. My time with the tenth Doctor has been like a whirlwind romance, and I need a bit of a breather before I do it all over again with number eleven.