It’s a new year and a new time but the same ole John as we jump into the second half of Constantine’s first two parter, “The Saint of Last Resorts”.  You know most of the players and there’s a lot to talk about so let’s just get to it, shall we?

I’m going to open with a shot of praise and then a bit of a gut shot for a group I’ve questioned in the past.  The writers.  But before I delve into that, and then other stuff, I need to clear something up.

If you’ve gone through some of my previous entries you should know that I’m NOT a professional writer.  Everything I have to say is purely opinion and, on top of that, it’s an uneducated opinion.  I’m sure that the staff of Constantine are well-paid, professional writers who have years and years of experience in the field.  I’m a hack with an internet connection.  Don’t confuse what I write with anything other than the thoughts of someone who really digs a show.  Got it?  Good.

Also, I’m guessing if you’re reading this then you watched the episode.  If not, well, why the fuck are you reading this?  If you haven’t watched it, stop reading, go watch the show and then come back.  I’ll wait. 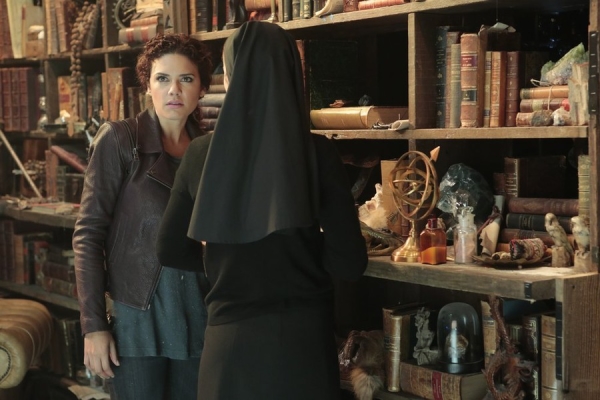 Good: Breaking Up The Team

I’m the first to admit that I thought Zed was kind of a drain on the story and that they should focus on just John and Chas.  This episode proves me wrong with the story flowing almost effortlessly between the two teams of Chas, Zed and Ann Marie and the solo John in jail.  By breaking things up the show managed to make me feel as though Chas and Zed were a force to be reckoned with while their leader was in a compromised state.

That being said, with the group starting broken up all over the place, it forced the writers to devote a lot of screen time to reestablishing points for folks new to the situation.  We started with John telling Chas what was going on.  John’s gone so Chas brings in Zed and has to tell her the whole story all over again.  Then they need the nun, Anne Marie, so they have to tell her the whole story again.  It seemed a bit redundant and not the most economical use of screen time BUT it did provide for several nice character bits for all of the actors involved.

As a means of storytelling that’s not always the best for the viewer but when writers know their characters and the actors involved it can prove to bring out some shining moments.  This was a success for the writing staff…for the most part.

I know it’s going to sound picky as shit but this show has done a great job of getting the little touches right.  That being said, this was not an episode that held up well under a microscope.  Now, hold on, there were good things under the microscope but there were a few colossal fuck ups as well.  For example…

With Zed, who has just escaped from a culty bunch of lunatics and stolen their van, if you’re going to hide while talking on the phone don’t you think it would be a good idea to get as far away from the van as possible.  But, there she is, getting the rundown from Chas and ducking a car she thinks might have more culty lunatics in it.  If you’re so scared of them finding you why are you hiding so close to their stolen van?!

I can imagine the conversation happening inside the car of nutters hunting her.

Cult Member #2: “Huh.  Why yes it is.  But come on, she wouldn’t be dumb enough to hide behind that.  Let’s not investigate it at all.” 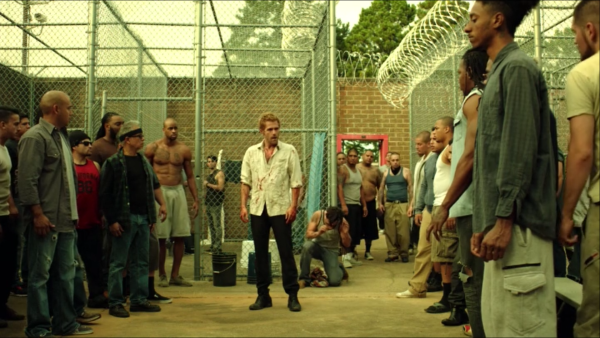 Next: The prison attack.  John killed five well armed gangsters on the outside and now he’s in prison with a bunch of their buddies.  Said buddies obviously want revenge so they corner him in the chapel.  That would be three, barely armed buddies who don’t seem to understand how math works.  Three is not greater than five.  One shiv is not a bigger threat than multiple guns.  That’s a flaw with writing.  He killed five in one scene?  Good.  Now make sure there’s a bigger threat in the next scene and not two less.

Lastly: Location, location, location.  You’re in Mexico.  You’re home base is Atlanta.  You’re carrying a man “knocked out” with a shit ton of heroin.  That’s not a hop skip and a jump type thing.  I can’t imagine a scenario where they can fly with him completely knocked out or in a body bag for the whole trip.  I understand there’s a certain amount of willful suspension of disbelief but come on.  I have to fly from Boston to Arizona several times a year.  To start, there are almost no direct flights and to end you’re not keeping getting someone in that state that far without having someone, anyone, in customs or on the flight say, “Um, this seems odd”.  It was just a point hanging in the air that baffled the shit out of me and that falls on the writers. 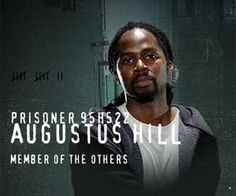 And one for the road: How’d you miss that?  You’ve got Harold Perrineau in the cast and you’re in a tough as nails prison.  HOW THE FUCK DO YOU NOT MAKE AN “OZ” REFERENCE!?!?!  If you haven’t seen OZ, take the time to go enjoy HP in that.  You’ll know why I love him so.

So, I had jury duty last week.  I didn’t get picked but that doesn’t mean I didn’t have to sit around doing fuck all for almost an entire day.  Lucky me I had a smarty phone and access to Comixology.  I downloaded a Hellblazer arc and passed my time enjoying Mike Carey’s “Hard Times” story.  Then I re-watched this episode and really took in the little touches the show pulls from all over the Hellblazer universe.

In “Hard Times” John enters prison as a “fish” and leave a king.  Now, I know we’re probably never going to see any of the great Hellblazer stories done legit on the show but having a bone thrown our way from time to time is brilliant, even if it’s on a very small scale.  The writers could have dealt with John’s time in lock up several different ways but instead they showed how the character can take power when his back is against the wall.  They did a great job of showing the strength of will the character actually has at his disposal.  It was well planned, well plotted and well executed. 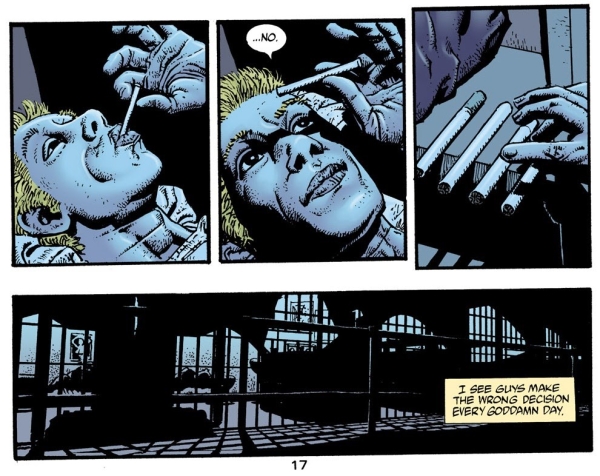 On the whole, this was a swing for the fences by the writers but it came up just short of the wall.  Hold on there, before you think that’s a bad thing, you have to remember that a shot to the wall is never a bad thing unless it gets caught.  This was a solid triple by the writers.  They didn’t get the home run but there’s still the chance to drive in runners.  There’s a lot to be proud of and, overall, it was a success.

Now, let me deal with all the rest.

The show was packed with all the things that make John Constantine such a dangerous and, yes, subversive character.  There were a host of shady characters to enjoy with Jeremy Crutchley being just a wonderful amount of slimy as British Consulate Stanley Gibson, Efren Ramirez turning in a fun sleaze ball turn as Julio and Werner Daehn creeping the shit out of me as the original tempter from the Garden of Eden, Vicente.  I’ve always said that the show works on a higher level with their side characters.  But I’m getting off track.

This is a episode that was packed with all the things that you love about the Hellblazer world.  There was violence and scary looking shit left and right.  You had a man swallowed by a snake demon from hell.  You had blood and death and drugs and you had it right where it was supposed to be: at 10:00 PM on a Friday night.  Wait…NBC moved it…TO EIGHT FUCKING PM!?!?! 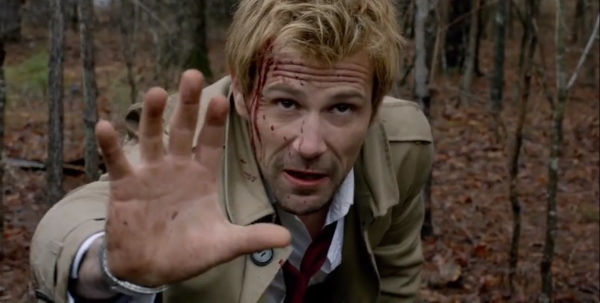 And this, dear readers, is where my paranoia comes in to play.  NBC is looking to tank this show.  Now before you start asking me about my tin foil hat and the black helicopters that are following me via the chip in my brain head, let’s look at some numbers.

Constantine has started to thrive.  They’ve kept a big part of the lead-in audience from Grimm.  Their viewership is up amongst 18-40 somethings.  They seem to be gaining headway where they were at.  The show hasn’t been a massive hit but it has started to gain an audience.  People are sticking around.  So, the logical thing to do would be to move it to an earlier time so they don’t have the lead in support and keep the existing nastiness turned up to 11 so all of the douche bag whiners can jump all over the high levels of blood and now heroin use.  That should ensure success.

Sarcasm is yet another service we offer here at the Nerdery Public.  I hope you enjoy it.

Listen, NBC, you knew what you were getting in bed with.  S&P, censors and all the suits and ties who go into a show like this saw what it was well before you made the move.  There is no way that you move the second half of an already mean motherfucker two part episode to an earlier time when you know there’s questionable material in it to start.  It was almost as if you were thinking, “We need to find a way to kill this thing and no one seems to be complaining about the content.  I know, let’s put it on earlier so there’s an offhand chance that some little kid will see it and ask mommy and daddy about heroin.  That’s sure to scare up the right group of pissers and moaners”.

Grow up, Peacock.  You got in bed with John Constantine.  He can be a winner for you if you give him the chance.  No stop fucking about and let the show do what it’s supposed to do.

My name is Darwin Law and I’m going to keep supporting this strange, bizarre fucking monster of show even if the network that puts it out seems to hate it.