I like stupid humor as much as the next person. I laugh at fart jokes. The word “butt” makes me giggle. I sometimes have the sense of humor of a 12-year-old boy and I am NOT ashamed of this. However, this does NOT mean that I don’t find intelligent, accessible, well-thought-out humor absolutely fucking hilarious. And you might not expect to find this kind of humor in a sitcom, especially not one made for the radio. Maybe a British one. Well, it IS British. ANYWAY.

The thing I’m sort of referencing and now talking about is a BBC Radio program called Cabin Pressure, and it is sometimes genius, sometimes heartwarming, and always knock-you-on-your-ass funny.

Written by John Finnemore (who also writes the very funny audio-only sketch series John Finnemore’s Souvenir Programme), the series is about a cast of characters working at a terribly small and inefficient airline (or “air-dot” as they only have one plane). Carolyn Knapp-Shappey gets her husband’s old airplane upon divorcing him, and hires Captain Martin Crieff and long-suffering First Officer Douglas Richardson to fly it for a brand new company, MJN (My Jet Now). She even gets her dim-witted but well-meaning son Arthur to be the airplane steward. What follows is hours of hilarity as the crew fly around the world getting into all sorts of mischief. 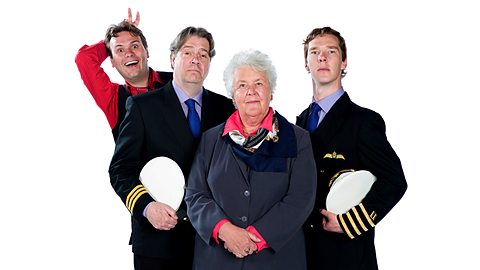 John Finnemore is an absolutely brilliant writer in the comedy department and it certainly shows here. He sets up moments early on in the episode, waits for you to forget about them, then brings them back right at the climax of the story to pleasantly surprise you (and the characters, who probably needed that moment to get out of a sticky situation). Aside from that, though, the genuine story in each episode – and indeed throughout the whole series – never detracts from the humor. Martin (played by THAT Benedict Cumberbatch) gets to be the captain even though he’s younger than Douglas (Roger Allam, who you may have seen in The Iron Lady and The Woman in Black) and took seven tries to get his license, but only because he agreed not to be paid at all for his work. Douglas makes it a point to bring Martin back down to earth when his status is getting him a little too uppity with his knack for dry wit. And meanwhile on the sidelines, penny-pinching Carolyn (Stephanie Cole, who you probably won’t recognize if you don’t watch a lot of British TV) is trying her best to keep her airline from folding.

The real comedy star of the show, however, is Arthur. A thirty-year-old man-child, Arthur is played to perfection by the show’s writer John Finnemore. Relentlessly optimistic, he always comes in at just the right time with the funniest possible thing to say. He always has a smile on his face, but as soon as he gets an idea, you know that MJN is about to get in a heap of trouble. Whether he’s trying to fix leaks in the porta-cabin (by making them “easier to see”…or just bigger), order the catering (thinking he’s getting small chickens but really just getting chicken-flavored baby food), or star in MJN’s safety video (and not being able to demonstrate how a seat-belt works), you can bet that if Arthur’s doing something it will probably go wrong.

Of course, the rest of the crew can hold their own in the silly department, and land themselves in ridiculous situations too. Sometimes they have to trick rich old men into thinking they’re going to Timbuktu. Sometimes Carolyn ends up having to deal with the unwanted advances of one of Douglas’s old coworkers Herc Shipwright (Anthony Stewart Head, who you may know as Giles on Buffy the Vampire Slayer). And sometimes Martin and Douglas decide just on a whim to give poor Arthur the Christmas he’d been hoping for, even though they’re on an airplane the entire time. The stories take hilarious twists and turns, and though not every ending is a happy one, you know that the MJN crew will be right back at it again next episode…or do you?

Cabin Pressure is a high-flying comedy success, from Abu Dhabi to Zurich. If nothing else, listen to it just to hear critically acclaimed actor Benedict Cumberbatch saying the following in a terrible French accent: “Then I put the egg whisk into the snow-drift, whisked it up like a blizzard in the bear’s face, then under cover of his confustion I bounced away on the pogo stick! Thank you, goodbye!”

All episodes except the series finale, Zurich, are currently available on iTunes. Get them. Get them all.