The Evil Dead films. You know them. You may love them. I do.

The first Evil Dead film was the second DVD I owned, when I suddenly found myself being dragged into the 21st century. My first DVD was the three-disc Rocky Horror Picture Show set, sadly now lost to me. But Evil Dead, that was something even more special since a friend flew 6000 miles just to give it to me.

Okay, that’s not entirely true; he also flew that distance for a wild party that lasted 4 days and resulted in him believing he was being attacked by a 7-foot tall praying mantis. Still, he brought me that DVD and it was something amazing. When he put it in my hands, you’d swear it was like I’d just been handed a bar of gold.

A few years later I managed to buy the Evil Dead Trilogy box set. The first film still holds up as a good horror; the second is (for me, anyway) the best of them all, a great horror with a sly dark comedy edge; the third – Army of Darkness – is more comedy-horror than horror-comedy, and that makes it the most fun of all three. The documentaries on there are great, the commentaries are brilliant… to this day it’s one of the best box sets ever.

Except for one thing, and you probably already know what it is:

No, wait, that’s not it (although I’ll confess it isn’t that great)… it’s the alternate ending to Army of Darkness. Although technically it’s the original ending, which makes the S-Mart ending from before obsolete. The S-Mart ending is the alternate ending now even though that’s the one I and countless others had come to know. It’s not the post-apocalyptic ending that now features that bugs me, because it’s really good; rather, it’s the loss of the other one.

For those out there who don’t know it, the older version had a bookend to the intro with Ash working at S-Mart. After narrating his time-travelling tale, Ash has to return to work and gets to flirt a little with a co-worker. A Deadite attacks, Ash leaps into action and saves the day, and ultimately he gets in a little smooching at the conclusion. Hail to the king, baby!

That’s the ending I remember from the video I saw, one New Years Eve many years ago. I watched it shortly before visiting the local skateboard park with a friend and a bottle of, uh… soda-pop. Anyway, my friend and I then got smashed on… soda-pop… lay back on the ramp, watched the stars and talked about Army of Darkness and that groovy S-Mart ending. Also, it wasn’t really soda-pop. 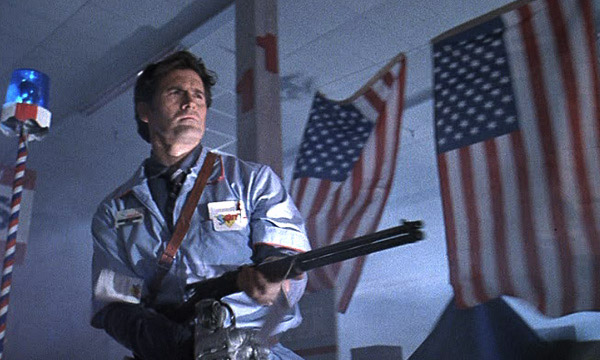 I know, the ending that’s now available on DVD (and the box set I own) is the one that was originally intended. It’s a great ending, and I’m not knocking it. Ash goofing on the magic sleep potion and waking up after the apocalypse is hilarious and demented, and totally in keeping with his character. He’s a hard-luck antihero and things go wrong for him all the time! He didn’t go back to work at S-Mart, he went crazy in a post-apocalyptic future!

I can’t blame anyone for that ending being on the DVD I have; it’s a good ending and I know deep down that it’s the right one too.

I just… well, I miss that S-Mart ending. I know it sounds silly, and yes it’s available online. I may be wrong but they may even have released a DVD with both endings on it now (I haven’t checked because I’m lazy… but if they haven’t then why not?!). I’ve just been a bit nervy on the whole special edition and directors cut things ever since George Lucas took back the toys he gave me as a child, tinkered with them, and then returned them to me in a jazzed-up-but-less-fun state. 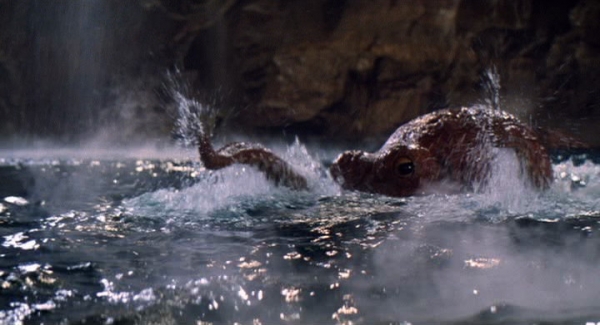 With special editions and directors cuts, sometimes we get Blade Runner, which is better for all the tinkering. Sometimes we get E.T., which hasn’t been made any better at all. There have been alternate endings made for lots of films, and in the case of Scott Pilgrim I actually preferred the one they didn’t use. Films have bits cut out, added again and endings changed all the time. I’m just glad they didn’t use the damn-awful octopus scene that got cut in The Goonies.

But I’m getting away from that alternate ending of Army of Darkness. Which ending was it again? I’m actually a bit confused, since the original ending was the post-apocalypse, the release was the S-Mart one and then the one they use now is the post-apocalpse one again. So which one is really the alternate one? I’m going to say… both of them.

Maybe I’m mad, but since I like them both I’ll say that it’s one of those weird Evil Dead things. Like the second film being a weird redux of the first, where Ash seemed to have amnesia because he took a second Linda off to that same cabin from the first film, found the same damn tape recorder with that evil incantation on it, and went through yet another bad night. Bruce Campbell reckoned it’s just because Ash is a bit of an idiot, but it’s just as easy to say the second film is an alternate universe version of the first one. 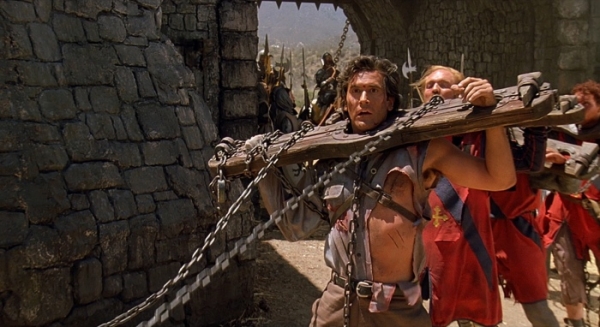 And, hang on… the start of Army of Darkness contradicts the end of the second film too, so that’s an alternate universe thing. Then there’s the new Evil Dead film, which appears to be an alternative to the alternate, with Ash popping by a bit late for the party. So here we’ve now got, what, 5 alternates? The funny thing is, none of the fans seem to mind. I know I don’t.

It’s a selfish request, but I want more Evil Dead films. I want Bruce Campbell to return, and I don’t care if it doesn’t quite fit in continuity because there hasn’t been much continuity anyway, what with all these alternates and duplicate Ash Williams’s running about willy-nilly. As long as they’re good, that’s what really counts. Indiana Jones missed that boat, but Ash could catch it easily.

I wouldn’t mind seeing S-Mart and hailing the king again either, baby. In my alternate history, more Evil Dead sounds like a good thing.