In this case, the college roommate is John Hope, and his most recent book is Silencing Sharks. It’s the story of Peter Bench (yes, I got the reference), a deaf 13-year-old boy who learns that he can hear sharks — and the sharks need his help. 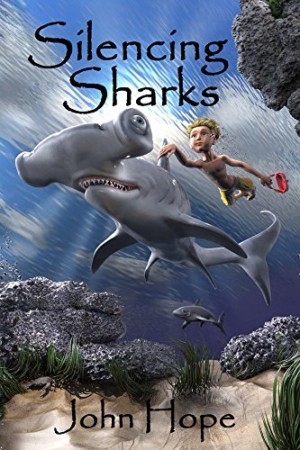 Hope admits that he’s a huge fan of sharks, to the point that one might call him a shark nerd — and what are we on this site if not nerds for our own favorite things? Silencing Sharks is well-researched and full of interesting information about all the shark species even tangentially mentioned in the text. However, what I was most surprised about in the book wasn’t the sharks; it was the creation of one of the most realistic deaf characters I’ve ever read. Those of us who aren’t deaf and don’t know how sign language works often think that sign language interpretation is simple one-to-one word translation. But as the book shows us, that’s not necessarily the case. Peter’s speech is a series of brief, active sentences.

It’s more than that, though. I’ve never really thought about how my ability to hear affected my ability to learn to read, but Peter regularly does — because he doesn’t know what words sound like, he’s had difficulty in school (specifically with his reading and comprehension); his frustration is evident every time this comes up, and it comes across perfectly. Other difficulties facing deaf kids also arise: Peter’s hearing aid and its ineffectiveness, issues making himself understood to people who don’t know or won’t learn sign language, and a different understanding of body language and interpersonal interactions than non-deaf readers might not have.

Plus, Peter has nervous farts. That probably doesn’t help his self-esteem either.

Peter’s family is well-drawn, but it’s clear that his favorite relative is his Scandinavian uncle, Sverrir. It helps that Sverrir was the first in Peter’s family to learn sign, and outside of Peter is the most fluent. But even Peter’s father and older sister get enough character development to make them more than just “there”.

And then there are the sharks. It takes a few chapters, but eventually Peter figures out that he can talk to them, and that they have names. Apparently the head shark in the St. Petersburg, Florida, area is named Rodney, and once Peter befriends him and earns his trust, all he has to do is mention Rodney’s name and the other sharks will at least stop to listen. And there are a lot of sharks — hammerheads, bull sharks, a megamouth, blacktips, and even a great white. The author is a self-admitted shark enthusiast, so each of these sharks gets its own personality, as well as scientifically-accurate descriptions.

I would also be remiss if I didn’t mention the author’s accurate and vivid depictions of life in the greater Tampa area, especially along the Intracoastal. I’m from the other side of Florida, but the descriptions were quite accurate based on what I know of that region, and they included all four senses available to Peter, who is the sole POV character.

The book does have a plot to go along with all of this: Peter learns that humans are cutting the fins off sharks, and he volunteers to help stop them. Of course, then he has to figure out what to do, and as a thirteen-year-old without a lot of friends, there may not be very much. But when he discovers who’s been hurting the sharks, he has to team up with two boys who used to bully him to get the authorities to step in.

Silencing Sharks isn’t perfect. It’s sometimes a little slow; the abundance of details can make the story drag a bit; the action scenes seem a bit far-fetched for a thirteen-year-old (although Peter’s reactions to them and actions within them are absolutely believable); and the language seems to be a little out of Peter’s league, especially given how he himself says he has issues with reading (and if you’re not reading big words, you’re certainly not using them in your inner monologue). But by making the story fully realistic in the areas where he could (I have literally never read any other story or book, for example, where the main character spits into his mask to keep it from fogging up, but that is how you do it), it lets me give at least a little pass to the areas that were harder to believe.

Ultimately, Silencing Sharks is a story about family, and about doing the right thing no matter how difficult it is — no matter what adversities you face or how different you might be from other people*. Nothing is shied away from or glossed over, and it makes the story that much more accessible because of its realism. It’s a great look into the life of a deaf person (who can hear sharks speak), and an overall enjoyable book.

The author provided a review copy of this book. As previously noted, the author and I used to be roommates, and have known each other for twenty years.

Note to Parents: The author’s website indicates that this book is recommended for fifth through eighth graders. In places it’s very realistic and there is a little potty humor, but the biggest issues are peril and the violence that ensues. Still, if your kids can handle the first Harry Potter film, they should be okay. Of course, you should use your own best judgment when it comes to your kids.

* And sharks. Lots and lots of sharks.