Listen, it’s no big surprise that I’m closer to a knuckle-dragging neanderthal than most guys I know. This isn’t me bragging, this is just my sense of humor; my beige tinted way of looking at the world. And I’m okay with it. I’m okay with it because I’m also educated. I recognize sexism when I see it. I know when gender roles are being used as tropes. I even understand, and embrace, how modern day women have benefited, and continue to benefit, from the women’s movement – despite my disdain for the term “feminism” and the vocal minority of women that turn it into a hateful movement.

I said all of that, to say all of this: I saw Jurassic World the other day and I fucking loved it! (note: I do know that cavemen didn’t live with the dinosaurs, although, hello – how awesome would that have been?) 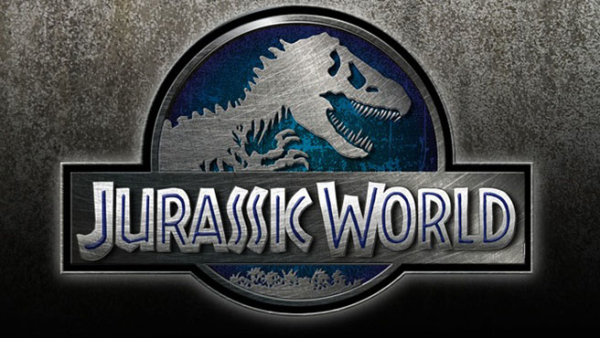 I understand that what is entertaining to one person isn’t necessarily entertaining to another. I also recognize that having something you believe strongly in, and for, can cause you to seek out things that don’t actually exist. And, in the event they do exist, you have to use a magnifying glass so fucking big that you burn a hole into whatever you’re searching for. The more I thought about the article, the more confused and irritated I got. So, before I begin, here is where I say: I have no issue with the author personally, I take no issue with the fact that these are her points of view, I have no issue with the writing quality of the article. And, here is where I give rebuttal: 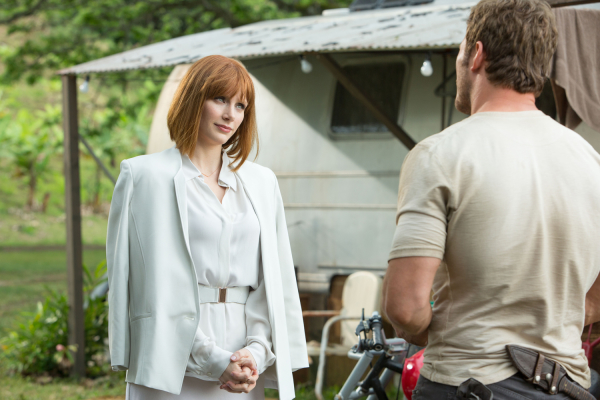 TMS Point: “Was that scene nothing more than screwball banter that was misconstrued outside of the larger context of the film? Well, the movie’s out and, unfortunately, it seems the scene isn’t what we were promised by the film’s director – and the move does feel sexist.”

BELLA SMASH: Well, if people on the internet are going to judge an entire movie by a fucking trailer they deserve to be disappointed. AND, if after you’ve seen the movie, you are still going to take the clip out of context – that’s just awesome.

TMS Point: “Sure, Bryce Dallas Howard’s Claire occasionally gets a few scenes when she gets to kick a little ass; but it is almost always her mirroring Pratt’s character. Plus, those scenes of Howard are often punctuated with the “It’s a girl” wow moment, which is just annoying – like when she’s running in the dark in front of a T-Rex and we’re treated to a close-up of her stiletto heels. But that’s only at the end of the film; for the majority of Jurassic World, Claire is a punchline for the macho guys’ jokes, or the character who represents what’s really wrong with this park.”

BELLA SMASH: Uhm. WHAT?! Did you watch the same movie I did? She runs a fucking JURASSIC. PARK. Not only that but, if I recall correctly, Claire leads the way into the valley. Claire saves Pratt’s character from a flying dino of doom. Claire lures the T-Rex into the final battle. Oh, boo-hoo, we got a look at her heels. That’s fucking amazing. She’s RUNNING. FROM. A. DINOSAUR. IN. HIGH. HEELS. I’m a chick – despite the dude with the tits comments – and I can’t fucking do that. I didn’t get the “It’s a girl” punchlines, either. But I also didn’t get the macho guys’ jokes. Mostly because they weren’t there. Not to mention, she wasn’t what was really wrong with the park, she was what was wrong with corporations wanting more money. And, it wasn’t even her fault, she was just doing her job – that was made pretty clear. But, hey, let’s ignore ALL of that development. 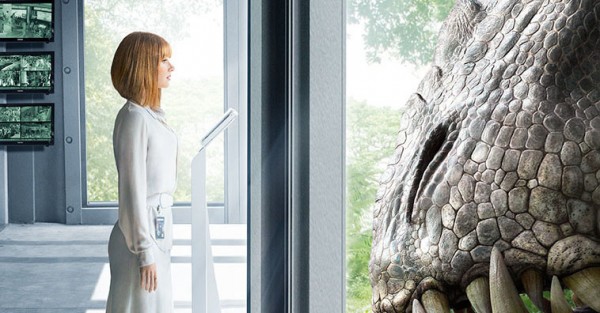 TMS Point: “These parallels that movie makes with Claire’s personality and her lack of motherly instincts are why I had a big problem with the film. After initially being introduced to Hollywood’s most recent quintessential mom actress, Judy Greer (who deserves so much better than these bit parts), we meet her opposite: Claire. Greer is clearly presented as Howard’s “good sister,” sending her two children off to spend time with that screw-up, Claire…”

BELLA SMASH: I can draw parallels to almost anything, too, but I prefer to be entertained by my entertainment – especially when it isn’t necessarily trying to create parallels to piss you off. When did Judy Greer become the quintessential mom actress? She was a back-stabbing bestie in 13 Going on 30, she was a werewolf demon bitch in Cursed, and she is still voicing a masochistic sex fiend in Archer. Hello, if there are “better roles” for her, I’m sure she’ll take them. Can we take a minute to look at the fact that Greer is actually whiny in this movie? She’s going through a divorce and rather than communicate with her relatively grown children about it, she sends them away. How in the hell is that painting her as the “good sister”.

TMS Point: “Nonetheless, Claire is presented very early on as a bad person of questionable morality because she has asked her assistant to watch the boys while she goes to work. I certainly didn’t share Chris Pratt’s look of shock and disgust when she makes the horrific reveal that she doesn’t know her own nephews’ ages! I couldn’t pass that test either, and I know a lot of good, sweet parents who have to reminded of their own children’s ages (and call each other by their sibling’s names from time to time)”

BELLA SMASH: *blink* She wasn’t presented as a bad person of questionable morality. She was presented as a busy person who probably should have thought that through BEFORE agreeing to take care of someone’s kids. But hey, she had her shit mostly together, so it’s forgivable. And you know what, the second “joke” about her not knowing the kids ages was just lame. Not because she didn’t know. But because we already knew she wouldn’t have known since she couldn’t remember how long it had been since she last saw her nephews. As for knowing parents who have to be reminded of their kids age and names – yeah – that happens. It happens to Mama Blitz with me, and I’m an only child. But, she comes from a large family – it’s forgivable – but I still give her the side eye. 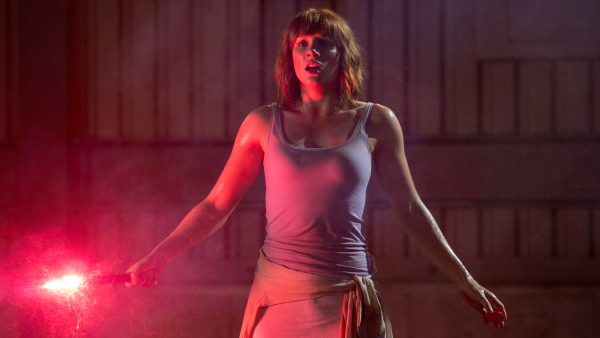 TMS Point: “Not being close to your nephews isn’t some kind of proof that you lack maternal instincts, the way this film suggests. Beyond that, Claire not having children, and declaring she doesn’t want children, also isn’t some sort of fatal personality flaw. But Jurassic World clearly sees it this way, believing the natural progression of women has them evolving into mothers, and those who don’t have that desire are somehow deficient of humanity.”

BELLA SMASH: What the what? Fucking. Seriously? At no point does Jurassic World make her lack of wanting or having children appear to be a personality flaw. In fact, in the one instance that it would appear that way – her “good sister” tries to give her a guilt trip about it – Claire shuts that shit down. End of story. Done. Driving on. Literally. (at this point in the article, I’m starting to wonder if the author stopped paying any attention the parts of the movie that are in direct contradiction to her POV)

TMS Point: “Unfortunately, we don’t see that kind of passion for her work, or even much of a personal life, for Claire the way we did in the other Jurassic films… Claire often does seem to be using her power as a defense; but considering the number of men who work for her and still treat her with macho-disrespect, one can understand that. Top of that list is Pratt’s character, who speaks to Claire in a way that would get most men fired for sexual harassment.”

BELLA SMASH: Can we focus for a second on the personal life thing? Clearly there was some history not entirely outlined between Claire and Pratt’s character, does that not count as a personal life? Being focused on her job and doing it well, does that not count as passion for her work? There is a HUGE difference between being a scientist, on the ground, meeting the very things you research and being in charge of running a facility and making it profitable. HUGE. I’m still having an issue with the macho-disrespect, as I didn’t see much of that. Unless you wanna talk about D’onofrio’s character who had macho-disrespect for EVERYONE. As for the way that Pratt’s character speaks to Claire… as if familiar? As if they had a date? As if they had a history? As if he didn’t work for her and was just comfortable talking to her like a fucking person and not someone he needed to tip toe around? Huh. Imagine that. 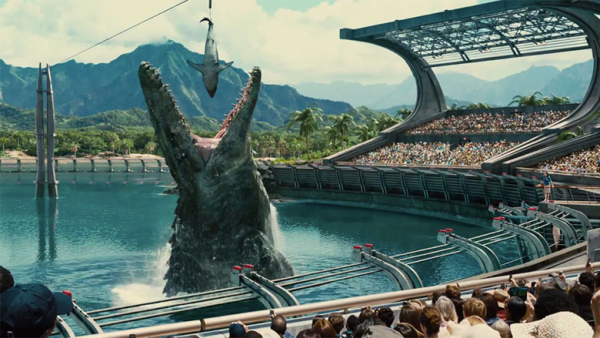 I stopped here. I couldn’t read anymore. I started to shake my head and stutter my arguments. I felt as though the author of the article wanted to bring back all of the characters from the past Jurassic movies and mash them together into this new character. While that would be possible, and yes, awesome – it also wasn’t. This wasn’t that character. What I saw was a woman who had a head on her shoulders doing a massive job and not taking any shit for it. Using her power as a defense mechanism or not, she was using her power and using it well. She stood tall, she lead the way, she fought back; next to her male counterparts, and sometimes above them. Claire didn’t submit to a man. She didn’t change her opinions because of a man. She didn’t do ANYTHING for, or because of, a man. Except her nephews – which was, ultimately, her job.

If you wanna be upset about inequality in this movie, be pissed about the randomly, gratuitous death of Claire’s assistant, and the lack of anything resembling justice in the death of D’onofrio’s character. Be pissed that while this movie made, at least me, want to go back and rewatch the first one for all of the awe-inspiring soul it had, and has, it did little else than feed my eye holes dinosaurs and action and violence. All of which I’m actually okay with, because I didn’t actually need Jurassic World to be anything more or less than it was. Yes, I even really dug the over-the-top fan service to the original and Chris Pratt, raptor whisperer.

…I mean, you can, that’s your prerogative and interpretation, but I might have something to say about it.