Mmmm video game turned movie. Don’tchya just love recycled media? Most of the time I don’t mind it, honestly. But, often, that’s because I enjoy trying to decide who will be cast in my favorite roles. These discussions are usually had while playing said video game and being generally bad ass. And therein lies the problem. You play a video game and you’re the badass character. You talk about who would play the other characters, or or your character, and you just keep on playing. Inevitably when the video game becomes movie – something seems off. Lacking. 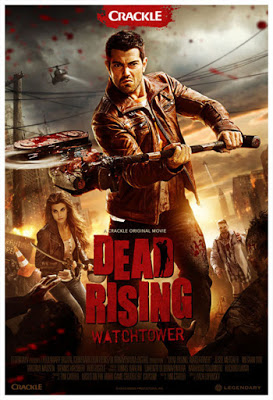 That’s not entirely the case with Dead Rising: Watchtower, but there are some things that are a bit rough around the edges; rougher than in the video game, that is.

“Present day. East Mission, Oregon is locked down after police find the bodies of what appear to be victims of a zombie attack. Zombies are not a new phenomenon, but outbreaks are uncommon. Past incidents were only just contained in time and the country is nervous. When two ambitious Net 2.0 reporters, Chase and Jordan, get inside the quarantine zone to report on a large group of civilians trapped in an inner city dome stadium, they realise they’re waiting for a rescue that isn’t coming.

Many of those abandoned inside are survivors of past outbreaks who carry the zombie virus in their blood. They only survive by taking the antidote once every 24 hours — a drug called Zombrex. When the local drug supply mysteriously fails, a small crisis explodes into mass panic and catastrophe. 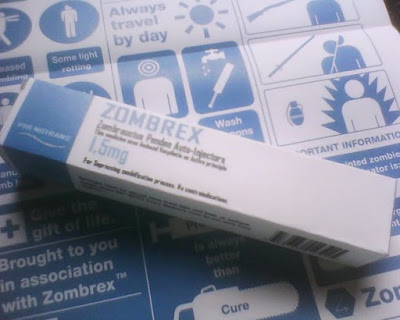 The story unfolds from two perspectives: survivors inside the city and officials and the media on the outside. Unlike virtually all other zombie narratives, the world hasn’t ended. The outbreak is merely a large-scale natural disaster that the rest of the world watches on TV. After Jordan manages to escape the quarantine zone, she sets out to unravel the truth behind the failed Zombrex drug, while Chase is trapped inside with a few others, battling to survive. Their perilous, action-packed journey to escape simultaneously forces them to question what they’re willing to do to survive and, ultimately, their own sense of humanity.”

Sounds like a lot to take in, yeah? It kinda is, but Watchtower manages to set up the plot and get the ball rolling with ease and interest. In this zombie world, you know what a zombie is. They have their own medications to keep the turn at bay. There is a background to the world and the characters, though thin, that is laid out with precision. It’s really pretty refreshing to watch the first half hour of Watchtower – despite the usual military take-over/shut down, zombies run amok trope.

There are a lot of nods to Dead Rising, the video game. And that’s always fun. Some quick slips into first person perspective and some fan service thrown in for good measure. There’s also Virginia Madsen who I have a soft spot for, because Virginia Madsen. Hello. The plot twists and turns are easy to follow, which is good considering the length of this movie. The protestors!!! And, lets not forget the awesome weaponry: homemade shield with spinning blades, rotating saw/weed wacker and melee weapon – I mean, COME ON! 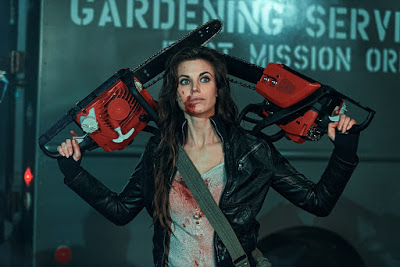 The best, though, is really the countering viewpoint filming style. Eventually you end up receiving three viewpoints. That of the survivors on the inside (of course), that of the military/FEZA (Federal Emergency Zombie Authority), and that of the media. Initially you dislike all three of these outlets of information, but eventually you warm to one more than the other. For me, it was the news media. While Franke West (played by Rob Riggle) is your stereotypical macho survivor, misogynist type, he is also the most useful survivor voice. He hits on the news anchor and gives seemingly ridiculous advice to kids about killing their folks, but ultimately, his true character comes through. His advice is sound and he is the poster child for what PZSD (post zombie stress disorder) would look like if/when it happens.

I take that back. The very best was the Allstate guy. You know the guy. He makes you feel safe and cozy with your insurance racket. Well, he was the big-bad military lead inWatchtower. There was something hysterical and disturbing in hearing his voice say these dubious things while still believing you were in good hands. My auditory senses were playing tricks on me. Which actually made the whole experience a bit more enjoyable. Well playedWatchtower. Well played. 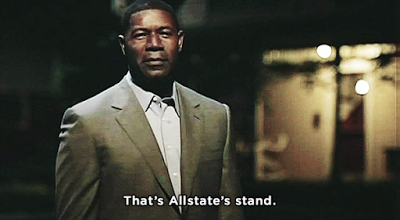 For everything that was enjoyable about Watchtower, there was something equally as horrible. I wish it wasn’t true, because I wanted to love this movie from beginning to end. But, alas… The character arc for our “hero” Chase was less than believable and mostly aided along by his female counterpart, Crystal. The problem here is almost exactly what our stabby Revenge Honey wrote about recently: The Manic Pixie Horror Dream Girl. With the addition of the little tidbit that Crystal is, in fact, infected, she’s basically here to propel the story forward with no real backstory of her own, and very little hope of a future that doesn’t revolve around Chase. So, that’s awesome.

The humor that seemed so promising in the trailer was lost. This disappointed me more than anything. This is a video game movie. The ridiculous should have been amped up to 11. The zombie clown was a solid 21, though.

And, my least favorite thing about Watchtower on the whole was the physical acting. Watching it was almost painful. It was like watching Rose McGowan in the Conan The Barbarian remake. Don’t get me wrong. I love me some Rose McGowan. But her physical acting leaves me with a pained face. I’m sorry, Rose. Basically, every action sequence relied heavily on the actors being comfortable with their bodies and their props, but rather than seeing that, I saw people who seemed to be confusing their limbs for props – which lead to some awkward (and painful for me) physical scenes.

I’m pretty sure they got all of the costumes from that amazingly “so bad it’s good” VanDamme movie, Cyborg, for the super baddies. This tickled me and I approve. 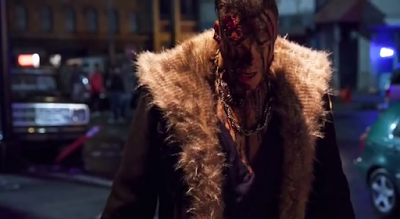 I’m a big fan of background movies – those flicks you can throw on while you’re reading, writing, cooking dinner, licking your wounds from a rogue cat attack. That’s pretty much all Dead Rising: Watchtower was. It was fun, but not fun enough to keep me paying 100% attention. It was thorough – but too thorough – at 2 hours it was about 40 minutes too long. There was a lot of filler plot that was unnecessary. Even my dear Virginia Madsen didn’t need to be there. There was, however, a perfect and very intentional set up for a sequel – slated to come out in 2016. So, there’s that.

ZOMBIE HONEY RATING: 2.5 combat boots and fur coats out of 5