It’s the first week of Vampire Month here at Horror Honeys and yours truly – the self labeled #HorribleHoney – has struck again. From the list of amazing vampire movies I could have watched, reviewed, live-tweeted, and flailed for – I chose Abraham Lincoln: Vampire Hunter; because of course I did. 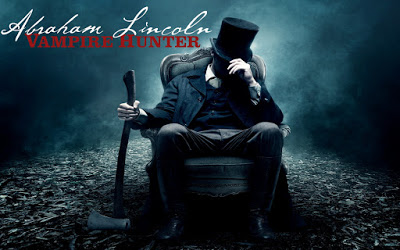 I know in my heart of hearts that vampires are monsters. The living dead. They are not supposed to be sexy. They are not supposed to illicit a panty drop. And yet, so much of what we consume regarding vampires does just this. Vampires, for most people, are the whiter than white gothic-romantic mysteries that they want to explore. Fuck me, some of them sparkle… and those are reviews for another day, dammit. Sometimes I enjoy the dark romance surrounding vampires in their newish lore – SOMETIMES. Other times, I want creepy, evil vampires being destroyed by men with beards.

I didn’t get any of that.

Abraham Lincoln: Vampire Hunter begins with Abe as a young boy witnessing his mother; 1) expressing her desire for all people to be free and then; 2) being murdered by a vampire. Abe swears vengeance and as we fast forward through time we see Abe getting drunk, presumably to increase his courage to kill a man. Or to kiss a woman (which we learn is the other drinking option according to Henry Sturgess). When Abe fails to kill the vampire he swore vengeance against, he and Henry form a bond built on the foundation of killing the undead. We are fast forwarded again several years to find that Abe is now married and the president. He soon finds that vampires are fighting for the south and the war may not be won in his favor. Luckily, he knows just how to destroy the vampires and abolish slavery.

I admit, I didn’t read the book. Mostly because I heard a thousand times over that it suffered from quite the same problem that Pride and Prejudice and Zombies suffered from: a legitimate story with some vampires tossed in for good measure. However, I did read some reviews and thought since it was going to be so much different, how bad could it be? Guys. It can be bad. It can be real bad. It can be four hours of your life to get through a two hour movie kinda bad.

I didn’t even get badass bearded Lincoln until towards the end, and by then it was a weird uncanny valley CGI Lincoln face. Not the whole time, but still, no one wants to rub their face on that. No one.

Trust me when I say, I didn’t go into this movie expecting any great commentary, or accurate information, regarding Abraham Lincoln, the Civil War, or anything else for that matter. Although, historical accuracy was snuck in there vis a vis the Underground Railroad. Still, I did expect to be entertained and that was hardly the case. 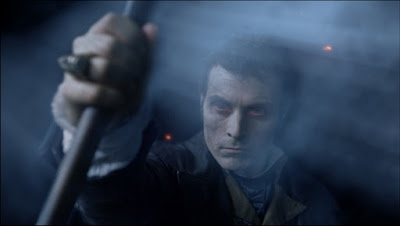 What I found was that the action wasn’t nearly as actiony as the sound effects would have you believe. The vampires seemed to be a bizarre cross between vampire and werewolf. And the movie lasted about 30 minutes too long. I know, because I was easily distracted by listicles of beautiful movie shots and images of men with beards and cats. Ok, to be fair, I’m always easily distracted by the latter. But still. I found that the movie was a bit too serious to take with a wink and a nudge, and where there were supposed to be winks and nudges there was just a sense of… huh?

What I did enjoy about this movie was the axe training montage. Every movie should have one of those. And the fact that Jimmi Simpson was a supporting character. And the top hat. The top hat was nice.

I’m going to go ahead and file this in the “I watched it so you don’t have to” pile. You’re welcome.