Let me be perfectly honest before we dive in here: I am always willing to hoot, holler, rave, chime in, and give more than my two cents for an indie movie that comes out of Athens, Georgia. Even those that aren’t so good.  That being said, A Plague So Pleasant is more than good. It’s so – SO – pleasant. 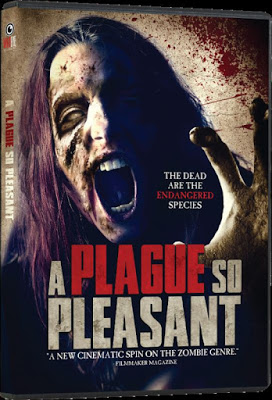 The movie opens with a voiceover information dump – I know, I know, bear with me – explaining what the zombie apocalypse was like. In a brief 12 hours the apocalypse came and went, leaving the well-prepared world a little less prepared for what would happen when they stopped shooting the zombies and the zombies stopped eating them. You see, in A Plague So Pleasant, the zombies are frightening – in as far as they exist – but outside of that, they are completely uninterested in the living.

In fact, they are more of a nuisance; shambling around and taking up space. And, because they are illegal to kill, their numbers keep growing because everyone is infected, so when they die, they just come back. Large swaths of land have been turned into zombie preservations, causing higher taxes and increased costs of living. What everyone thought was going to be a bloodied battle of survival turns out to be a bleak trudge through despair. 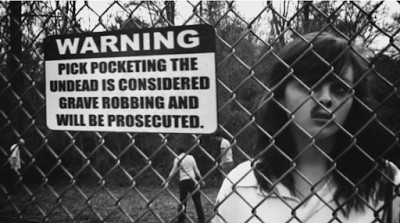 And, even though the movie opens with some skillfully filmed, black and white, Pi-esque, art film shots, it progresses into so much more than that. You trudge through life with the main character, Clay. Taking in his required survival courses; conversing with his manipulative roommate; and even visiting a preserve with his sister, Mia, who refuses to let go of the boyfriend-turned-zombie and the life they once had. Mia is a bright spot in Clay’s day to day actions, but her inability to accept the undead as truly gone is the final catalyst in Clay’s illegal reaction.

In an unexpected turn of events, the film bleeds color and turns from a grayscale study in life-after-undeath to a run-for-your-life-the-zombies-are-coming survival movie. A Plague So Pleasant quickly, and seamlessly, becomes something else entirely. And, while the movie never loses sight of the bleak post-apocalyptic landscape that it created, it immediately becomes the brutal, gory, kill-or-be-eaten zombie movie you look for. 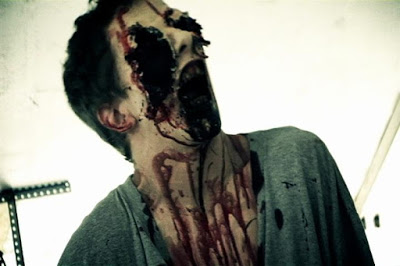 I believe that the future of the zombie sub-genre lies in indie films, and this one is a prime example. Filmed for around $3,000, with a teenage makeup effects artist, and a thousand extras, A Plague So Pleasant is a grand achievement – not only in imaginative storytelling, but in cinematography and script as well. And, I’m excited and proud that it came out of the place I call home – Athens, GA. In today’s indie film landscape the budgets are getting bigger – not a million dollars bigger – but bigger than what Benjamin Roberds and Jordan Reyes had to work with. It’s refreshing to come across a production that not only looks like a million bucks, but where the effects – from a self-taught teenager – are effective and the acting is superb.

Seriously, though, see this movie. It comes to DVD on August 25th.