If you close your eyes and imagine a post-apocalyptic world where you are a hardened survivor, fending off the undead with your trusted machete, Michelle, at every turn and generally being a lone badass, well, I want to hang out with you to compare survival plans – and maybe to rename your machete. 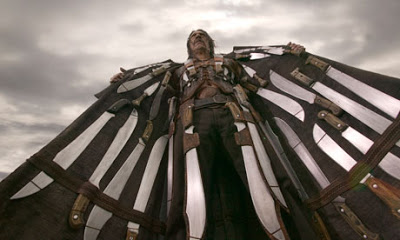 My sweet machete, how do I love thee? Let me slash the ways.

Sometimes these imaginary escapes, while hardly calming, are exactly what the doctor ordered just to keep you interested in the sub-genre you love. Other times they don’t have to be so imaginary.

Back in 2008 a zombie street-chase game – 2.8 Hours Later – was created by Slingshot, a UK based street game company, that put you right in the middle of a zombie apocalypse. While the idea piqued my interest, that’s as far as I ever got with it. Not just because I don’t live anywhere across the pond, but also because my ability to suspend my disbelief is only so refined. 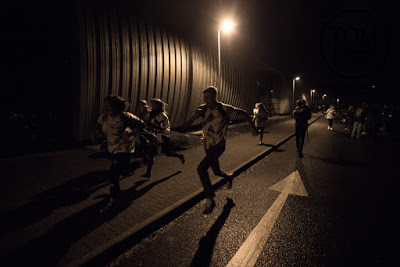 Feeling the adrenaline rush through your veins and pump through your brain would be pretty awesome, but it’s short lived when you realize that it’s only as immersive as you allow it to be – because distractions happen. How likely are you to stay afraid of something that you know you can ignore by popping into that Starbucks across the street?

This is the problem with these immersive street games. While perfect fodder for your zombie apocalypse preparation montage, they are just too easy to remind yourself they aren’t real.

Which brings me to this: Virtual. Reality. Zombies.

A few years ago, with the Oculus Rift at the forefront of virtual reality gaming headsets, the internet was abuzz with zombie survival games. Despite the fact that VR isn’t nearly as effective with the personal training montages – your physical immersion into the environment isn’t nearly as intensive – they definitely have a one up on the pro-longed fear factor.

Recently my news feed has been blowing up with information about Arizona Sunshine, a virtual reality zombie apocalypse game, coming to SteamVR with support for the HTC Vive(an alternative to the Oculus Rift). Despite my inability to play immersive games, I’m super excited about this. Virtual Reality, while just as fake as the street-games, doesn’t require you to suspend your disbelief – because it literally takes it over for you. 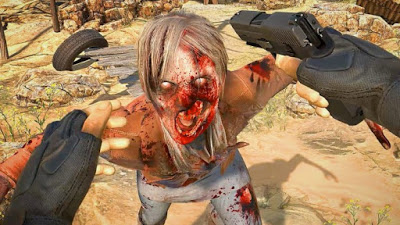 While the gameplay remains graphics based – which one could argue will take you out of the “reality” of the virtual reality – the fact remains that VR is using your brain in a way that you cannot while running through the streets being chased by actors. You may know, while strapped into a headset with a faceplate looking like Judge Dredd, that the zombie directly in front of you isn’t a real danger – but, will you side-step it or head-shot it anyway?

Have you ever tried NOT to duck from a 3D object flying at your head? Despite how ridiculous we all look with those glasses, we still put them on and let the matter take over our mind. I’m pretty sure the same will prove true with virtual reality zombie games; providing the player with a more complete, mental and emotional, zombie apocalypse experience – despite losing the more physical aspects of a real-life chase.

Sometimes the ridiculous is the terrifying.

Either way, with the onslaught of all things zombie in movies, television, and books, these immersive games seem like a fun way of 1.) Reminding fans why they enjoy the undead sub-genre 2.) Beefing up mental and physical health for zombie survival and 3.) Helping to determine the name of your weapon of choice – which is really the most important thing, right, Michelle?