Zombie Proofing 104: Your Car, A Tank

Zombie Proofing 104: Your Car, A Tank

I’m not entirely sure that when the zombie apocalypse is going to happen, but you can bet your ass I’ll have a sweet ride. Or at least, I’ll really really want a sweet ride. I’ll probably end up killing some poor infected and stealing their sweet ride. Because, let’s be honest, The Matrix – while a good girl – is definitely not suited up for zombie detail.

Which leads me to the fourth in the Zombie Honey Zombie Proofing series: 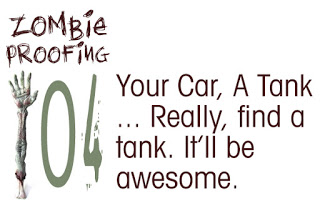 If zombie movies have taught us anything it’s that having an acceptable zombie-survival-vehicle is going to be key in … well… zombie survival. Mostly likely because we’re pretty sure the end-of-days-via-undead won’t end us up in some Mad Max gas-is-precious scenario. At least not right away. So, pick your poison and modify that baby until it has reached Dead Reckoning levels of awesome. If you can manage it – just get Dead Reckoning. I understand how that might be a difficult task, so I will settle for the badass apocalypse truck from Wyrmwood, The Beast. *added to wish list*

My pipe-dreams may be unattainable – even damned – so here’s some handy ideas for modifying your own ZSV. AND, as a bonus, there are some +/- ratings for Dead Reckoning and The Beast. Because I’m awesome like that.

Be reasonable.
I know, I know. There is NOTHING reasonable about Dead Reckoning, so why is this the first thing listed. Because, I’m ridiculous, not fucking insane. When you’re running away – and let’s face it, we’ll be running away – from hordes of the undead, you’re going to want a vehicle that doesn’t have a ton of miles on it, isn’t going to guzzle a shit ton of gas, OR topple over.

In the days of the living dead, after the shit hits the fan, you should be able to get hold of a new vehicle for little or no cost. Yes, I am totally telling you to steal a new car with minimal mileage. It’s an escape plan in the face of an apocalypse – just do it. And, since these days SUVs’ center of gravity isn’t so high that you run the risk of tipping over at the slightest angle, a truck, SUV, or midsize sedan is probably the way to go – as far as frame work. Even though the idea of tanking up the parents’ Winnebago seems rad as shit, it’s probably not the best idea.

I’m willing to admit the weight of armoring MIGHT keep those larger vehicles upright, but what about the gas suckage as it hauls around 2x it’s weight in metal, spikes, and badassness. You’re six of one, half dozen of another here. But I’m willing to be more safe than sorry, and a little less badass. Despite how much that last concession pains me.

Dead Reckoning -1. (This thing is HUGE. I probably won’t roll over, but it may not turn either.)
The Beast +1. (Nice little truck with easy modifications. Reasonable.)

Armor up.
Have you seen how strong zombies are? It’s ridiculous. Despite rotting flesh, deteriorating muscles, and rigamortis (if they’re fresh) – zombies destroy the shit out of everything. Their blind determination, persistence, and hordely weight can bring down even the best of boarded up doors and windows. So, metal is the way to go. Whether you reinforce the outside of your newly acquired ZSV with sheets of metal or, my personal favorite – a steel cage, make sure you armor that baby up. 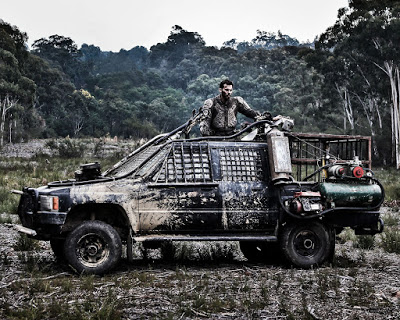 The goal here is to ensure that prying zombie hands, fingers, teeth, toes, etc cannot – and will not – breach your safe zone. So make sure you armor up the WHOLE of the vehicle. Protecting your windows is key, but so is protecting that soft metal between you and the outside world.

Dead Reckoning +1. (Essentially a giant armored tank. The whole thing. Even parts that didn’t need to be armored were armored. It’s beautiful.)
The Beast -1. (Those windows were nice and caged up with spikes, but what about the doors? Or the external gas container? Tsk.)

Weaponize.
By weaponize I don’t necessarily mean installing torpedoes on every side of your ZSV; although I’ll never say no to this idea. Weaponize your ZSV as best as you see fit. For me, I imagine I’ll want to make it difficult for zombies to get close and easy for me to take them out if necessary. A steel grid (as mentioned above) allows perfect cross points for spikes – although you may have to stop and clear them off after a while, no one likes zombie stuck-ons. Small, open ports for shooting through, will keep you safely inside while expertly head-shotting the shambling hordes. A cattle catcher on the front of your ZSV may not seem like a weapon, but it’ll do significant damage to head-on zombies AND it’ll clear up the road as you go. It’s a public service, really. 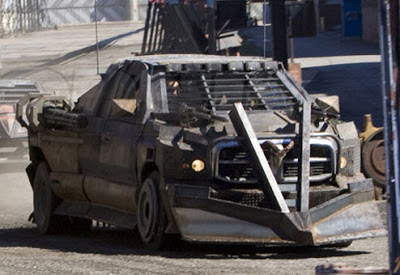 If you’re so inclined to weaponize in other ways that are a bit more dangerous for you, but look really fucking cool, might I suggest a flamethrower or three, mounted assault rifles, and razor wire? You know. Just in case.

Dead Reckoning +1. (Peep holes aplenty with guns galore. Plus, a cattle catcher that could easily be attached to the front of a fucking train. Score.)
The Beast +1. (Mounted guns and spikes. Simple works. It works!)

Make it cozy.
A cozy ZSV? Yes. Why? Because you’re going to be in there a while. I don’t know about you, but I like my sleep, and the idea that some undead bastards might keep me from sleeping is really upsetting. So, while I’m on the run, in my armored, weaponized, reasonable, apocalypse-proof Acura, I’m going to want to be able to get my beauty rest.

Now, assuming you’ve gone with a bigger vehicle like a truck, van or SUV, you can turn that way-back into a cozy camp with some bedding, pillows, battery powered lighting. Should you have hot-wired a midsize car for your ZSV, I recommend ripping out the back seats and using half the area to sleep tight, and half the area to store your goods. Nothing wrong with sliding your feet into the trunk and tucking yourself in. Nothing. And, if you went and got yourself a truck for the zombie-road ahead, might I recommend a bed cover for the back and port access via the cab. If a bed cover is unavailable, a sturdy steel cage with ample weaponry, tarps, and chicken wire will suffice. It’s the apocalypse, it’s okay if you have to rough it. It looks more awesome that way anyway. 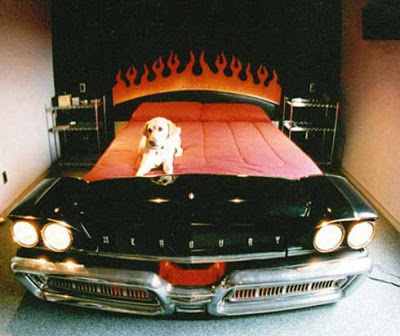 Dead Reckoning -1. (There’s plenty of room inside, but most of it was used up for surveillance, tech, and storing MORE guns. This is a +1 always, but it’s less than comfy for those long trips out of the city.)
The Beast -1 (While the cabin seemed relatively roomy, this vehicle was not made the long haul. The bed was caged in, but there were zombies in there. You don’t want to sleep with those.)

Traps and Alarms.
I wasn’t sure if this section would be necessary, but after the previous “make your ZSV a home” bit but, I think it might be – because how can you sleep tight if you’re constantly afraid of letting the zombies bite? Easy. Set some traps and alarms to wake you up should the doomed-dead get a little too close. Bells, windchimes, cans on strings. Whatever you have to set out that will tip you off to the tiptoeing brain-eaters. Trip wires would be incredibly useful if you have the ability to set them up quickly and hop back into your home-on-the road.

I’m actually a big fan of motion sensors to create a sound or a light that would both startle the creepy creepers and wake me up.

Dead Reckoning +1. (Surveillance everywhere. Motion sensors, video, automatic weapons. It’s self-sufficient. Dead Reckoning doesn’t need you.)
The Beast -1. (Aside from having more than one person in the vehicle – you only when zombies are near when you’re OUTSIDE of the SZV. A little beside the point, I think.) 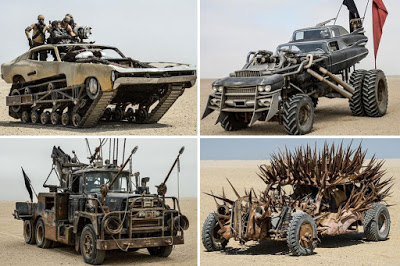 There ya have it. Some simple, but key ingredients, to making sure your vehicle is zombie proof. Remember – you’ll be traveling at high speeds in an attempt to get away from the undead – so, in theory, any vehicle can be used as a proper weapon. It’s just a matter of keeping it that. Wear and tear will be the ultimate ZSV killer to combat so, as with any vehicle, be sure to practice good maintenance.

And wear your seatbelt.

Zombie Honey Note: If you can find them in the sands of Australia, ANY vehicle from Mad Max Fury Road will more than suffice.