I grew up watching Scooby-Doo. 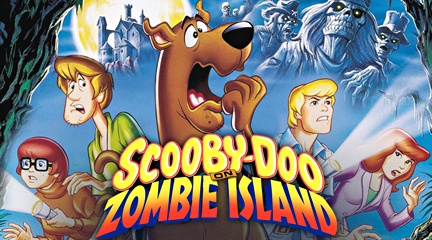 Mostly in reruns and revivals (Scooby-Doo! Mystery Incorporated) and direct-to-video gems like: Scooby-Doo on Zombie Island. Scooby-Doo is an institution, running mostly strong, since 1969. When the original series ended in 1975 the effort to breathe new life into it often fell a little short, a little over the top, and a whole lot bad (I’m looking at you Scrappy). Luckily for us, in 1998, Warner Bros. decided to inject new life into the Scooby Gang that not only ignored some tv mishaps (Dammit, I hate you, Scrappy) but was also really good.

The Scooby Gang has disbanded – fed up with years of chasing down ghosts, monsters, and other supernatural entities, only to find they were all just regular people in disguise. Now, Velma owns a mystery bookstore – because of course she does, Shaggy and Scooby are customs agents – mistakenly eating all the contraband food they can find, and Fred and Daphne run a successful television show – that Fred decides can reunite the gang. With high hopes of finding real ghosts in the bayous and cryptic manors of Louisiana, Mystery Inc. is reunited. 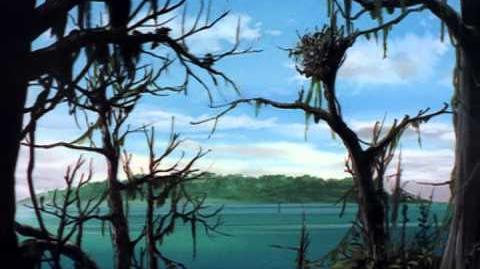 I do not want to go to there.

Invited to stay on Moonscar Island, which is supposedly haunted by the ghost of Morgan Moonscar, the gang head on down the bayou – skepticism, and typical Scooby shenanigans, not too far behind. Before too long the haunted goings on of the Island begin to manifest: ghosts in mirrors, an army of voodoo zombis, quicksand, bats and stale Scooby Snacks (the most horrifying thing of all, yes?) With a skeptical shadow hanging over the gang they begin to run their tests and ask their questions, believing they have been duped once again. Only this time the zombies are proving to be far more real than their previous encounters.

Zombie Island is a pretty fantastic jump back into the saddle for the Scooby Gang. With some smartly written dialogue – and self-aware humor – Zombie Island is like a happy, welcoming, nod to adults who watched the show as kids – while being friendly enough for younger viewers. The voice talent and animation is a step above what we ever got watching those meddling kids ruin evil deeds, and the story is darker and smarter. 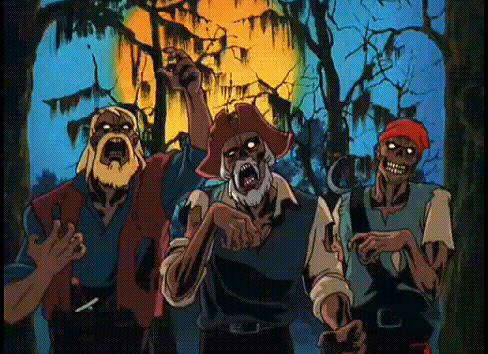 The meddler just found out that g-g-g-ghost pirates AND zombies are real. I think they’ve made up for lost time, yeah?

As the Gang begins to realize that what they are dealing with is the real thing you, the viewer, begin to put all of the pieces of the puzzle together. Years ago, a group of settlers, devoted to a cat God, were attacked by Moonscar’s pirates and forced into the bayou to be eaten by snakes and alligators. Two survivors beg for vengeance from their God, cursing the pirates, and turning the survivors into werecats who must drain life-forces every harvest moon to maintain their immortality. The victims reanimate every harvest as zombis to warn visitors away.

Did you take that journey with me?
Murderous Pirates.
Vindictive Werecats.
Harbinger Zombis.
Oh my. 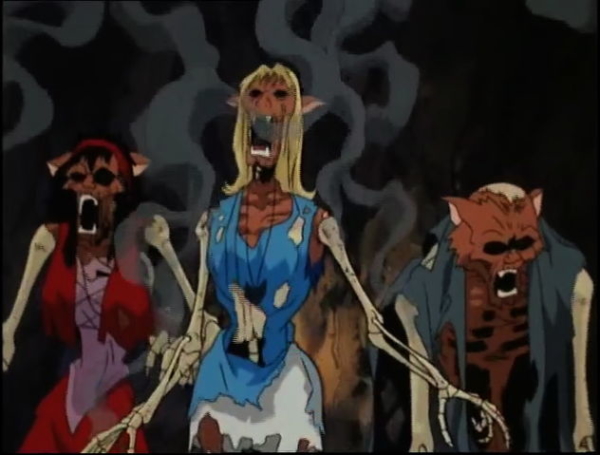 This isn’t your typical Saturday morning Scooby-Doo adventure. This isn’t even your typical Friday night horror movie extravaganza. Zombie Island went and upped the ante, AND they did it all without any old familiar characters (The Addams’, Dracula) or any new annoying ones (Scrappy, seriously, why do you exist?). If you’re a fan of Scooby-Doo, monsters, zombies, cartoons, and Velma (because, come on) you’ll enjoy Zombie Island. Or at least you should.