Hi, my name is Aaron and sometimes I’m a lazy bastard. I love playing games, experiencing the highs and lows, seeing how gameplay evolves, how characters develop, how worlds come together, exploding someone’s head in a shower of gore, and so on and so forth. But frankly, I can’t be bothered to actually play a lot of the games that are out there. Either because I can’t afford to buy them right now, because they’re not available anymore, they’re for a system I don’t own, because I have other games to play first, or whatever. Which brings up the idea of the “Let’s Play”. 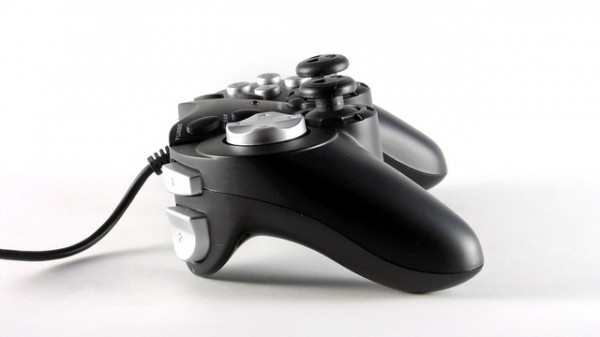 Though LPs seem to me to be ridiculously popular, it also seems that there a lot of people who have never even heard of them. So for those of you living under that particular gaming rock (I’m not judging, it looks cozy there), here’s a primer. A Let’s Play is a video or screenshot & text playthrough of a video game which generally includes commentary. The commentary might be trivia about the game, just a verbal explanation of what is going on in the game, stream-of-consciousness babbling, mockery of the game, or just about anything else.

At this point I imagine some people are asking what the hell is the point of just watching someone play a game like that. It’s not an unfair question, but one that has a lot of answers. The first is the commentary itself which, when done well, can add a lot to the game. A lot of people who do Let’s Plays are funny, charming, informative, or some combination of the three. It makes for a different experience than playing a game yourself. Even if you’ve played through a game before, watching a LP can be interesting because you get to see how someone else reacts to the same things you saw yourself.

The second answer is what I mentioned above in that first paragraph. Sometimes for whatever reason I don’t actually have these games or can’t play them, so the *only* way to experience them might be to watch someone else play through it. Older games, especially PC games, are often a nightmare to get working on a newer system and rather than punch myself in the nuts trying to make it work, I’ll just head over to YouTube thank you very much. 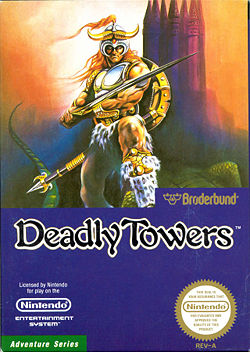 The last answer, for me anyway, is that a Let’s Play is a good way to find some enjoyment out of games that are known to be shitty or that are entirely outside of a genre that I want to play. You couldn’t pay me to play Daikatana or Overblood or Deadly Towers because they’re absolutely horrid, but watching someone else play through them can be really damned funny.  Similarly, I’m not a big fan of playing platformers or open-sandbox games because I’m generally not great at them, so I’d much prefer to sit back and let someone else do all the obnoxious and frustrating stuff for me. I can then just focus on personally playing games that are awesome.

So, you want some of these crazy LP things to try out? Good, I’ll point you on your way to a few different ones I’ve enjoyed before.

To start with, http://lparchive.org/ has a metric shitload** of different LPs of all sorts of styles and games. You’ll find brand new games along obscure games sitting next to old classics. I personally find the Narrative style found there quite often to be rather akin to torture, but there are lots of gems regardless. My favorites are the Ultima series as done by Nakar, Knights of the Old Republic 2 by Scorchy, and the Darkseed games by Slowbeef.

Moving over to Youtube, where it seems you’ll find the majority of Let’s Plays nowadays, you can’t go wrong with NintendoCapriSun at http://www.youtube.com/user/NintendoCapriSun. NCS is a really nice guy who is pretty funny and more than a little weird, but in an entertaining way. He nearly exclusively does Nintendo games, so there’s a lot of Mario and Zelda and Metroid to be found on his channel. My three favorite games from him are Mother 3, Super Mario Sunshine, and Metroid Prime.

Next is DeceasedCrab here http://www.youtube.com/user/DeceasedCrab, who at times is a bit polarizing due to his temperament in dealing with commenters and things he doesn’t like. DC does a lot of obscure and indie games, so he’s really good for watching games you might not have even heard of before. Your best bets with DC are his playthroughs of La-Mulana, the series starting with 5 Days A Stranger, and Cave Story.

For something a bit different, there’s Helloween4545 here at http://www.youtube.com/user/Helloween4545. Helloween does almost exclusively horror games, whether it’s survival horror or action horror or whatever, and generally makes it absolutely hilarious. My favorite games from him are Dead Space, Penumbra, and Dark Souls. 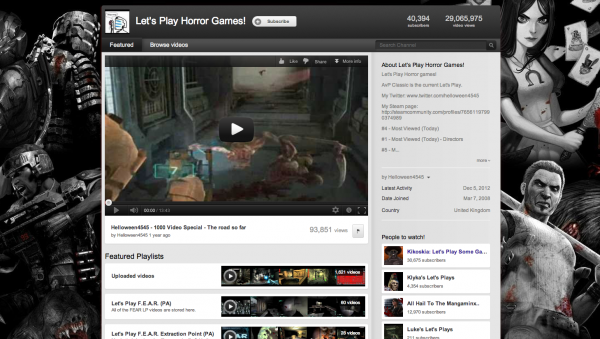 My last recommendation for now is Kikoskia at http://www.youtube.com/user/Kikoskia, who does one of the most eclectic variety of games for his channel as you can possibly imagine. Mostly old school adventure games, RPGs, first person shooters, as well as some absolutely atrocious games of all sorts. You owe it to yourself to watch his play of Overblood because that is just a fucking cringeworthy game. Otherwise, I highly recommend his Let’s Plays of Deus Ex, Discworld, and Birthright – The Gorgon’s Alliance.

That should give anybody new to the Let’s Play scene plenty to start with, but don’t stop there. There are a lot of incredibly fun and funny people out there making LPs for the entertainment of others and you should keep an eye out for them if you enjoy what you’ve seen so far or even make your own if that sounds good too.