When Bella Blitz asked me to contribute a column to Breed Geeks, I was truly thrown for a loop. For one, I did not fully embrace my own geekiness until years after I finished high school. I am sort of late to the geek game, although I did have a select few geeky interests as a child, such as fantasy novels and playing the violin. (Being in orchestra during middle school is the fast track to being called an “Orc-Dork” for the rest of your life, by the way.) More importantly than any of those points, is the fact that I have absolutely positively no plans to do any breeding. I love children and get along famously with them, but I have never wanted any of my own. As a child, while my friends were pushing their Cabbage Patch dolls around in strollers, I was taking my best friend (a stuffed monkey named Jane) on wilderness adventures in my backyard.

Despite the fact that I do not want children of my own, there is one child out there in the world whose development I do have a somewhat vested interest in. As weird as it is to ponder the reality that my little sister is a parent, I have in-fact become an Aunt. Aunt Sarah that is, to a now three year-old boy named Logan. While my sister is in charge of teaching my nephew manners and to have beautiful compassion for the world and my brother-in-law is in charge of teaching my nephew to play football and obsess about NASCAR, my responsibilities seem to have fallen to teaching my nephew how to embrace the geekier side of life. 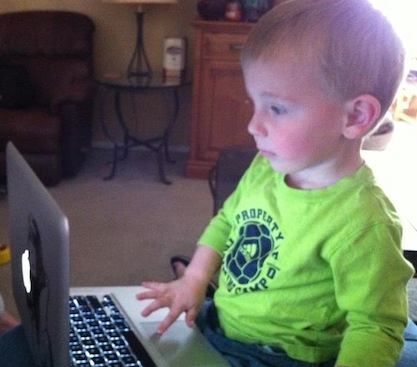 (Logan geeking it up on my MacBook.)

Between episodes of Mickey Mouse Clubhouse and twenty-minute tickle fights, Logan and I usually settle down with a book or my iPad. He is already a talented little gamer, committing expert slayage in Plants vs. Zombies and beating levels in Angry Birds I couldn’t even defeat. We have read a little poetry and while Shakespeare is a bit over his head, Shel Silverstein is right up his alley if I can get him to sit still for a page or two of “Where the Sidewalk Ends”.

Toddlers are so full of energy and excitement that it is very often hard to get one to sit still long enough to get very interested in anything. Because of that, it was not until a couple of weeks ago that I won my first victory in the battle to turn my nephew into a geek. It is no secret that I am a fan of the Avengers and its prequels and it is an even less-hidden secret that my Viking-descended mother is obsessed with the movie Thor. We had been trying to get my sister to watch it for ages, but she and her husband both tend to shun comic book films. It took my mother’s hearty (and somewhat creepy) endorsement of Chris Hemsworth’s abs to finally convince my sister to sit and watch it with us.

While we were watching Thor, my nephew was doing his usual rotation of playing with each of his toys for five minutes and running laps around the living room. (Sometimes, it’s exhausting just to watch him.) We weren’t paying much attention to what he was doing other than to make sure he wasn’t going to cause himself life-threatening harm. So, it was a surprise to all of us when in the middle of a lap around the room he suddenly went rigid and stopped stock still in his tracks, made a loud buzzing sound with his lips and fell over on his back.

We were all concerned for a moment, until he fell into a fit of giggles and stood up to do it all over again. That moment was my first geek victory once I realized that he wasn’t just doing random kid stuff; he was imitating Thor getting tasered by Darcy. Repeatedly. For the rest of the movie Logan sat relatively still watching the epic story of Asgard and Earth play out on the TV, laughing at the funny parts and even shouting “Oh no!” when Thor was felled by the Destroyer.

The next time he came to visit, Logan spotted my Loki action figure on my desk and exclaimed, “That’s the funny guy! A good guy!” When I brought up a photo of Thor on my laptop he growled, “That’s the fight guy!” While I am unsure what version of the film is imprinted in his young mind with Thor and Loki cast as such, he did eventually come to the conclusion that each of them are good guys in their own way. (This brings a tear of pride to my villain-sympathizing eye.)

(The Fight Guy and The Funny Guy)

This little boy is now more obsessed with Loki than the average teenaged Hiddlestoner, so I decided to show him the skit Tom Hiddleston did with Josh Horowitz for MTV. Now my nephew asks to see “the funny guy” at least once an hour whenever he comes to visit. And every now and then he will stop what he is doing and shout “LOKI’D!” at the top of his lungs with the most pleased and mischievous grin on his face.

That’s right. I’m creating a geek. If his dad has his way, he will end up quarterback of the football team. But if I have my way, after football practice he will read comics and fantasize about being a superhero when he grows up.