One of my personal favorite TV shows of all time is easily the British Channel 4 sitcom The IT Crowd. Far better than any show about nerds has any right to be, it follows IT workers Roy Trenneman (Chris O’Dowd) and Maurice Moss (Richard Ayoade), who work in the basement of a large skyscraper. When Reynholm Industries hires computer-illiterate Jen Barber (Katherine Parkinson) to supervise them, it sets off a series of bizarre and hilarious adventures as Jen tries to learn about computers and Roy and Moss try desperately to be “normal”. The following is a list of my five favorite episodes of the show, written and directed by comedy genius Graham Linehan.

One of the first series’ episodes is one of the first ones I fell in love with. Not only does it introduce one of the funniest occasionally recurring gags in the series (the emergency number), it’s an example of everything going to hell and back in a matter of minutes. There’s two plotlines: Jen wants a pair of shoes that don’t fit, and company boss Denholm Reynholm (Chris Morris – the guy who created that Blue Jam show!) threatens to fire anyone experiencing stress at the end of the day. This, plus Moss starting a fire by mistake, brings on one of my favorite bits of three plotlines converging all at once to hilarious effect. 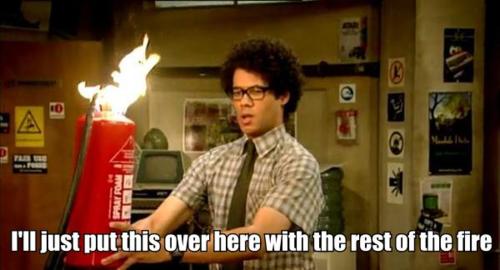 This was voted the fan favorite episode of the series a while back, and for good reason. Jen is asked to go to a musical with a work friend, and Moss and Roy invite themselves along while also suspecting that this friend might not be straight. When they actually get to the theater, the fun really begins. You get to see part of the best worst musical ever, and then when Moss and Roy both try to use the public toilets, they end up fucking up spectacularly and putting themselves in a more and more hopeless situation. Hilariously hopeless. (I’m purposefully not putting anything about the actual musical, because one of the big laughs is finding out what it is.)

After a sexual harassment scandal in an earlier episode, new CEO Douglas is forced to pay Roy, Moss, and Jen some money, and forced to wear a pair of pants that shock him every time he’s aroused. Jen goes to an interview at another company to try to break away from the same-old same-old, and Moss and Roy have an interaction that leaves both of them in a pretty bad state (you can see it below). Watching everything slowly fall apart is always a great part about this show, especially Roy’s social issues when he gets kicked out of the office and can’t get back into the building.

Pretty simple setup: Jen gets Employee of the Month, and has to make a speech about IT, but doesn’t know a damn thing about computers. (or COMP-uters.) She convinces Moss and Roy to help her, and the two decide to pull a massive prank on her to bring her back down to earth. Meanwhile, CEO Douglas starts dating a woman he falls in love with, but this woman has a bit of a secret. Another example of two plotlines converging spectacularly and explosively, plus the entire scene with The Internet never doesn’t kill me.

It’s great to see that even four seasons in, The IT Crowd is still able to stay true to its roots. In this lovely episode, Moss and Roy decide to skip work, while Roy has a standing bet with Jen to see how long he can go without saying his catchphrase, “Have you tried turning it off and on again?” Framed by Moss telling the story of his day to a class of children in a “scared straight” program, seeing Roy and Moss trying to act like juvenile delinquents – especially while being middle-aged – is fucking hilarious. But the show isn’t often NOT funny, anyway. 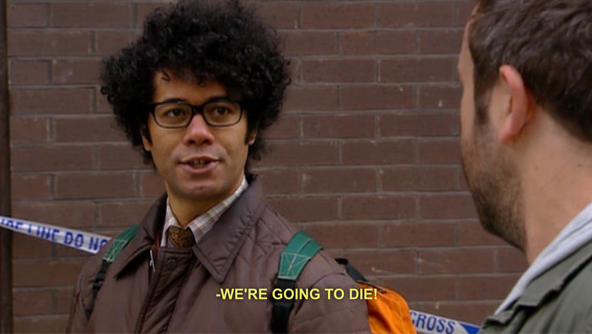 “What operating system does it use?” “It’s, uh…Vista!”

The IT Crowd is currently available on Netflix to stream, and there are clips of it all over the Internet. So you really have no excuse not to watch it.