This particular article also falls under the category of Blitzholm Syndrome… 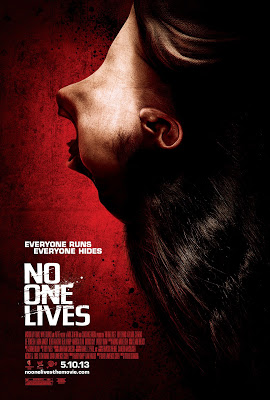 I really should change my clothes before writing this review, but let me just be honest here – I’m not wearing any clothes.

It is no secret that I get a roaring lady boner for dominant psychopaths, sociopaths, and the glorious violence that they inflict within film. It makes me weak in the knees, truly. And seeing as how it’s Hexmas, the pickings were ripe with wobble-inducing cinema for me to drool over and share with you. For my second Hexmas review I chose No One Lives. Which really should just be titled: No Bella Can Stand After Watching This Movie. I’m getting flustered just writing this ridiculous introduction. Why didn’t I just throw my panties at the screen and call it a day?

No One Lives starts off a little smarter than most slasher flicks. Sure, there’s a blonde girl running through the woods screaming her head off – as though screaming would actually propel her away from her attacker faster – however, she doesn’t fall; she runs straight forward; and when she jumps into a pile of glass, she wraps up her foot and keeps on running. When she is ultimately caught, she uses the glass from her foot injury to carve her name into a tree – so’s the detectives don’t have too much detecting to do… we know how useless they are in slashers anyway. Right the fuck on. I like you first-final-girl.

I dig this opening shot because it confuses you for a chunk of the film. Is this the end in the beginning? Are they coming back to it? Where are her pants? 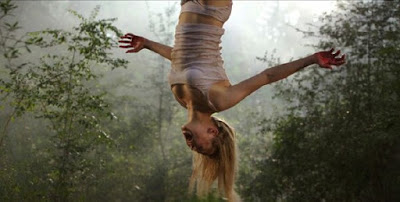 The movie then jumps right into meeting a young couple on a road trip, aka: the victims. After some awkward interaction, and exposition, about feelings and apologies we are thrust (this is even punnier when you know there’s a sex scene happening) into a confrontation that really sets the stage for who we are dealing with. The bad guys here are the ones that annoy the shit out of me. Loud and in your face about how bad they are. The peripheral characters sigh and retreat so you know you should be afeared of them. I hate that. But, what No One Lives does spectacularly well is clue you in to the fact that, yes, these are the “bad” guys – but this guy, this is the worst guy – and these are not the victims we were looking for.

But, baddies will attempt to be bad and the couple is kidnapped. Despite the biggest baddie not actually wanting to harm anyone, the young girl – much to the Driver’s dismay – takes her life on his blade. This, of course, sends the Driver into a calm and collected rage wherein he escapes his handcuffs, and without wasting movement or energy, kills the big bad… but not before leaning in and whispering “Handcuffs? That was your first mistake…”

A quick cut to the group of baddies shows Flynn, the loudest of them all, digging through the not-victims’ trunk only to find a girl stowed within the vehicle. And lo, it’s the mostly naked girl from the beginning of the movie. Still sans pants. Up until this point No One Lives was a very tight movie without using many slasher tropes, or relying on any real slasher stereotypes. But, alas, with any horror movie, someone has to be there to lay the plot out for you. That is what this girl is for. Complete with some flashbacks, some backhands, and a little bit of hysteria we learn just what these bad guys are up against. However, we also get to see this girls end-goal. Her cool, calm, and collected rage is as in check as the Driver’s – which makes using her as a plot definer a bit more unique.

The girl proves to be quite the harbinger, as we find out in one of my most favorite moments of “hidden” identity since Silence of the Lambs. When you’re a cool, calculating, psychopath who is determined to destroy everyone that has interfered with your life, what else do you do with a massive big bad than STOW. AWAY. INSIDE. HIS. BODY and wait for your opportunity to kill, kill, kill? The slow realization that the Driver has scooped out the interior of a body and sewed himself inside it isn’t actually slow at all. But it’s such an amazing “are you fucking serious” moment that it sits with you for a while as you process it. And, just as you are done processing it, the Driver (who is played by Luke Evans, by the way) rips his way out of the body, and with blood dripping down his determined face, looks dead into the camera. Was he looking at you? No, he was looking at me.

At this point in my review, I should take a break to mop my sweaty brow, but I will carry on.

Slasher movies that rely heavily on Rube Goldberg style mechanics tickle me, and No One Lives is absolutely no exception. Despite the Driver’s traps being slightly less mechanical they are far from less maniacal. The culling of the big bads continue and the Girl? She waits. Having already proclaimed her goal to escape as he kills them all. She is wise, that one. What follows includes an arrow attached to a line, a drop in a woodchipper, a weighted shotgun blast, face mangling, and a shower curtain strangulation complete with boobies – if you need that sort of thing as a side dish to the violence.

I am always a loud cheerleader for a boob shot, unnecessary or otherwise, but in this case, I really didn’t need anything but the Driver’s sheer determination. And, as he kills his way towards his prized pantsless-girl-from-the-woods, his calm becomes zen-like. Quite literally putting me under his spell, despite the horrors I know he’d dish out. I don’t even care about safe words at this point. 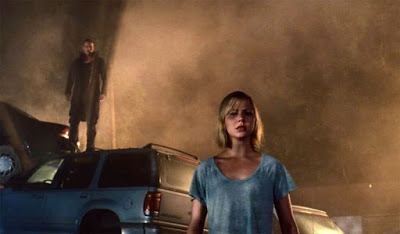 The relationship between the Driver and the Girl becomes more clear as you learn – even in a snippet of flashback – what he’s done to her and what they’ve been through. When they come together, in what you believe for a moment, will be the final “battle” it’s like watching sex through violence. She wants to be the one to kill him, and he, in his psychopathy, tells her to do so. When she fails – and this is where No One Lives briefly snaps me out of my hyperventilating heap – because the gun isn’t loaded (silly girl, guns are for boys *head/desk*), it only takes a moment before the Driver is back in control, and I’m back looking for my panties.

For a split second there is a very real embrace where we get to witness the Driver feel something other than determined, quiet, rage. He cuts a tracking device out of the girl, setting her free, just before taking a shotgun to the head of the last, and loudest, of the baddies. But that’s not all. As quickly as the screen cuts to black, it cuts back to film where we see the Driver making his way through a hospital to kill the mangled face baddie with a fucking clipboard… but not before whispering “No one lives.”

Ohhhh, I see what you did there.

The end scene sees the Driver come in very close contact with his freed girl-from-the-woods, as he takes one last opportunity to touch her and take control, before walking away like a fucking boss.

I’m literally out of breath. No One Lives gives me a case of Blitzholm Syndrome unlike any I’ve experienced before. I get gore and guts, emotional destruction, and glorious violence. Why am I not hitting play again already? Why do I not have a sequel? And why am I sweaty and nude?