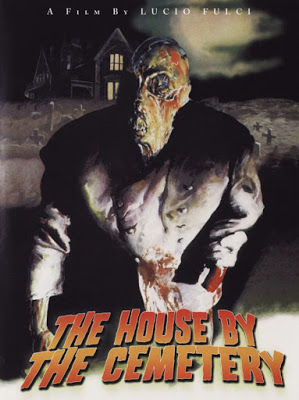 Sometimes, I think that’s all you really need when reviewing a Fulci movie. Those two words create a very nicely packaged review of pretty much anything he’s done. But, alas, those two words are hardly enough for the awesome that is the Horror Honeys, so here I go.

With it being a very Slasher Hexmas, next on my list is The House by the Cemetery. I admit, I have to work myself up for watching a Fulci film. It’s not that I don’t enjoy them – I typically do – but sometimes it’s a measure in patience and discipline that I characteristically lack. The House by the Cemetery is definitely one film that I won’t be jumping the gun to watch again – at least not in short order. And, it’s not because it’s bad.

The final instalment in the unofficial Gates of Hell trilogy, The House by the Cemetery tells the tale of Norman – a researcher taking over his colleague’s project after having committed a murder/suicide in his place of residence. The movie unfolds through flashbacks and Norman’s research – as well as through his wife and son’s point of view. In typical Fulci fashion, there is another point of view – that of the evil within the locale of the mysterious murders: the New England home now occupied by Norman and his family.

There are a few things you come to expect from a Fulci movie, and The House by the Cemetery delivers on all of them in pretty good working order.

Granted, this checklist does not always a good movie make (seriously, how fucked up is that turn of phrase). The acting is more or less (definitely more) atrocious and the story doesn’t quite know what it wants to be from the get go. Is it a haunted house? Is it a haunted photo? Is it a haunted child? Haunted children? … Fuck it, let’s use all of the haunts.

Also, despite the flashbacks and the weird throw-away reasoning later in the film, we’re never really let in the loop about why Dr. Freudstein (yeah, take that naming journey with me) is perpetually haunting the house. It’s not even really haunting, he’s a fucking zombie, guys; keeping himself alive by eating his victims. But he’s hardly ALIVE. He looks mostly like a melted candle. Which is pretty fucking cool and super creepy when finally revealed.

Back to my point, though. We are never really clued into WHY- and I like to know these things. Did he kill his family? If so, why did he do that? Why is he buried in the house, but his family is buried in the cemetery by the house (oh, I see what you did there movie title). And, let’s talk about the family buried in the cemetery by the house. The creepy red-haired child who warns the creepy blonde-haired child not to go into the house, she’s dead – but what purpose does she server other than just being a creepy kid in a horror movie? Also, who is that with her? Her governess? Her mother? Was the evil babysitter a catalyst for anything, or just Dr. Freudstein’s maid? What was up with that creepy librarian?

By the end, I was kinda making up my own story that was a prequel for The Turn of the Screw.

Even with all of the unanswered questions and bizarre non-essential characters and plot forwarders – the fun thing for me about The House by the Cemetery was seeing the callbacks to other horror movies made around that time. There is absolutely no denying the influence of visual effects taken from The Shining along with some visual and character beats lifted right out of The Amityville Horror.

All in all this movie delivers the slashes and the rest is just icing on the weird, gooey Fulci cake.

And now I want cake. 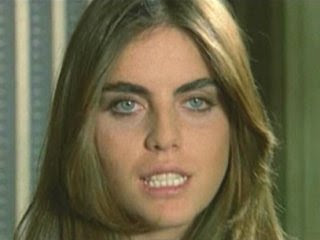 ZOMBIE HONEY RATING: 2 out of 2 creepy kids is still 2 too many
+ .5 for evil eyebrows, they were on “fleek” – is that what the kids these days are saying?