SIX OF THE WORST… ways to “enhance” your email signature

My day job is in a corporate environment, and as such I see a lot of email signatures. A lot of really large email signatures. They contain information that’s easy to get, or images that are unnecessary, or disclaimer text, or amusing quotes… all of which bloat typically-short email messages.

For comparison, here’s the signature I’ve had for the past eight years:

Josh Roseman | My Title, My Division, My Company Name | My Work Phone Number

It usually fits on one line.

Now, to be fair, I used to add all of those things, but what’s the point? No one I work with needs them. And, except in certain special cases, neither does anyone you work with either. So, to help you out, here are six of the worst ways you can “enhance” your email signature: 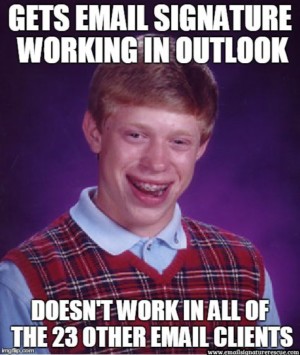 6. Adding company logos. — I recently received an e-mail from someone I’m working with. It was three paragraphs long, plus a signature containing three largish logos and three lines of text. Not only is the signature literally the same height as the content, but the email has ballooned in size from about 30k to about 60k. That increases the amount of time it takes to download — not by much, but every little bit helps — and the amount of space it takes up in your inbox. Don’t do it. Nobody cares.

The Exception to The Rule: There really is no good reason to put images of any kind in your email signature, but if you must, make it small — no taller than two lines of text. I used to work for a company that mandated we use a specific image, to the point that they set up a global signature and force-added it to everyone’s Google for Business email account, and it was about 50k on its own, but at least it wasn’t a very physically-large image. 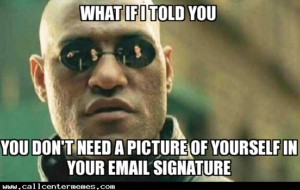 5. Adding addresses and/or fax numbers. — Why does it matter where your physical office is — especially if you work from home sometimes? What do you gain by putting a mailing address on your email signature? Do you get a lot of mail at work? I don’t — and any mail I do get is interoffice memos. Even ones from other offices make it here just fine because they all go in one big box and are delivered from office to office. And no one is going to fax you anything, not when they can scan and email it. Hell, if you don’t have a scanner, take a damn picture of the document and send it that way.

The Exception to The Rule: If you do work in a field where you need to receive a lot of postal mail, or if your business specifically requires you to receive faxes, obviously it’s a good idea to put that information in your signature. However, given that people don’t read things anyway, I guarantee you’ll be giving people that information countless times despite making it clearly visible in your signature. 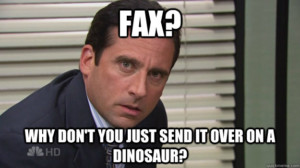 4. Adding your cell number. — What reason could you possibly have for doing this? If you’re putting your cell number on your email, you’re probably smart enough to be checking your email on your phone, so people trying to contact you have already made your phone vibrate and/or make an amusing* honking or dinging noise. Once people have your cell number, they’ll just call or text you instead of sending an email, and trust me, for business purposes you want everything in writing.

The Exception to The Rule: On-call employees, such as IT staff, need to put their cell numbers in their email addresses. It could still backfire, but it is unfortunately necessary. Salespeople also do this because it’s much easier to convince someone to buy something by talking to them rather than by sending them textual communication. 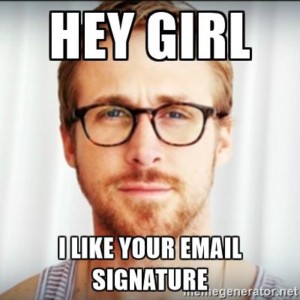 3. Adding “please consider the environment before printing this email”. — Thankfully, people have gotten better about printing things, and fewer emails are being printed just for the sake of having them printed. But when has that message ever made you stop and say, “y’know, maybe I shouldn’t print this email, even though I was totally going to”? I guarantee the answer is “never”. Stop doing this. It’s just a way to make people think you care about the environment without having to actually take any action.

The Exception to The Rule: There is none. However, given that I once had to print over 1000 individual one-page emails to hand to an administrative assistant to input into another system because she wasn’t capable of multitasking between screens, I can see why people would want to add it. 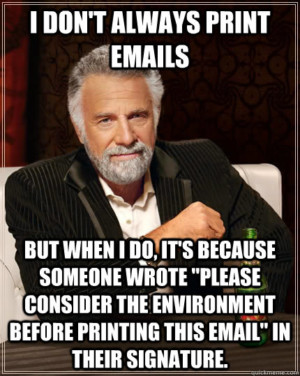 2. Adding disclaimers. — I’ve gotten plenty of emails that have a one- or two-paragraph disclaimer at the bottom that basically says “if you received this email by mistake, delete it and tell the person who sent it and then clear your cookies and empty your trash”. Which no one is going to do. They might hit delete (or archive, if it’s Gmail/G4B), but that’s it. They’re not going to “shred” your document just because you say so. Putting this crap on your email doesn’t accomplish anything. Trust me.

The Exception to The Rule: When your legal department forces you to add a disclaimer, you add it. Otherwise, don’t bother. No one will read it, and it just adds more bloat to your email messages.

1. Adding quotes or Bible verses. — I admit it: I used to add quotes to my emails. Most of them are archived here if you want to read them. And I’m sure some people have a list of Bible verses that they swap in and out from time to time. But here’s the thing: we take in so much information each day via our screens that we unconsciously train ourselves to ignore extraneous information. Eye tracking studies have shown exactly what people look at, and I guarantee no one reads far enough down on an email signature to get to your amusing quote or Bible verse. Don’t waste your time trying to find a good one, and don’t expect people to ever see it or be impacted by it. It’s 100 percent unnecessary and probably 99 percent unseen.

The Exception to The Rule: If you work in a religion-based field, I guess it’s okay to put a Bible/Torah/Quran/Tripitaka verse. But only then. Honestly, when someone puts a Bible verse (it’s almost always the Christian Bible) on an email signature, they go down a few points in my estimation. 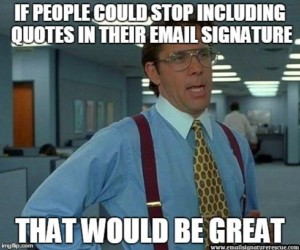 People have been sending emails from their phones for a decade now. Sending from a phone is no longer an excuse for bad spelling, bad grammar, nonexistent proofreading, or clipped or informal tone. Emails written on your phone should be just as professional-sounding as ones you typed on your keyboard. So stop putting apologies for being on a mobile device in your mobile email signature. You have no excuse.

You also have no excuse for leaving your phone’s generic advertising signature in your email app. If your mobile-sent emails end with “Sent from my iPhone” — or, worse, “Sent from my LG G4 on AT&T Wireless” — that just tells me you’re either too lazy to get rid of it or not smart enough to figure out how. Either thing is bad. 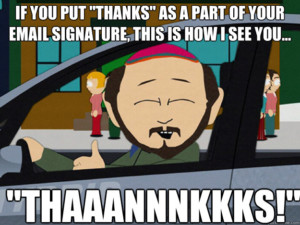 I actually have several personal email signatures, and yes, I break my own rules in some of them.

Normally, when I finish writing an email on my phone, my keyboard suggests I put my name, which is usually how I sign things. However, sometimes I need to put my phone number (when I’m talking to my daughter’s teachers), so that sometimes goes on the next line. When job-hunting, I sign my name and then put my LinkedIn address on the line after that.

But it’s when I’m sending out emails as a writer that I really mess it up.

Here’s my main signature for emailing publishers, editors, and reviewers:

It’s still small, but it has contact information in it that could be found on the internet by googling. The thing is, as a writer, you learn quickly that unless you’re already famous people aren’t going to google you so you need to give them some hints.

When I’m writing under my pseudonym, I have two different signatures. They both contain a quote from a review of one of my books, as well as URLs to all three and my twitter and website; only the first line changes — to publishers and editors I use my real name and then “(writing as Pseudonym)”; to everyone else, I only use my pseudonym.

Sometimes you have to break the rules, even though you end up hating yourself for it. 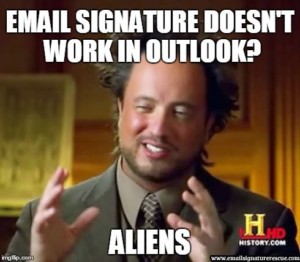 * It’s not amusing. At all. Turn off your phone sounds.