SIX OF THE WORST… things about the new Wonder Woman movie

Buckle up, nerds, because I’m about to shatter your illusions about the “awesome” new Wonder Woman movie that hit theaters last week.

There will be spoilers aplenty. If you haven’t seen the film and don’t want to know what happens, save this column for later.

And just so you know — I think this was a good movie. Not great, not amazing, just… good. I enjoyed myself for two hours and 13 minutes (there were no post-credit scenes so I left after the title card). But I wasn’t as blown-away by the film as so many people are saying on the internet that they were.

Here’s six of the worst things about the new Wonder Woman film: 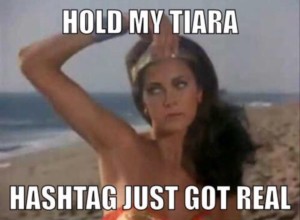 6. There’s no perception of danger for the main character. — WW takes place mostly in 1918, toward the end of World War I. However, we’ve seen Diana in Batman v Superman: They’re Friends Now Because Both Their Moms Are Named Martha, we know that she will not die, or even be seriously injured in such a way that she can’t recover. I think this was actually handled somewhat well in that we saw Diana’s training via montage, but we still know she’s going to be okay.

It’s not just Wonder Woman… As with all the rest of the upcoming superhero films, we all know there’s no real danger to most of the main cast. Thor will survive Ragnarok because he’s in Infinity War. All of the Justice League will survive their film because their solo movies already have release dates. I know you’re supposed to suspend your disbelief and engross yourself in the film, but that Justice League trailer just made me think about how small the repercussions of any superhero film can be these days. 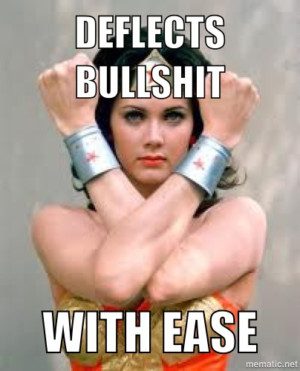 5. The female villain got no backstory. — What do we know about Dr. Poison? She’s a brilliant chemist who had some sort of damaging injury to her face and wears an articulated mask. That’s it. Elena Anaya did what she could with the material she was given, but for a movie that supposedly is all about women, one would think there could have been a way to make her a stronger villain. I just didn’t feel anything for her one way or the other. (Maybe that’s because I figured out the main villain about an hour into the film, but still.)

It’s not just Wonder Woman… For a movie with a lot of women in it, we really didn’t learn a lot about the non-main characters. Other than Diana, and to a lesser extent Dr. Poison, the female characters slotted into pretty stereotypical characterizations — the mother/queen who doesn’t listen to her daughter because she thinks knows what’s best, the warrior woman who pushes the protagonist to be better than she is, the unnamed collection of Amazons who have no real characterization other than “really good at fighting”, and the plucky secretary type who is more than just a secretary when she needs to be. I know it’s just a two-hour movie, but it is possible to give more backstory to the more-important characters. 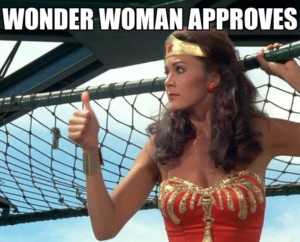 4. It was kind of a sausage-fest. — Once Diana and Steve left Themyscira, there were very few women with speaking roles — or at all. I know it was set in 1918 and there weren’t a lot of women in positions of power in England (and even fewer on the battlefield, unless they were pulling a Mulan), but Diana, Dr. Poison, and Etta (and Lucy Davis was frumped-up for the role so to not distract from Gal Gadot’s appearance, I bet) were pretty much it. And, by the way, those sausages all got a lot of backstory — Samir wanted to be an actor, Charlie was a singer who had what looked like PTSD, and the Chief was a Native American who had lost his home due to American expansionism but had come to terms with his friendship with Steve.

It’s not just Wonder Woman… The Justice League is Superman, Batman, Aquaman, Cyborg, the Flash, and Wonder Woman. DC has plenty of female superheroes, even if they’re not as well-known — Supergirl, Black Canary, Power Girl, Hawkgirl, Batgirl, Oracle, Zatanna, Catwoman, Miss Martian, and even Harley Quinn to some extent. The Avengers are Captain America, Iron Man, Thor, Hulk, Hawkeye, and Black Widow, and the extended group includes Winter Soldier, Falcon, War Machine, Black Panther, Vision, Scarlet Witch, Ant-Man, and perhaps Spider-Man. But there are other women in the Marvel universe who have powers, even if you ignore the X-Men and the Defenders. Squirrel Girl is enjoying a resurgence, as is Ms Marvel, and we also have She-Hulk, Wasp, and Captain Marvel (who somehow has the same last name as Supergirl). The original Guardians of the Galaxy in the first film had one woman — Gamora — but are now up to two since it appears Mantis is going to join them. Only the X-Men films seem to even consider aiming for a reasonable male/female split, and even then the original one only really had Rogue and Storm. 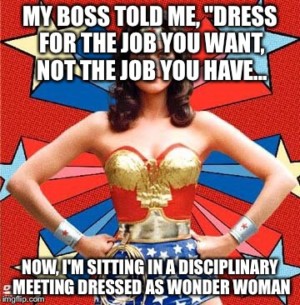 3. We already know who Wonder Woman is. — Because of Diana’s characterization in Batman v Superman: We Basically Just Wasted the “Life and Death of Superman Storyline”, we know exactly who she is: she’s a pragmatist, extremely intelligent, a talented fighter, and pretty damn powerful. Why do we care how she got there? Every superhero seems to get an origin story these days, and now that we have these team-up movies it sometimes comes after their first appearance (looking at you, Spider-Man: Homecoming).

It’s not just Wonder Woman… Annoyingly, we never seem to get the origin stories we want. I would like to have seen how Rocket and Groot met up, or what it’s like when you’re on a whole planet full of people like Drax, or what made Poe Dameron the great pilot that he is, or what Chewbacca’s life was like before he helped Yoda escape the Jedi purge in Revenge of the Sith. Or we get all the origin stories, like in Suicide Squad (although I note that we glossed over Killer Croc in favor of Deadshot, Harley Quinn, Katana, and Diablo — though to be fair I really liked Diablo’s character). These origin stories get crammed into other movies or delivered as a few sentences of exposition because we have other characters we’re supposed to pay more attention to. 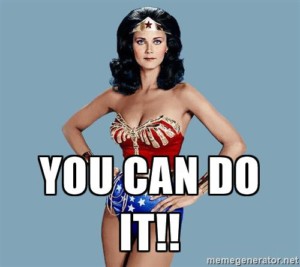 2. It felt really, really long. — Wonder Woman was about 130 minutes, if you cut off the logos at the front and the credits at the back. That’s a lot of movie, and there were chunks in the middle that just weren’t interesting. It is possible to make slow, quiet character development moments compelling and engrossing, but I just didn’t care when they were dancing in the snow, and I wasn’t amused by the “find Diana some ‘appropriate’ clothing” scene, and all the stuff in the trenches was just “time for a big action set-piece”. I could see where the writers, editors, and director tried to tighten up the pacing, but because there was so much story it just seemed to drag sometimes. Even Diana’s climactic moment, where she had to understand that sometimes humanity is bad just because that’s how they are took forever.

It’s not just Wonder Woman… The muddled middle is becoming a larger and larger issue with superhero films. I’ll give Suicide Squad credit in that I didn’t feel it when I saw that one, but Guardians of the Galaxy 2 had it, Captain America: Civil War had it, and even non-genre films I really liked — Match and Rocky for example — had it. There’s a difference between slowing the pacing so the viewers can catch their breath and letting it go on so long that the viewers’ minds start to wander. Wonder Woman wasn’t as bad, but it was still there. 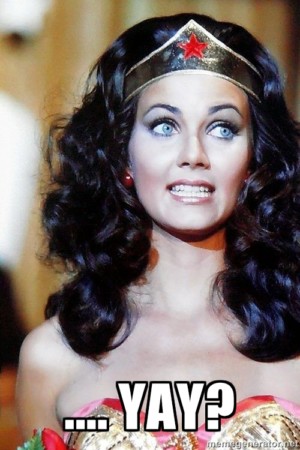 1. Only a god can kill another god. — First of all, was there any doubt in anyone’s mind that Ludendorff wasn’t Ares? I figured out it was Sir Patrick right about when he forbade Steve from going into Belgium. But beyond that — Ares specifically told Diana “only a god can kill another god”. That basically means Diana is safe from literally anything in the DC movie universe except for gods. Which probably doesn’t include Superman, especially when he is used as a Jesus metaphor. So, really, it doesn’t matter what Justice League throws at Diana; she’ll be fine. Maybe that’s why characters like Batman, Green Arrow, and the Flash are so popular — they can die from normal human things like heart attacks or aneurysms. If you make your main characters pretty much invincible, then where are the stakes, and why should we care.

It’s not just Wonder Woman… One other thing — once you have the super-ability, you have to keep using it. In this film, Diana had the power to kill a god. Why didn’t she use that power in Batman v Superman: Let’s Jarringly Drop In Some Justice League References? I’m sure she won’t use it in Justice League, either. The same thing happens in other properties; McCoy cured death in Into Darkness, the EMP is almost never used in The Matrixseries, and on Supernatural Bobby figured out how to forge new bullets for the Colt but it seems to never make an appearance when it could be really useful. So, Diana… are you going to use your superweapon again?

After all this complaining, you’d think I didn’t like the film. But I did. It was an enjoyable way to spend a couple of hours. I laughed. I liked the action sequences. I almost felt a twinge when Steve sacrificed himself (but holy crap did it take a long time with the camera on his face before he actually did it). In fact, here are six things I think made the movie good:

Oh, one thing more that bugged me… I know we have to call it Wonder Woman, but no one called her that in Batman v Superman: Really We’re Just Waiting for Wonder Woman to Show Up or in this film. She’s Diana, and that’s basically it. Just a tiny detail.

So, yeah. A good movie. But just good. 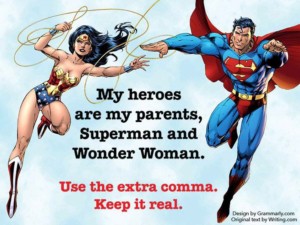