SIX OF THE WORST… Star Trek: the Next Generation episodes so bad that I couldn’t let my daughter watch them

Star Trek: The Next Generation was, in general, a really good show. However, there were a few episodes that I just cannot condone showing to my daughter. Here’s six of the worst of them. 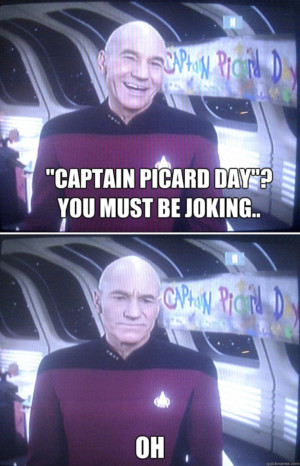 Why not? In the order listed above:

Only “Manhunt”, “Man of the People”, and “Sub Rosa” had any actual content issues, but seriously… just skip these episodes whenever they’re on. Trust me. 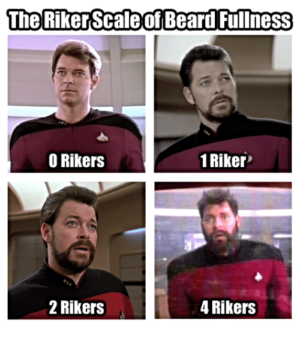 5. “Violations” — A race of telepaths comes onto the Enterprise. One of them is experiencing the crew’s memories against their will — so, basically mind-rape. Deanna figures it out and the bad guy is caught.

Why not? Now that I think about it, I may actually have let her watch this one because it does have some important character moments for Keiko, Deanna, Riker, and Beverly. It also shows that even though Riker wanted to advance his relationship with Deanna, when she said no, he stopped, and him not stopping would be a nightmarish experience. But an eleven-year-old doesn’t need to see media about rape. I’d like to preserve her innocence for a little longer, at least. 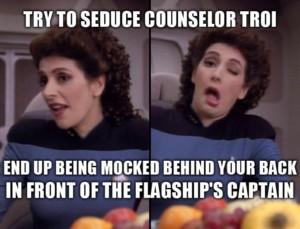 4. “Captain’s Holiday” — Picard goes on vacation to a pleasure planet, puts on an awesome Speedo, meets a woman, goes on an archaeological dig, and outwits a Ferengi and two criminals from the future.

Why not? Unfortunately, Star Trek (post-TOS) has a history of making its sex-related episodes into “funny” episodes. And while seeing the staid captain unwittingly advertise that he wants to have sex when really he just wants to relax and read is actually humorous, I don’t think there’s a message there that my kid needs to see. I did have to explain who Vash was when we got to “Qpid”, but that was easy — “Picard’s ex from an episode we didn’t watch. She’s a thief who steals from archaeological digs.” 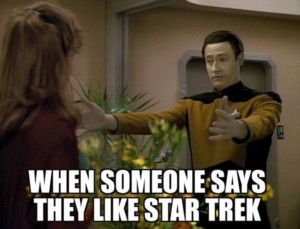 3. “Justice” — The crew goes to a planet where a lot of good-looking white people want to have sex with them, and each other. Wesley comes down to hang out with some teens, breaks a law (crushes some flowers by accident), and is sentenced to death. Picard faces off with the planet’s “god” and eventually breaks the Prime Directive to rescue the kid.

Why not? This episode again focused too much on sex. At age ten (that’s how old she was when we started watching) she didn’t need to know that adults have sex for pleasure, or see all that near-nudity. And on top of that Picard broke the Federation’s highest law and she wasn’t quite nuanced enough in her understanding of right-vs-wrong to comprehend why. 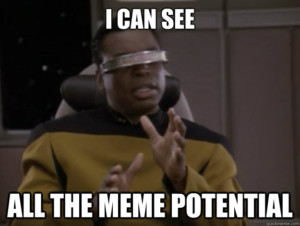 2. “The Naked Now” — Another first-season episode about sex, but in this case drugs were also involved. An illness from back in the original series makes the entire crew feel drunk and want to bang. Beverly eventually finds a cure, and Wesley saves the ship from an exploded-star fragment.

Why not? There were some good moments in this one, but it was too early-on in the show and it would’ve confused her. We really needed to know more about the characters before we got to an episode where they played against type. 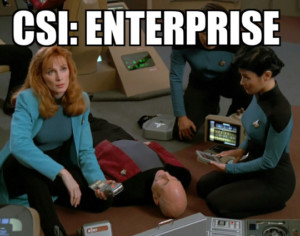 1. “Code of Honor” — The crew goes to a planet of stereotypes because they have transporter technology and some vaccine that can’t be replicated. The leader of the planet falls in love with Tasha, and she has to fight his wife to the death.

Why not? This is without a doubt the most racist episode of Star Trek that ever aired. Someone decided to make the aliens all African stereotypes, and the director apparently was fired halfway through because he was also a racist. There was some good character development for Tasha that my kid missed out on, but that was it. 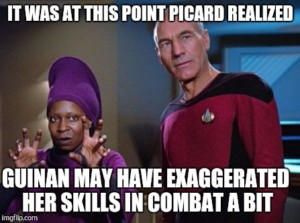 One of my personal favorite TNG episodes is “Cause and Effect” — the one where the Enterprise keeps blowing up and resetting itself in time because Kelsey Grammer’s ship crashed into it. But for some reason neither my wife nor my daughter liked it. The kid said her reason was: “Because it goes over, and over, and over again, and it’s so annoying. (You have to put annoying in italics.)” 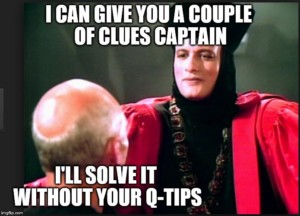 Eleven years ago, a superhero named Alexandra saved the world from the Dark King, and then disappeared without a trace. The only person who knows what happened to her is Andrea Collins — 29, overweight, lonely, depressed, and wanting more than anything else to know why her powers went away. She’ll find out in Josh Roseman’s new novel, After the Apocalypse, which Sabrina Peña Young, author of Libertaria Chronicles, calls “a refreshing approach to the superhero genre, a Bridget Jones Diary meets Supergirl tale that immediately hooks the reader with its painfully honest portrayal of a young superhero years after she has saved the world.” Get your copy now — Kindle and paperback versions available.