SIX OF THE WORST… things about Fuller House

With the sheer amount of online drama surrounding Netflix’s new Fuller House series, it’s only a matter of time until everyone sees at least one episode. I jumped on that grenade for you and watched the first half of the series (so far), and discovered six of the worst things about it.

Naturally, there will be spoilers for the first six episodes (especially the huge reveal in number five). But by now you’ve probably watched them anyway. 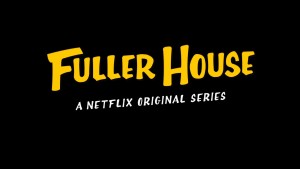 6. Stop yelling, Max! — Let me preface this by saying that Max Fuller, DJ’s middle child, is probably the second-best part of the show (after all the dogs that show up). He has the best lines, and he’s a super-cute kid. The thing is, though… he doesn’t deliver lines. He just shouts them out. At least when Jodie Sweetin was the middle child on the show, she managed to inject her lines with at least a little subtlety. Elias Harger, who plays Max, hasn’t been in anything else except a few short films… but then, Sweetin hadn’t been in almost anything else either when she got Full House. Hopefully he’ll get better with age — which we won’t really know until the inevitable second season, since Netflix films the whole show at once and then releases it in one go. If this was a traditional TV show, the filming schedule would probably have been different and the actor could’ve gotten more feedback as time went on.

Which brings this up… If Netflix follows its current release schedule, season two will air about this time next year… when all the kids are a year older. I wonder how Netflix is going to address this issue. 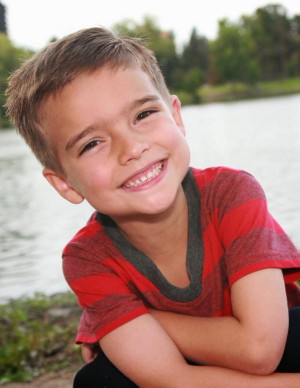 In “The Not So Great Escape”, Kimmy’s daughter Ramona is having trouble fitting in at school, so DJ’s oldest son Jackson helps her “escape” during chemistry class. They both get caught and suspended, and DJ and Kimmy face off over their parenting styles. The scene goes on way too long, and ends with a Full House hug between Kimmy and Ramona. And then it’s over rather abruptly, more so than I remember any of the original show being.

Next up, in “Mad Max”, Stephanie goes with a friend to Coachella, and when a DJ is injured, she (a professional, well-known DJ) fills in. But after missing Max’s trombone recital, she comes home and admits to DJ that not only does she really love her nephews, but also that she can’t have children. That’s a hammer blow, and it takes a sweet scene into the realm of WHAT THE HELL IS GOING ON HERE? Not that it’s not handled well, but the way it was fit into the episode made me want more clues to it earlier on, or in previous episodes, or at least some foreshadowing. Instead, a humorous episode takes a super-serious turn, and at the end I felt unsatisfied by how the rest of the episode surrounded it.

Which brings this up… Could the pacing also be because Netflix doesn’t have a set length for its episodes? I mean, yeah, they’re all 25-30 minutes long, but because it’s Netflix it doesn’t really matter. Episodes of Orange, Daredevil, and House of Cards also have slight fluctuations in running time. However, if the show’s being written by veteran sitcom writers, they may be facing a lack of discipline that forces them to improve their pacing. I really don’t know. 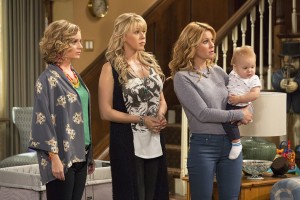 4. Please re-frame that shot. — Speaking for a moment more about Stephanie… If you saw the first episode, you know that Jodie Sweetin (allegedly) had breast enhancement surgery. My fiancee and I agree that her breasts are unnecessarily distracting — especially in the premiere. Look, this is a family show, and yes, Stephanie is supposed to be the party girl, but given that her entire family was around during the going-away party for Danny and company, one would think she’d have dressed at least a touch more conservatively. Then, in “Mad Max”, the shot of her admitting she couldn’t have children was made less impactful, at least to me, by how distracting her breasts were. And she was wearing a t-shirt that covered everything, along with a scarf on top of that! Would it have killed the director to reframe that shot just a little bit, to focus more on Stephanie’s face?

Which brings this up… Speaking of sex appeal, there are a lot of borderline jokes in this show so far. Most of them are delivered by the adults, true, but this is rated TV-G despite jokes about things being kinky, adults drinking to excess, and a pretty tense scene between Kimmy and her estranged husband. (It was played for laughs, but it was still kind of tense.) You can’t just plunk your younger kids down in front of this one. 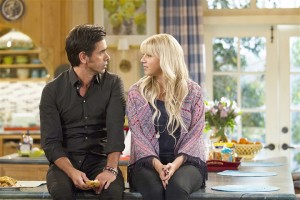 3. How is she the star? — Let’s move onto the older Tanner child for a moment. How is Candace Cameron Bure the star of this show? It’s obvious that they’re trying to recapture the magic of Danny, Joey, and Jesse with (respectively) DJ, Kimmy, and Stephanie, but there’s a major difference: Bob Saget has comic timing, along with a long-suffering expression that you can just barely see peeking out under the Danny “Super Dad” Tanner persona. Bure is just… well… she’s playing a single mom of three kids, and doing all the things that such a person would do: being firm but fair, running herself ragged, taking care of her son’s dog, and supposedly being the moral compass of the family. But between her annoying voice (which really only has two settings: “strident” and “understanding”) and the way her character only has two defining traits (“mom” and “veterinarian”), she’s by far the least interesting part of the show.

Which brings this up… I realize Bure is an actress and her job is to do what’s on the page, but I wonder how much her personal opinions are going to influence what types of scenes she’s willing to perform, especially given the types of things that face today’s single moms. I’m not saying she’s going to balk at doing a sex scene because, let’s be real here, there isn’t going to be one, but various articles have said the show is going to tackle some of today’s problems facing families, and DJ, as the ostensible star, is going to have to have at least one of them. Right now, though, she’s just… there. 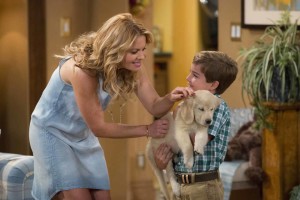 The real star is that puppy.

2. Kimmy is the only funny adult. — Before returning for Fuller House, Andrea Barber hadn’t acted for twenty years. And yet she comes back and is instantly the most funny adult on the show — more so than Saget, Coulier, Stamos, Bure, Sweetin, Loughlin, Tuomy-Wilhoit, or whoever that woman was playing Danny’s new wife. Halfway through the season and she’s still getting the best lines, wearing the best outfits, and making the best faces. I remember when I was younger hating the character of Kimmy Gibbler, but now not only is she my favorite adult, but she also has one of the most relatable storylines on the show: dealing with her estranged husband and the father of her tweenage daughter.

Which brings this up… If you haven’t read that Daily Beast article I linked in the previous paragraph, you really should. It’s quite interesting. 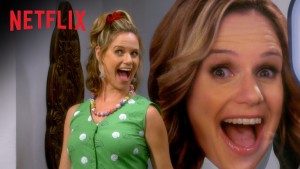 1. The reviews. — Here’s a sampling of Fuller House review commentary from the internet:

I found all of those quotes in less than five minutes, and for the past month or so I’ve been reading similar ones. But here’s the thing: the show isn’t made for critics. It’s made for people who watched Full House, now have Netflix, and can kill six-and-a-half hours over Friday, Saturday, and Sunday nights. It’s cashing in on the same feelings that gave us Girl Meets World. It’s… well, honestly, it’s beautifully-shot, lit, set, and edited, but it’s just not good. The target audience knows this, and they don’t care.

Which brings this up… I’ve literally seen Dave Coulier in nothing except for Full House, Fuller House, and filling in at my local comedy club when Bob Saget couldn’t make it. He was funny, by the way, but seemed pretty angry about everything, and he still has that general expression of “what the hell am I doing with my life?” That worked for his original run as Joey, but now I don’t believe at all that he’s a successful Las Vegas entertainer. I’m just not sure where else the show can go with him — or, truthfully, with any of the other original adults. 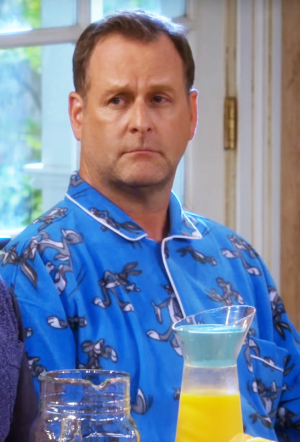 The way spinoffs used to be done was that the producers would spend the first half of the first season referring back to previous shows and plotlines, and bringing on people who were in the originals. Angel had Buffy and Oz in its first few weeks, and of course Cordelia was one of the stars. Deep Space Nine sent Dr. Bashir to the Enterprise for one Next Generation episode in hopes that he would interest people enough to come over, and there have been plenty of crossovers in the Dick Wolf Chicago [Noun] universe. And now Fuller House did it by having its previous stars on the first three episodes of the show — everyone was in the pilot, Stamos was in the second episode, and Coulier was in the third.

When you have to wait a week between shows, this sort of thing makes sense. It gets people to maybe watch a show they might not be otherwise interested in, and maybe they’ll stick around for a few more. But this is the future. This is Netflix, where the entire season drops in one day. People are going to commit to watching it, especially if it won’t take very long (and 6.5 hours is totally doable, especially in half-hour chunks, especially on a non-serialized sitcom). The appearances of Jesse and Joey felt extremely forced, especially given that, later on in the season, Ramona (who’s twelve) is allowed to babysit Tommy (the baby) by herself.

There are a lot of things people are nitpicking about the show that they could probably ignore, but as someone who’s spent the past ten years working in television, it just bothers me. 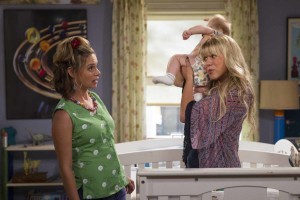