We’re coming up on the end of the year, and for most people — except those who work in retail — that means a time for empty cubicles, holiday parties, free food (I will eat all the homemade fudge), and decorations that will be left up far longer than they should.

But work’s going to go very slowly the next week or so, until you finally get to that magical time known as “the week between Christmas and New Year’s when no one does anything”. Here are six of the best ways to make things go a little faster. 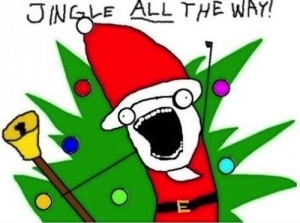 6. Make a game of it. — I’m not talking so much about “pin the tail on the accounting mishap”, but I’m sure your job has at least one drudgery-filled hour or two in it every day, right? At the moment, I happen to be working on a project where I have to map 1300 lines of a spreadsheet into a third-party application. To make it more bearable, I’ve made a game of it: how close can I get the mouse to the drop-down before it loads? How many times do I have to click the scrollbar to get where I’m going? What can I do with only my keyboard instead of having to move the mouse at all? Not only does it make time go slightly faster, but it also helps increase my efficiency so I can spend more time on projects that don’t bore the hell out of me. 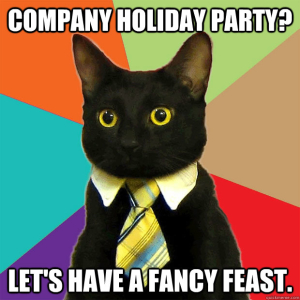 5. Try a new place for lunch. — As the area empties out of cubicle workers, the places for lunch will get less crowded as well (unless you work near a mall). I’m sure there’s a place you’ve been dying to try; now would be a great time. Especially since, as the year winds down, you should be doing less work and going to fewer meetings anyway, and that means if you’re back half an hour late no one is really going to notice. For an extra bonus, suggest that your entire team goes; if your boss is there too, you can’t get in trouble. 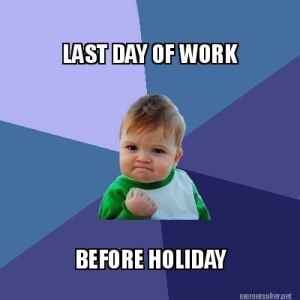 4. Take a walk. — This one is more dependent upon where you live, but as long as it’s not raining, snowing, gusting, or freezing, you can throw your jacket or coat on and go for a little walk around the block. If you eat at your desk, you can probably get away for half an hour at a time when the sun is high enough to warm you up if you stay out of the shade. Admittedly I’m suggesting this one because I sit next to a wall of windows and it’s really bright and happy out there, but the theory is sound. At least you won’t come back sweating like you would if you tried this in August. 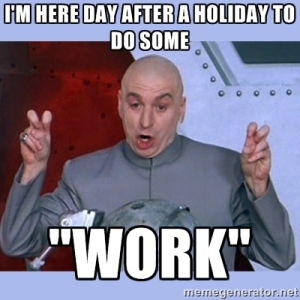 3. Plan a charity drive. — You really need to start this one closer to early November, but good planning will not only make you less bored but also help out someone who needs it. Most companies have some sort of time-off matching for charitable acts, and no company wants to get the bad publicity of forcing an employee not to be able to engage in generosity. Find a charitable organization you believe in and start collecting coats, or old cell phones, or toys. It beats sitting at your desk. Oh, and, if you aren’t motivated enough to do it yourself, you can always join a group who’s doing it already. 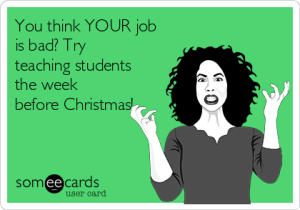 2. Clean your area. — Spring cleaning is for the birds. It’s the end of the year; kill a couple of hours by going through every piece of paper at your desk and deciding if it needs to be kept or shredded. And if your team has a bunch of file cabinets, maybe you could organize them? Get a good, clean start on the new year. Just be aware that this could backfire on you as other teams start wanting your organizational help… during times when you actually have work to do. Also, don’t forget to organize your hard drive, desktop, and e-mail. You’d be surprised how cluttered it gets in there when you’re not looking. 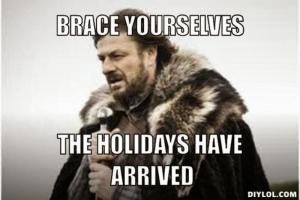 1. Work from home. — It’s a lot easier to goof off when working from home, and when you don’t have a lot of work to do, it’s super-simple to put your laptop on the couch next to you, fire up Netflix or your game console, and chew your way through an old TV show or Fallout 4 or whatever. You could also clean your house, cook for your upcoming holiday party, do laundry, or read a book. No one will notice as long as you answer e-mails promptly and get the work done that you need to get done. And, given that it’s the season of receiving gifts, you could always say you need to be home to sign for a package. After all, your boss won’t want you to have to stand in line at the post office and waste time you could be spending working. 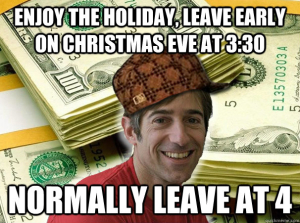 If you’re feeling really industrious, you could organize a decorating competition for the holiday. Those get really fierce, but they can be a lot of fun. When I used to work for a TV station, the promotions department really went all-out; one year, they turned themselves into a holiday aquarium, complete with a big-screen TV pointed out toward the hallway with a live feed from an actual aquarium. Needless to say, they won.

My go-to is always Hanukkah, because fewer people will do it, and you can have janky decorations but the judges will give you the benefit of the doubt because there are so few Hanukkah decorations out there. You can even print pictures of the people in the various Adam Sandler Hanukkah songs and give out prizes for anyone who gets them all correct — which is a lot easier now that everyone has a smartphone; the last time I did it, we were in the era of the iPhone pre-3G, and no one knew how to look anything up.

I tried to find the video of my “web team salute to Hanukkah”, but it seems to be missing from the internet. And apparently my Imageshack account is kaput so I can’t even show you the pictures. Rest assured, it was suitably rustic. 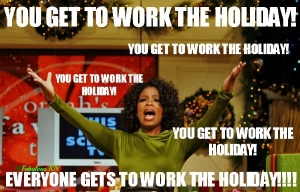 When you work in retail or the news business (or at a hospital), this is your boss.