Anyway, here are six of the best things that seemed like a good idea at the time. 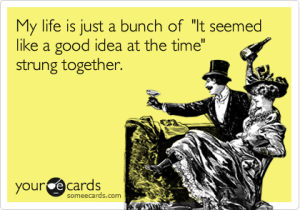 6. Food Challenges — I think we’ve all seen the scene in The Great Outdoors where John Candy’s character eats the enormous steak. On the surface, food challenges seem like a great idea: eat a large amount of food, win a prize. How hard can it be, if professional competitive eaters do it?

Didn’t think of that, did you? Yeah. Those people are athletes (of a sort). You’re just a person who thinks it’s possible to eat a lot of food. Even good-tasting food starts to get disgusting after a while; I don’t like grilled cheese on donuts that much, but some people do. Well, Tom + Chee near my house has an “eat 13 grilled cheese donuts with no help and no bathroom breaks” challenge. That just sounds horrifying. I do like hamburgers, but there’s a two-pound burger challenge at a restaurant I eat at and that’s too much even for me. I can barely make it through a large steak anymore without feeling like I’m trying to summit a mountain or something. And near my old job, a five-pound burrito challenge that one co-worker got about 60 percent of the way through before he gave up. Oh, and once you’re done eating, all that food has to go somewhere.

Didn’t think of that, did you? Some 5Ks and 10Ks are serious business. Atlanta’s Peachtree Road Race is the nation’s biggest 10K, and it sells out every year. Oh, yeah, races like this aren’t free, not by a longshot. PTRR costs $35. Thirty-five bucks to exercise for a couple of hours. Surrounded by a teeming mass of humanity, which is always a treat — nothing like walking in the park or on your gym’s treadmill. These races often start early in the day, to avoid people facing heat exhaustion when the sun is high, so you have to get up really early, drive down there, and find parking. A 5K or 10K in the heart of a city? Good luck! Even if you do one at Disney, you’re still on the hook for the $20 daily parking fee. Awful lot of rigmarole, isn’t it, just for a collectible t-shirt, when you can do it in the comfort of your own gym while watching SportsCenter. And then not have to deal with port-a-potty lines 100 people deep, in the dark. There’s something to be said for pooping in comfortable surroundings. 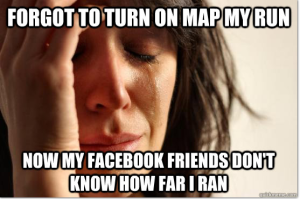 4. Moving Without Movers — Movers aren’t cheap. You’re paying for their time, their energy, their insurance, their gas, and their truck. Why not just do it on your own? You can lift most of your furniture, and there’s bound to be someone willing to help with the bigger stuff if you offer free pizza and beer. A U-Haul doesn’t cost too much. Just do it yourself, right?

Didn’t think of that, did you? Wrong! When I last moved, it cost me $660 plus $120 in tips for five guys to load all my stuff from my ground-floor apartment (in Georgia, most apartments enter on the second floor and go down to ground level), carry it up the stairs, then down the half-flight to the parking lot, load it in their truck, drive it to my new apartment, and bring it back down to my new ground-floor apartment. Took about five hours in total. Now, compare that to finding people to help, carrying all of my boxes (these guys do this for a living and can carry more boxes at once than me), professional and insured furniture moving, not having to deal with getting a U-Haul (which always costs way more than the $20 or $30 they advertise on the side of the truck) and as a result not having to drive the damn thing yourself… Look, I’ve moved without help before, and it sucks. It always seems like such a great idea, but it’s a lot easier (and better for your mental health) to pay someone else and put all your energy to unpacking and organizing. Otherwise you’ll never do it. 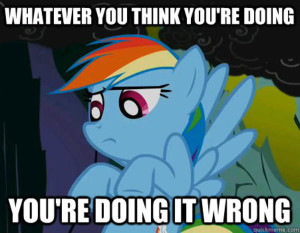 3. Going the “Back Way” — Traffic is horrible every day, and you’re stuck in it. The highways are jammed, people are morons, and in certain parts of the US the tolls can be ruinous. But there are plenty of side streets and sneaky little ways to get home. So let’s go that way!

Didn’t think of that, did you? Let’s not, shall we? First of all, before you go anywhere, ask Google what’s the fastest way. It’s been right every time for at least five years, at least in my case. When Google says take the highway, you take the damn highway. Because you’re not the only person going the back way, and there’s going to be traffic there too. And, realistically speaking, you’re probably going to save no more than five minutes. I used to drive from Buckhead to Marietta every other Tuesday, leaving at 4:30pm. I could take the highways and get there in an hour, or I could take the surface streets and get there in just under an hour. If only I’d listened to Google… 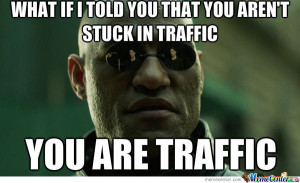 2. Spending an Entire Day Watching Netflix — It’s Saturday, and your significant other is at work all day. You have a show on Netflix (or Amazon, or Hulu, or DVD) that you’ve seen a bunch of times, but, I mean, it’s right there. Why not watch it again, just to make sure you like it as much as you did the first few times around?

Didn’t think of that, did you? While there’s nothing actually wrong with binge-watching*, you’re actually hurting yourself more than you think. With that time, you could have exercised (most cardio machines have a place for your phone or tablet, so you can watch shows at the same time), cleaned (I’m sure you have dishes in your sink and your toilet could use a good scrubbing), organized something that needs organizing (like your important papers or your closet), offered to work an extra shift at your job (dollar dollar bill y’all), hung out with other humans (binge-watching is often solitary), written (many binge-watchers are writers who complain that they don’t have time to write, or can’t get the words out) or any other number of things. Instead you sat on your couch or bed all day, probably eating unhealthy food — or, even if the food was healthy, there was way too much of it. Trust me; I know. Every time I finish an episode, I get up to get more water and usually end up with food instead. I know that sometimes binge-watching can help shut out your problems for a while (which is why I watch so much Star Trek), but if you’re not using the binge-watching for a purpose — that is, if you’re just doing it because you think there’s nothing else to do — maybe you should consider using your time more productively. 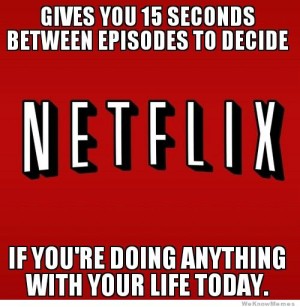 1. Writing a Book — You’re in the shower one day when the greatest idea ever comes into your brain. You finish up quickly and write down some notes, and then you think it would be worth turning into a novel that everyone is going to read. You have dreams of fame, fortune, and an eventual adaptation on HBO. Your book will be the best thing ever; you’ll be the next Rowling, or Patterson, or Robb/Roberts, or Pratchett, or a writer whose last name doesn’t start with R or P.

Didn’t think of that, did you? Writing a book is hard as hell. I’ve completed seven (not including The Clockwork Russian, which is a short-story collection), but only two have been published by a reputable publishing house**, and it looks like another one I’m going to have to self-publish on Amazon. Now, look, I’m not one to crap on another person’s dreams***, but it’s not just “write 80,000 words and then mail it off to Random House books”. Writing a book takes time and planning. Then there’s rewriting, editing, workshopping (a step most people ignore), rewriting and editing again, workshopping some more, submitting about 30 times, being rejected about 30 times, finally deciding “screw it, I’m just going to put it up on Amazon”, obsessing over your KDP stats, marketing on social media until your friends hate you, realizing that no one is reading your book — not even your friends and co-workers who promised to buy a copy — and then doing it all again “because the next one will be even better”. I’ve written a bunch of columns about writing (more than I thought), and yes, I’m a writer who has had a teeny-tiny bit of success (and I still get a royalty check every now and then that’s just about enough for dinner at Chili’s), but to have even the minuscule amount of success I’ve had takes more work than you think. Write your book, but be warned: it’s not easy. At all. 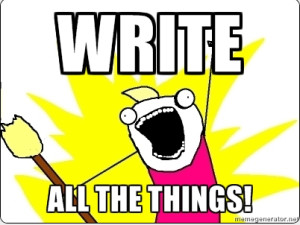 Y’know what else seemed like a good idea at the time? Committing to write a weekly column. So far I’ve written over 100 Six of the Best columns, and while I’ve had times when I’ve written two, or five, or even more columns in advance, there are other times when I’m sending one in under the wire. This one, for example, was written two days prior to its publication, but the last ten were written in chunks over time and some were finished months in advance. Hell, I have one scheduled for mid-August that I wrote last November, and two more sitting in drafts that are just waiting to be finished, that I started last summer.

I’m not trying to discourage you from trying new things. Far from it. I’m just warning you that a lot of things seemed like a good idea at the time, before you thought through all the ramifications. Get excited, do stuff, but don’t forget to think ahead. Just in case. 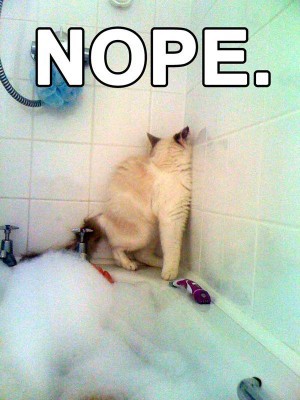 * Obviously this entire item can be ignored when Netflix drops a new season of a show and you have to watch it all before the spoilers hit. Even I understand the benefit to tearing through a season of OITNB in one weekend.

** One of my books was published by a scam publishing house, because I didn’t think ahead and do research before signing the contract. Fortunately, while they were a scam, at least they were relatively inoffensive about it, and they didn’t make me give them any money to publish the book.