SIX OF THE BEST… things about the “old” internet

SIX OF THE BEST… things about the “old” internet

Snazzy HTML5 and CSS3! JavaScript libraries! Listicles*! Share buttons everywhere! Advertorial content! Behaviorally-targeted remnant advertising on every page, or placeholders that say “please don’t block our ads”! Yes, friends, the internet is full of awesome things these days. I should know; I work there.

But there was once a dark time where none of these things existed. A cluttered landscape of “under construction” gifs and pages that said “best viewed at 800×600 using Internet Explorer 4.0”. Ah, those halcyon days! Here are six of the best things about them. 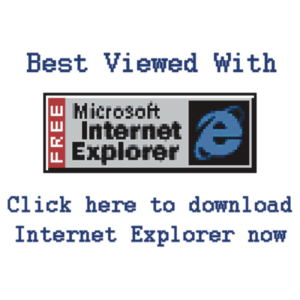 6. It was okay to suck. — These days, if you’re going to put out a new site, you have to make it perfect. Templates make that easier, sure, but not every developer is allowed to use them. Sometimes they have to build the site from the ground up, and then run it by about a zillion committees (each of whom has “vital” input that “must” be incorporated), and it has to be perfect to everyone before it goes live. By the time it does, it’s too late to take advantage of whatever market it was intended to hit.

But in the old days… …you could just knock together a site and throw it up there. I had about a million different site ideas, and I actually published about fifty of them online. From a precursor to Fark to a crappy tables-based site collecting my own writing, I could build something and have it online in about a day. When I started working as a professional web designer in 2006, there was a little more oversight (and we had templates — though I was the one who built them), but I could still get a special section on our website in a couple of hours and then tweak it as needed. It was great. 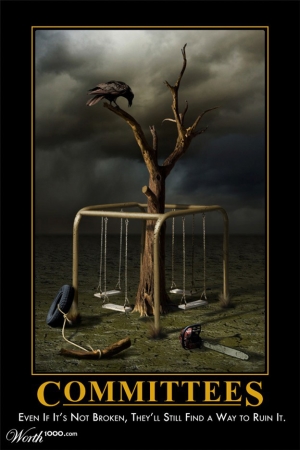 5. Every site didn’t have to do everything. — Though single-serving sites are back on the rise, there was a time in the early 2010s when sites had to do everything. It wasn’t just about content creation and publishing; it had to be easy for users to comment, interact, share, post to social media, and sometimes play a little game in the corner. Even now, on the huge sites I work on at my day job, there’s still an expectation that everything has to be there. The content is almost an afterthought.

But in the old days… …if you wanted to get your site to go “viral”, you had to work really hard at it. There were very few sites that could get your work into the zeitgeist, and the zeitgeist itself looked down on the internet as a source of real content. So you were content to get fans the old-fashioned way: putting out real content and letting people tell their friends about it. I mean, that’s the main reason I still follow Maddox on Youtube — because I used to read his work back in the early 2000s. You can’t buy that kind of marketing. (Well, you can, but you’ll feel dirty afterward.) 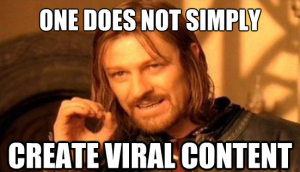 4. Ads weren’t everywhere. — Turn off your ad blocker and go to any newspaper or TV station’s website. These are the legacy sites that have a ton of built-in traffic because they’ve been around forever. Have you noticed how many ads there are? And how they’re everywhere? Not just a couple of banners, but expandable ads, pre-rolls, behaviorally-targeted remnant, in-banner video**, and advertorials that you don’t even know are sponsored until you get to the bottom and it says “this article was brought to you by Geico” or whomever. It’s all about getting the highest CPM, by any means necessary, because we have to pay for this content somehow.

But in the old days… …sure, we used to think ads were taking over the internet, but in thinking back on the sites I used to visit, there were only a few small ads present. 468x60s, 300x250s, maybe some little logos, and that was it. And because companies weren’t putting much of their ad dollars toward online, it was easy to say “sure, we’ll put up a banner” and that was that. A similar change happened in mobile toward the end of the last decade; it was an afterthought. But that changed quickly, didn’t it? Anyway, I miss the old web with its smaller ad profile.

3. Pages loaded slowly because the internet was slow. — Many people have fast internet. I’m sure most of the people reading this have phones that work faster than their first computers. But, again, look at some of your favorite pages by companies that didn’t make their start online. Look how slowly they load! There are so many script libraries and tracking technologies (more on that shortly) that it can take forever for a page to finish downloading to your browser. This is getting a little better, but there’s still only so much your browser can process, especially when you’ve already got ten tabs open***. Webapps, too, have slowed down; most of what we do on webapps used to be Java-based applets or self-contained programs that ran completely client-side with only occasional pings to the server side. But now the webapps that I use the most are… let’s just say “not as fast as I’d like”.

But in the old days… …when I first got onto the internet, I had to dial into an ISP with my 56k modem**** and it took forever for pages to finish showing up. When I got to college in 1996 and we had high-speed internet, I was in heaven — and it wasn’t even “real” high-speed internet, not as we think of it today. It still took ten minutes to download a file that was only 5MB, and websites weren’t especially fast because of all the animated gifs (and because most people didn’t know what file compression was). And we loved it! Now, if things are even the tiniest bit slow, we complain, but back then, no one said anything about it because we knew how lucky we were to even be online. 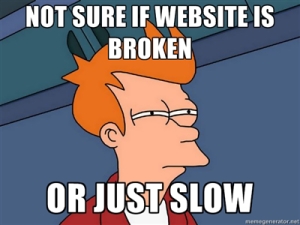 2. You weren’t being tracked on every site. — I use Ghostery to keep track of who’s keeping track of me, and a few do-not-track plugins in my browser. But every time I go to certain sites (like Mental Floss, which I promise I’m not picking on because I dislike them; quite the opposite) I see the popup fill so far that it runs off the screen. Just how many tracking pixels do we need? I mean, there’s pixels for ads, pixels for behavior, pixels for video (which I never watch), and then all the script calls: Facebook, Google, Twitter, and a zillion other services that claim to help better your clients’ experience by gathering information on your users. And most people just let it happen passively; they consider it a cost of doing business.

But in the old days… …behavioral ad targeting wasn’t a thing. The closest you got was putting AdSense tags on your site and selecting ads that you hoped were relevant to your visitors because you got paid per click. You had to be smart and involved; you couldn’t just farm it out to some other company. And as a result there was more privacy and less script, which led to faster-loading pages — a major coup, since not everyone had fast internet. 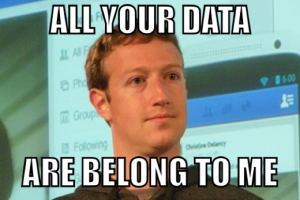 1. It was an exclusive club. — Ask everyone sitting around you right now. I guarantee they all have access to the internet. The only people in my family who don’t have it are my two grandmothers, and even one of them used to go on AOL every now and then, about fifteen years ago. Most people, even if they don’t have a computer, have a smartphone. And for those who don’t have either, there’s libraries or even work computers. We all go on Facebook at work anyway, right? Computers have dropped dramatically in price; you can get a good laptop for under $400, and a Chromebook for even less. Wifi is everywhere. It’s literally almost impossible in most of the developed world***** to not have access.

But in the old days… When I first gained access to the internet in 1994, paying $25/month for service through a local company called Interpoint that my friend worked for, I was probably the only person on my street who could do that. We didn’t have the internet at school, and internet cafes were a distant dream. I had e-mail, and I put the address on my business cards, but for two years very few people had actual internet access that didn’t go through AOL. Even when I got to college and we had high-speed connections in the labs and every student had an e-mail address (I still remember mine), most people barely used the internet at all. It wasn’t until maybe 1998 or so that the internet became more ubiquitous, and even when it was available on phones it wasn’t until the advent of the iPhone that it became a true consumer technology instead of just something for early adopters. I was part of an exclusive group, and it was awesome. 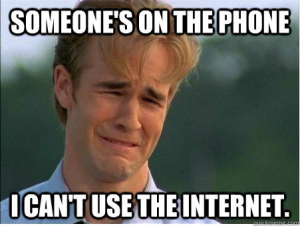 Though I didn’t publish it, my master’s thesis, written and defended in 2002, was one of very few papers to address internet privacy behaviors. I proved that people talked a big game but didn’t actually monitor their own privacy, and were willing to give away personal data and be cookied just because. I never actually collected the data (it went to a dead form field) but it was fun to see that people not only had no idea how to behave responsibly on the internet in terms of safeguarding their personal information but that they also had no idea what half the terms even meant.

I wish I’d published. I might be an academic, instead of a cubicle monkey working in advertising. The road not taken, et al. 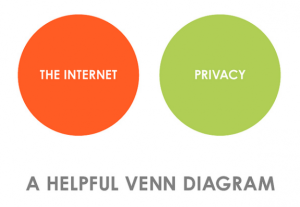 ** AKA “the bane of my fucking existence”.

**** My first modem was actually an external US Robotics 2400bps with about ten different status lights on the front, but that was in my pre-internet days. I used it for BBSes. Kids, ask your parents.

***** I don’t know enough about the rest of the world to speak intelligently on the topic. 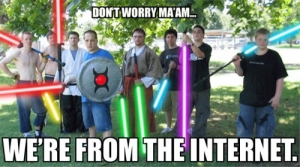