With all the positive noise being made about Inside Out (which, sadly, I still haven’t seen), I wanted to take a moment to take you back to the 1990s, to Sunday nights on Fox, to a show about a fact-checker* at a magazine** headquartered in New York City*** featuring a white guy in his (probably) late 20s or early 30s****.

This, my friends, is six of the best things about Herman’s Head. Spoilers, obviously. 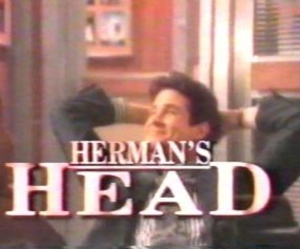 6. The Simpsons Connection — Hank Azaria and Yeardley Smith, both regulars on The Simpsons, were co-stars on this show. Azaria played Jay, Herman’s best friend who thought he was a ladies’ man — a typical character on shows like this — while Smith played Louise, the nerdy secretary with the whiny voice (again, typical). Though Smith did make my teenage self crack up when she, as Louise, related the story of how her character got a “this end up” tattoo on her butt. Hey, for the early 90s, that was edgy! Anyway, the show continued to appear in references on The Simpsons, including by the Comic Book Guy (voiced by Azaria). 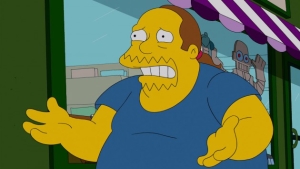 5. Leslie Nielsen and the God Illusion — In one episode, God appears in Herman’s head, portrayed by Leslie Nielsen. The character says that everyone has an image of God in their head, and Herman’s is Nielsen. That’s surprisingly deep for a sitcom. I happen to be an atheist, but there’s a lot of writing on the fact that God looks like what you expect God to look like. Unless you’re William Shatner, in which case God is an old white guy with a beard who also needs a starship. 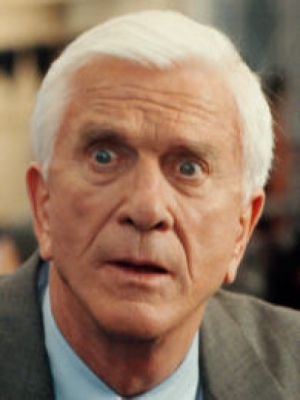 4. “Love and the Single Parent” — In the second-season finale, Herman is dating a woman named Carin, but it turns out that he’s really more interested in the bond he’s forging with Carin’s son. (That sounds weird written down.) In the end, Herman decides it would be better to break up with Carin because he doesn’t love her — he loves being a pseudo-dad to her son. Even though my parents aren’t divorced, this episode still hit me pretty hard. It’s been 22 years, but my best guess as to why is because Herman was this guy who just wanted to have fun, date women, and do his job, and here’s SRS BSNS about what, at the time, was less-talked-about (divorced parenting and dating new people, and how that impacts kids). Also at the time I had a close friend who had a stepdad, and maybe that had something to do with it too. Anyway, I still have a fond place in my heart for that episode. 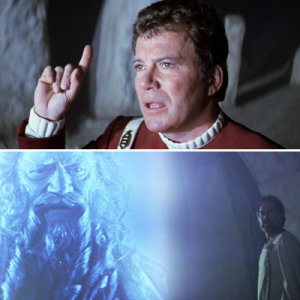 What… does God… need… with a starship?

3. Sign of the Times — In many ways, Herman’s Head was a sign of the times: in the early 90s, working as a fact-checker at a magazine in New York City and having enough money to have your own place without a roommate apparently was a thing that could happen. 15 years later, I went into journalism and I learned that (a) no one fact-checks anything (b) you can’t make a good living doing journalism unless you’ve been doing it for a while (c) no one starts out in New York City. To be fair, I started out in a top-50 market (Orlando), but that was more situational than anything else. If the show was rebooted today, Herman would work at a thinly-veiled version of Buzzfeed as the guy who always wants to write the hard-hitting articles but ends up collating posts about funny cats and dogs. 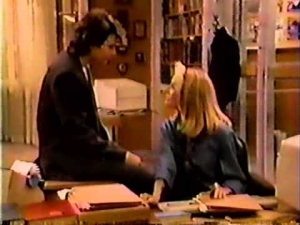 Herman and Heddy at work.

2. The Head is Accurate — I’ve been reading Divergent (late to the party, I know), and although it’s not the deepest book on the planet, the five factions make sense in terms of what people are like. So too with Herman’s internal characters: Angel (positive emotions), Animal (baser instincts), Wimp (fear), and Genius (intellect). Most humans can be boiled down to these four characters, and maybe we even talk to them in our heads. Additionally, it was cool how, even on a half-hour sitcom, we still managed to get mostly full characterizations of everyone — not just the five people in Herman’s office but also the four people inside his head. That takes at least a little talent. 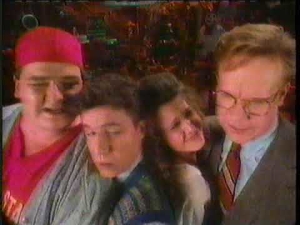 1. The 90s-est Series Finale Ever — The final episode of Herman’s Head finds Herman in the hospital after being injured in a car crash, and as each cast member shows up, the appropriate Head character takes Herman’s place in the flashback scene. If that’s not a 90s finale, I don’t know what is. I have very vague memories of watching this episode; by now the show had moved to Thursdays, paired up with In Living Color, and I think I had other things to watch. Or possibly was at wrestling team practice. Either way, it was one heck of a 90s episode, and if you want to see it, the whole thing is on YouTube. 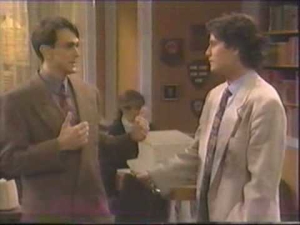 Hank Azaria and William Ragsdale as Jay and Herman

Thinking about old TV shows reminds me of a YouTube channel I’ve been enjoying lately. The curator, one RwDt09, puts together supercuts of TV show opening sequences from the 50s through the 90s. I didn’t realize there were that many failed TV shows in the 80s and 90s.