Did you know there have been six total Star Trek serieses? Did you know this column has lists of six things in it? It’s like a match made in heaven!

Warning — this column will contain spoilers for all six televised incarnations of Star Trek, as well as for one fanfic series.

6. “The Turnabout Intruder”, The Original Series — Captain Kirk meets up with a former lover who uses an ancient device to switch bodies with him, thereby taking revenge on Kirk for being Kirk and Starfleet in general for not letting women command starships.

Was that so bad? Yes. yes it was. In fact, I can’t do it nearly as much justice as Mark Oshiro does, so just go read his review. Honestly, even before I was socially aware, I knew this was an awful episode. 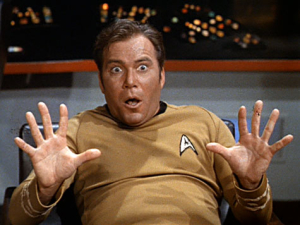 5. “These Are The Voyages”, Enterprise — After a couple of good runs with the mirror universe and genetic manipulation, the show ends as nothing more than a holodeck simulation as Riker attempts to figure out what to do during the TNG episode “The Pegasus”. Trip dies, for some reason.

Was that so bad? I’ve only seen the episode once, and honestly it wasn’t awful (other than the fact that you can tell just how much Frakes and Sirtis have aged since 1994, when “The Pegasus” aired), but I felt it was an enormous cop-out ending to an extremely mediocre entry into Trek canon — an entry that, owing to the advances in technology between 1969 and 2005, has forced some serious TOS retconning. There had been talk of acknowledging the other serieses by having Shatner play the unseen “chef” character, which unfortunately didn’t happen; at least then maybe the episode could’ve been about the founding of the Federation, instead of Riker and his problems. 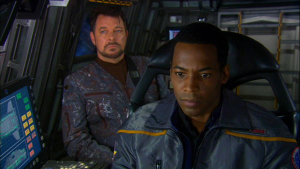 4. “The Counter-Clock Incident”, The Animated Series — The Enterprise crew ages backward, and it’s up to her first captain, Robert April, to stop it.

Was that so bad? Not really. It just wasn’t as good as the other three I’ve yet to discuss. I did like the use of Captain April — not sure why the writer didn’t just go with Pike, but it does tie into the Diane Carey novel Final Frontier, which is about Kirk’s father and the very first voyage of the Enterprise. It was a satisfying episode, although not very final. The Animated Series just sort of stopped. 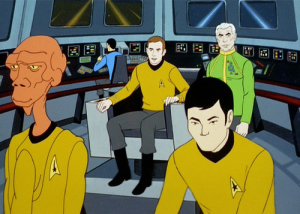 3. “Endgame”, Voyager — Years after Voyager’s return home, Admiral Janeway decides to tinker around with time to get everyone home sooner… and in one piece.

Was that so bad? I was a little disappointed with the final scene, when the ship finally gets home; it felt like there was a missing final act that got cut in the interest of time. I think GL Dartt did a much better job with this in her “Just Between” series (you can read her interpretation here, but be warned that her work contains explicit sex). Also, I think that on the whole Voyager overused the Borg and time travel; while the Borg were the show’s big bad in the latter half and did need to be addressed, I think the time travel aspect was overdoing it. A pretty good finale, though not without its problems. At least they got Kate Mulgrew’s older-age makeup right. 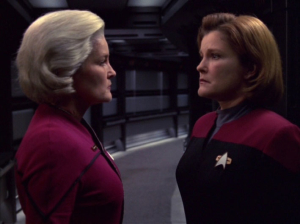 2. “All Good Things”, The Next Generation — Q sends Picard hopping through time in an attempt to allow him to save humanity, if he can figure out Q’s puzzle.

Was that so bad? Nope! It was great! Callbacks to the premiere, glimpses of future Starfleet technology, guests from the past like Yar and O’Brien, and a mystery that spans 32 years. In the end it was going to come down to Q and Picard, and neither actor disappointed. I remember seeing this episode as a two-hour movie when I was on vacation with family in Washington, DC, and we made a specific point of getting back to the hotel after sightseeing so that we could see this episode live. And, finally, we see Picard not separating from his crew by joining them for some poker. 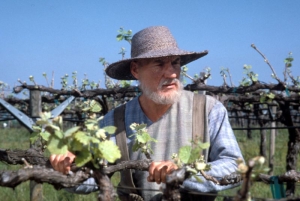 1. “What You Leave Behind”, Deep Space Nine — The ninth part of the final story arc on DS9 finds the Cardassian resistance ready to strike back, the Federation on the cusp of forcing out the Dominion, Dukat ready to release the Pah Wraiths, and Sisko sacrifices himself* to save Bajor.

Was that so bad? While I really loved “All Good Things”, I think “What You Leave Behind” was such an amazing culmination of a multi-year story arc that it simply has to be #1. The Dominion are defeated, the Cardassians and the Bajorans are saved, the crew is breaking up to go do other things, new relationships are being formed, and just when you think it’s all over, Gul Dukat and the Prophets are back to horn in on Sisko’s life. The montage scene after Sisko dies, when everyone is getting ready to wrap up the show, is so, so good. 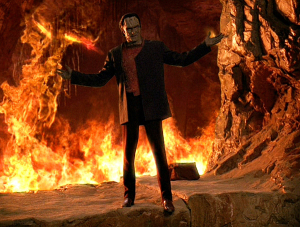 Gul Dukat is on fire!

I also want to give a shout-out to the two finales of the Hidden Frontier universe. HF ended with “Its Hour Come Round At Last”, capping off an amazing seventh season — the show pulled out all the stops in terms of graphics, acting, and storyline for the seventh season, and this episode was killer. Siroc’s evil plan comes to a head and everyone on the crew must work together to stop him. The show ends with a wedding, and everyone is more or less happy. 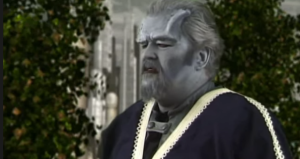 The production team then got a little too ambitious, starting two concurrent serieses, Odyssey (basically Voyager) and The Helena Chronicles (more like TNG). Unfortunately the shows couldn’t be sustained, but that did lead to “Tossed Upon the Shore”, a two-hour movie wrapping up the Hidden Frontier universe for good and bringing everyone back together. Given that everyone was doing it for the love, and donating their time, you really have to give the actors, producers, directors, and artists credit for putting together such great productions.

* He comes back in the novels. He’s not nearly as awesome there.