Despite the stereotype of nerds, geeks, dorks, and suchlike having no friends and being insulated from the world, even the most nerdy person has someone to call a friend. I’m proud to say that even at my lowest points I still had someone on my side to do nerdy things with.

Here are six of the… well, “best” isn’t the right word, so let’s go with “nerdiest”… things I did with my friends while growing up. 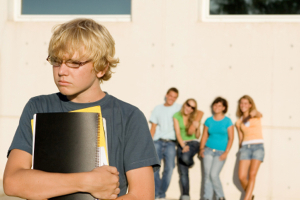 Betcha this kid had more friends than you thought.

6. Made a movie. — No, not all nerds who put themselves on camera are the Star Wars Kid. Some of us get together to make actual short films. This was before the proliferation of smartphones, mind you, so we had to have an actual camera, with actual tape, and an actual tripod. In my junior year of high school, some friends and I made a short film about our love for Mr. Pibb, in the form of a quasi-Arthurian quasi-Python series of loosely-connected sketches. I was on-hand for three sessions of filming, and I still have the VHS tape of the final product. I still talk to the two stars of the film from time to time — they played King Richard the 493rd (Lord of the Masks) and Sir Tripsalot the Dexteritally Inept (who, partway through, died of blood loss after stubbing his toe because he’d fallen into the Crick of Hemophilia); both are successful developers, one of iOS apps and the other of computer games you’ve definitely heard of.

Fun fact! The final scene — which was the only scene of mine that remained in the movie — was shot after school one evening, by the light of car headlights in King Richard’s backyard. It was then edited in the next day, and the film ends with one of the stars saying “there’s the bell for third hour; bye!” (The film was for the stars’ third-period class, as I recall.) 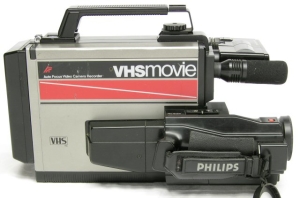 5. Stole a business plan from a movie. — My best friend and I watched a lot of movies together over the years. One of them was Sneakers, starring Robert Redford and Sidney Poitier, in which a bunch of older computer and spy guys get together to form a sort of A-Team supergroup that stumbles upon an evil plan that I can’t quite recall. We thought, with our intellect and wide-ranging knowledge, that we could do something similar. This was 1993 or 1994 (whenever the film was released on VHS), but the closest analogue to what we wanted to be was Veronica Mars. The discussions petered out the night we watched the film, and were never raised again, but it was fun to talk about.

Fun fact! Back in the day, Radio Shack used to sell systems to put your lights on remote controls, long before there were smartphones. And I’m not talking about The Clapper. Well, my best friend had his room hooked up with these things, and I thought they were the coolest. I had plain old switches. 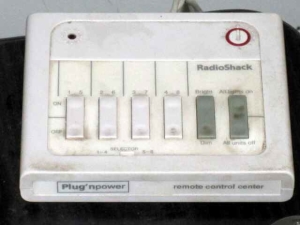 To his credit, my best friend’s remote was never this filthy.

4. Made up a stupid club on the spot. — The aforementioned best friend changed schools after third grade. From first through third, he and I ostracized another kid who just wanted to be our friend*. Well, on the first day of fourth grade, our teacher (who knew us from previous years) said, “there’s this new student joining us, and I’d like you and Thunderhawk** to be friends with him.” Thunderhawk and I happened to notice that both of us were wearing Casio Databank watches (I mean, we were nerds), and that the new kid was wearing one too. So we keyed in on that and formed “the Databankers” without discussing it with each other. It’s like we had the perfect moment of nerd clarity. The new kid seemed fine with this, and the three of us were friends all year.

Fun fact! I was super into watches until age 30 or so. I still wear one, but I’m not a fanatic anymore. Anyway, in fourth grade I used to wear two watches (on the same wrist) most of the time. Because that was cool. 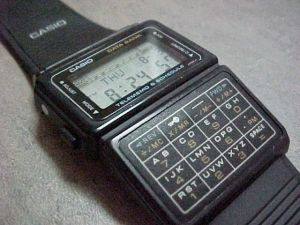 3. Pretended to have cool technology. — Speaking of “cool” things to do, I used to have a pocket computer that was basically just a calculator with a keyboard that I could write simple BASIC programs on. After I lost that somewhere in my disaster area of a bedroom, I made do by folding a piece of notebook paper into horizontal quarters and turning it into a hand-drawn pocket computer with a tiny but full-featured monitor and a way to read diskettes, a phone, a weapons console, and several other things that I can’t remember at the moment. I made several of these over the latter half of elementary school, and I thought I was uber-cool for inventing these magical devices (and pretending to use them). Sadly, I was not uber-cool. Just creative and nerdy.

Fun fact! In 1986, my dad got a convertible, and it had a car phone in it. Not a cell phone, but an actual car phone, that could not be removed. For security reasons, when we went somewhere, we’d take the handset out of the car so people wouldn’t try to steal it. It was kind of awesome. 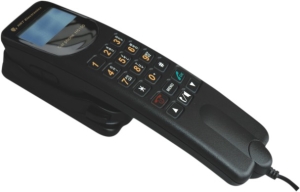 2. Sang about a TV show. — Animaniacs premiered in the 1990s and I loved it. Still do, as a matter of fact. To the point that I used to sing about it, even when it wasn’t on. I have two stories about this:

Fun fact! The very first song we performed was an original composition by me called “Don’t Go Swimming In The Supermarket Parking Lot”. I barely remember the lyrics or the chord progressions, except that the chords were all backward versions of simple chords we’d learned — mostly D and G, and a little A. Me and the Pearl Jammer played it, and Jesus sang it. I was proud, even though we sucked — but it was okay, because at that point everyone in the class sucked.

1. Wasted our money on new technology. — My best friend and I were super-guilty of this, but the most egregious example I can think of is: at some point in my junior or senior year of high school, he got a CD burner. One Saturday I brought a bunch of CDs over to his house and we spent literally four hours copying tracks, painfully, one at a time, until the CD was done. That one blank CD cost me $17, and it wasn’t the first one I bought. Oh, and back then, CDs weren’t rewritable; once it was burned, you were done. Given that I had a CD player in my car (a Discman, but still), and a five-disc changer in my room, and tape decks everywhere, you’d think I wouldn’t have wasted all that money. But I did, and to this day I still waste money on new technology. We never change, I suppose.

Fun fact! We also used to call each other at 10pm every night to listen to the Top Ten at Ten together on SHE 103 (which is now an internet station, a thing I didn’t know at the time of this writing). We stopped doing that once I had a girlfriend****. 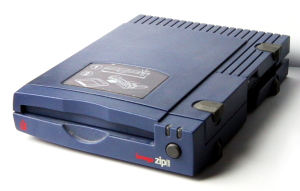 My best friend also had a Zip Drive, for some reason.

Why am I telling you these stories? Well… for one thing, nostalgia. It’s fun to think back on the things that I enjoyed doing as a kid, because even in the 80s and 90s kids were vicious little assholes***** and anything that shines a positive light on my school days is nice to think about. I mean, yeah, I learned a lot and had some fun, but most of my fun was with a very small, select group of compatriots and not as part of any popular crowd whatsoever.

TV shows and movies romanticize the outcast trope, but the reality of it is a lot rougher. It’s hard enough to be a kid when you’re athletic, in-shape, talented, and popular; imagine how exponentially more difficult it is when you start taking those things away. So these little moments of nerdy win, when I could just be myself and actually enjoy myself, are worth sharing.

At least, I think so. 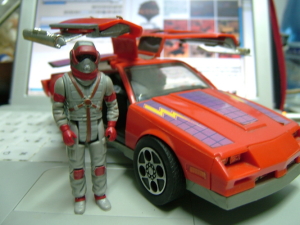 * Because, no matter how low you are on the totem pole, there’s always someone you can bully.

** As you can probably tell, I’m not using real names in this article. Though if I had been friends with someone named Thunderhawk, it would’ve greatly increased my cool factor. I think.

*** Later we added The Guy Who Later Became A Heavy Metal Guitarist, and another time I performed with New Found Glory‘s lead singer, before he was famous.

**** In true nerd fashion, she went to another school. In fact, both of my serious high school girlfriends went to other schools. When I got to prom, my classmates who hadn’t met her (most of them) were flabbergasted that I hadn’t been lying for the entire year.

***** Especially the other counselors at the summer camp where I worked. My awful summer camp experience has been worked into a brutal horror story where the main character becomes addicted to endorphins partly because of the abuse he endured at summer camp. It wasn’t all of them who did this, but there were several regular offenders.