Thoughts of Dog is by far one of the cutest, sweetest, most heartwarming Twitter accounts you’ll ever read. Created in March 2017 by the same people who bring you WeRateDogs, it’s the story of a dog who has a very busy life, full of snoozles, stretchems, skittle watching, and generally making people’s lives a little bit better.

But as I’ve pointed out in several other columns over the past few years, wisdom can be found in some of the strangest places, and Dog Feelings is one of them. Here’s six of the best lessons we’ve learned this year from Thoughts of Dog. 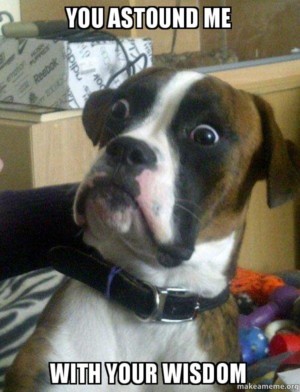 6. January 15 — my fren. has carefully selected. his bone for the day. the problem. is that now i want that bone. and yes. there are plenty. of other bones. in the household. with identical attributes. but none of them compare. to the bone. my fren has right now

The lesson: Something someone else has is more attractive than anything else that you can get for yourself.

The wisdom: Control your jealousy, and know when it’s just envy. You can be envious that someone else has something great, but being jealous is where things get dangerous. And if there’s plenty of other great stuff around, why not find something equally great that someone else doesn’t have? You may see that hot guy (or girl, or whatever) and say “I want that guy even though he’s in a relationship,” but I assure you there are many, many more hot guys out there. And, really, it’s just based on looks — what our dog friend calls “identical attributes”. That hot guy may be a giant butthead. Why put the energy toward him when there are unattached hot guys who, yes, may be giant buttheads, but you don’t have to fight for them. Then you get into the sunk cost fallacy with yourself, and that’s no fun either. 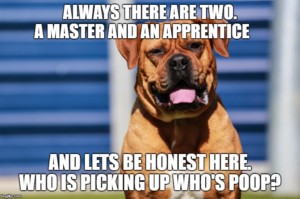 5. February 1 — occasionally. if i see a car come down the street. i will trot swiftly. across the household. while letting out. tiny half borks.. this is to warn the car. that i am to be taken. seriously

The lesson: If someone’s not paying attention to you, why are you trying to assert your awesomeness?

The wisdom: Look, I get it: we all want to be associated with famous, or powerful, or larger-than-life people. But just like our dog friend wants to tell the car that he’s SRS BSNS and the car ignores him, so too should you not get caught up in that mess either. Don’t self-aggrandize to anyone, but especially not to people more famous, or powerful, than yourself. They’re not paying attention to you. This is especially difficult when you’re a fan of a smaller internet celebrity, because those folks are working really hard to engage with their audience. Trust me: as nice as they are, odds are good they won’t remember you no matter how great you say you are. 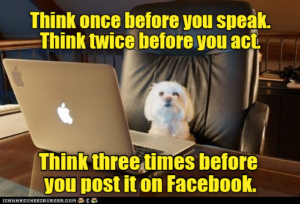 4. March 19 — sometimes. when i’m outside. performing my obligatory yard shenanigans. the human will call me. but i pretend not to hear them. so the shenanigans. may continue

The lesson: If you didn’t hear the instructions, you have plausible deniability.

The wisdom: We all wish there was a little more time in a day. I certainly could use a couple more hours to write, read, watch Netflix, and complain about not sleeping enough. But since that’s not a real thing, we need to grab as much time as we can. Sometimes that means we need to pretend we didn’t hear someone telling us to do something just so we can get that extra dish washed, or that extra minute of sleep, or that extra time to finish some work. It’s not exactly the best thing to do, but since we all do it, let’s just focus on not overdoing it. 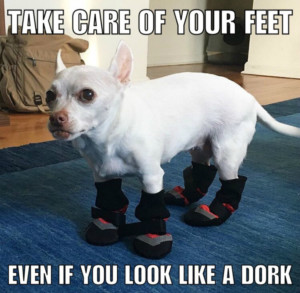 3. March 28 — i didn’t do. much of anything today. but that’s alright. it’s best to stay consistent

The lesson: Be consistent.

The wisdom: Pets are consistent. Especially dogs. If you do the same things with them, they’ll react generally the same way with you. All animals, humans included, love consistency and routine. It’s nice to break out of it from time to time, but for the most part, we live our lives on habits and regular behaviors. There’s no need to fight against this. Embrace it. 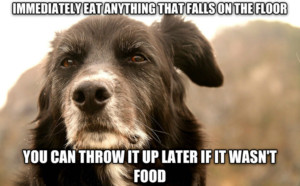 2. February 3 — sometimes. there’s a fellow pup. on the tv. and i try to tell them. i enjoy their work. but they never hear me

The lesson: Inserting yourself into someone else’s narrative never works out the way you want it to.

The wisdom: Everyone wants to be a part of something — especially when it comes to gatherings. So we travel through groups in a sort of Brownian motion, hoping to hear something we can use as a tiny crack into which we can wedge ourselves. If you’ve seen Love Simon, the scene where Nick is driving everyone to Bram’s house and Martin keeps trying to start conversations with Abby is pretty much exactly what our dog friend is doing. Just be yourself and don’t force yourself into other people’s stories. If they want you there, they’ll make it clear you’re welcome. Otherwise, you’ll just get upset with yourself for failing to land where you want to. 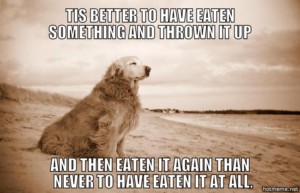 1. January 27 — i had a long talk. with my fren. about how to spot. a fake ball throw. the optimal strategy. is to follow the ball. with your eyes. instead of your heart

The lesson: Think before you act impulsively.

The wisdom: This is a hugely important lesson, and it’s been at the top of Dog Feelings for quite a while, probably because it’s both cute and insightful. It’s also a problem I have. If I want to do something, and I get excited about it, I tend not to look at any of the possible problems because I want it so bad. I’m thankful that my wife helps rein me in when I get this way, but realistically speaking this is something that all humans do to a certain extent. Think about the last time you applied for a job, and how you started mentally planning out how your life would change; think about that person who went out on one good date with you, and how you knew she was The One. We get excited and we plan ahead and we don’t stop to consider what might happen if this great thing doesn’t come through as planned. Don’t stop getting excited, but at least take a moment to think realistically before you change your entire life to accommodate something that might not even happen. 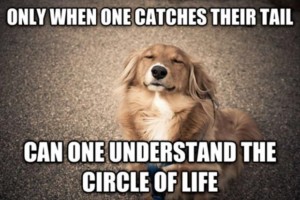 Right around the same time I discovered Dog Feelings, I also came across Blake Bortles Facts, which is by far one of the funniest Twitter accounts I’ve seen in recent memory. The tweet that pretty much made the account famous was along the lines of this one:

It’s exactly true… while also being kind of ridiculous. Blake Bortles isn’t a bad QB (compared to a lot of others in the league), but I don’t think he’ll ever be as great as Tom Brady — and that’s coming from someone who hates the Patriots with the burning intensity of 1000 suns. Bortles will certainly not win five Super Bowls in his career — there’s a reason only one person has done that. He might make 13 Pro Bowls, but it’s unlikely. And it’s really hard to be NFL Offensive Player of the Year more than once.

But the nice thing is that it’s not just Blake Bortles. If you think about it, Tom Brady and I have also combined for five Super Bowl wins, four Super Bowl MVP awards, and so on, and so on. It’s a little silly, sure, but it’s fun. Try it and see how long it takes your friends to catch on. Maybe not about sports, but about something you are good at. For example, Neil Gaiman and I have won a combined six Hugo awards. 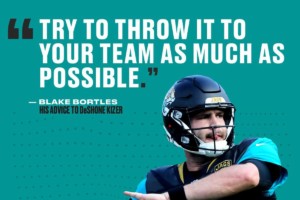