SIX OF THE BEST… things about writing by hand

I’m doing it by hand.

Here are six of the best things I’ve discovered (or rediscovered) about doing it this way. 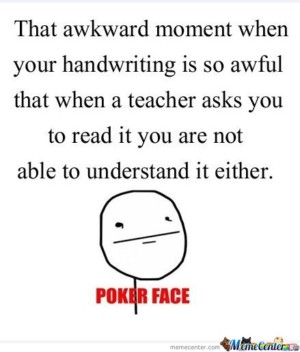 6. You can do it anywhere. — To write by hand, all you need is a pen, pencil, marker, or crayon; some paper; and a place to lean. I find that I’m writing a lot on my lunch breaks at work. I can bring a notebook on an airplane and not have to worry about the person in front of me reclining the seat into my space*, or the tray table not being fluffy-flier-friendly. I can write at the doctor’s office, in line at the DMV, or even at home at the dining room table. I even once wrote most of a story walking on an elliptical machine. Anywhere.

Something I wrote by hand: I attended the Taos Toolbox writing workshop in 2013, and the story I sent in as my audition was “Return to Waypoint 5”, which I originally wrote by hand. There are actually six stories in that series, and I started working on the seventh, but I think in the end it’ll become a single book. 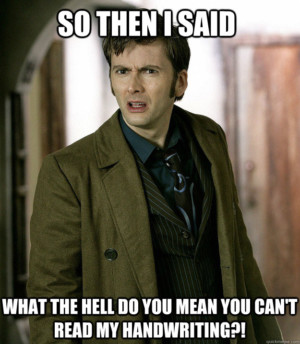 5. You don’t have to restrict the topic of your story. — Sometimes I write things that are extremely violent (I write horror, after all), or things that have explicit sexual content (sometimes in my horror stories). I write about uncomfortable topics, profane topics, and even occasionally illegal topics (things that my characters are doing that are illegal). But when you’re at work, or a library, or at school, anything you write is fair game to be viewed by IT and held against you if you write naughty things. Not so much when you’re just writing in a notebook that you can put away.

Something I wrote by hand: I’m currently halfheartedly working on a story I started back in 2013, about a princess in a quasi-magical world whose parents were sent to another dimension by an evil wizard and who must team up with a teacher (hired by her grand vizier to help her learn to rule fairly) to figure out how to save them. I’m up to twelve “chapters” (about one thousand words each). I like how it’s going, and I have an endgame in mind, but I haven’t worked on it much lately. 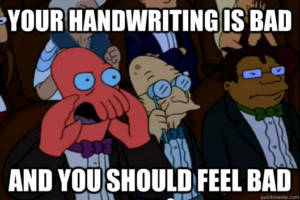 4. You own everything you write. — Technically, and related to the above point, your office, library, college, or even internet cafe could possibly lay a claim to anything you wrote while on the clock. All writers write while they’re at work, if they work on a computer, but it would certainly suck if your latest awesome book came out with your CEO’s byline instead of yours. But it’s your notebook. You own it.

Something I wrote by hand: Also in 2013, I hand-wrote a novella (I think it ended up being a little over 30,000 words) about a girl who comes to live with her older brother because her parents don’t accept or understand her, and the adventures she has with his family. I’ve been working on revisions to it on-and-off for the past few years. 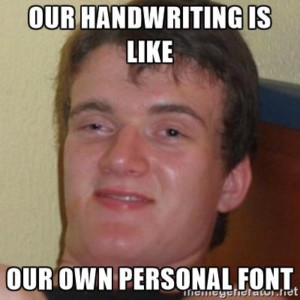 3. You don’t get as distracted. — Writing is by far one of the easiest things you can not do. There are all the distractions. And if you’re writing on a computer, you’re bound and determined to check Facebook, google facts, answer e-mails, and if you’re at the office you might even have to do some work. Now, if you’re writing by hand at the office then work might still intrude, but if you’ve got your face in your notebook and your hand is moving across the page, you’re less likely to stop and check your phone or your computer. I do happen to wear a smartwatch and I do check it when it vibrates, but unless it’s something important I just ignore it.

Something I wrote by hand: I have a friend who shares with me the various parts of her life as a graduate student. One of the stories I wrote in the past two weeks was based heavily on something that happened to her. The second draft is done, which means that I typed the hand-written parts into a document, but I haven’t done much editing. 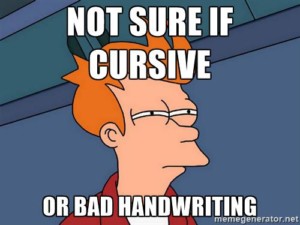 2. Editing is more natural. — This is a twofold one. First of all, as you hand-write, you can make notes in the margins and not bother editing at the moment, or put little marks (I use asterisks) and write other parts off to the side. You don’t actually go back and make changes unless you’re absolutely sure, because that means you’ll be crossing out things you’ve written. It’s more weighty than just pressing delete. Secondly, when you actually type the story into a document, you’ll naturally make minor edits as you go. You can also do research (I’ll put items that need changes or research in [square brackets]), check spelling, send bits to other people, and, most importantly of all, re-read what you’ve written and see how it feels when you see it again.

Something I wrote by hand: Three years ago, I attended the Ellijay Apple Festival. Then I came home and hand-wrote a story about it. It’s been edited, and is probably ready to either sell as-is or include in anthology. Not sure yet. 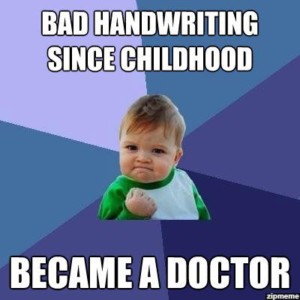 1. You have something to show for it. — This may be the biggest plus of all when it comes to writing by hand. When you write on a computer, you can see your file list grow and you can watch your word counter increment, but when you’re done you just hit “save” and go about your business. You have nothing physical to show for it. But when you write by hand, you fill page after page with your own handwriting, and you can look at the story when it’s done and say to yourself “I just filled 500 pages of paper with my fiction.” Sure, it’s kind of a waste of paper in a world that needs to think more about conservation, but sometimes you just have to make sacrifices. Plus, you can always recycle your notebooks after you transfer the words into a document.

Something I wrote by hand: My current write-by-hand project will either be a novella or a full-length novel about a couple and their teenage daughter. I’m still trying to figure out the main plot of the piece, but I’m one-and-a-half chapters in and I’m really enjoying getting to know these characters. We’ll see how it goes. 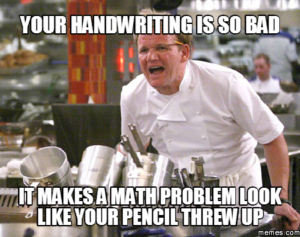 My handwriting is atrocious. Probably some of the worst I’ve ever seen. I have a friend who’s a doctor and mine is much worse than hers. Most people can’t figure out more than half of what I’ve written, and it takes a concerted effort sometimes even for me to figure it out.

Don’t believe me? Check this out. 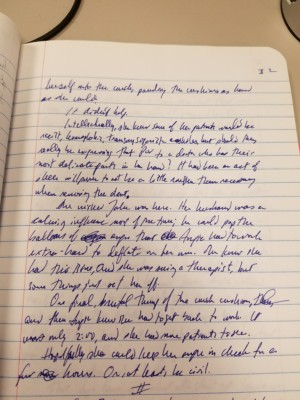 And that’s another benefit to writing by hand: people have no idea what I’m writing until I’m ready to share it with them. They can try to figure it out, but it’s not easy.

Of course, it’s not easy for me either, but given how much I’ve written in the past two weeks, I think it’s worth the trouble.

Plus, I can see how excited I am about a part of the story because the handwriting gets even worse, and the more sections there are like that, the better the story is. In my opinion, anyway. 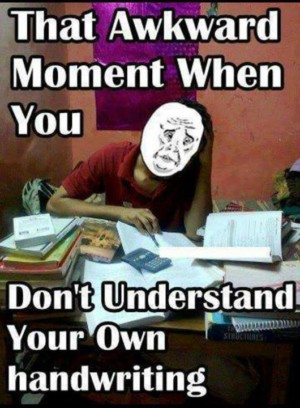 * Although honestly if you just check Seatguru you can avoid seats that face this issue.